Gossip mill: Nancy Sit quarantined after using same studio as singer who tested positive for Covid-19 - and other entertainment news this week

Her diagnosis sparked fears that the infection might spread, especially among Hong Kong entertainers. One of them is veteran Hong Kong actress Nancy Sit.

She had unknowingly used the same studio as Zaina on the same day the singer was there, though she did not meet Zaina in person. Speaking to Shin Min Daily News on July 23, the 70-year-old said that after visiting TVB last Wednesday and Friday for a recording, she received a call from her colleague asking her to get tested for Covid-19.

Nancy is still waiting for the result of her test but has quarantined herself for the time being. She also admitted to being worried about the result.

Staying at home is actually not easy for her too, she told the Chinese daily.

"You know me, when I'm not working, I'm usually out getting my nails done, shopping, and trying on new clothes. Now that I have to quarantine myself at home, I'm not sure what to do."

But she's taking this downtime to clean up the house, practise her singing and brew tonics to strengthen her immune system. As for her meals, her son, who lives next to her, takes care of it.

Wong Jinglun makes surprise announcement about his marriage and baby

The 37-year-old has gotten hitched and is expecting a child with his newly-minted wife. Jinglun started off on the local talent show Project Superstar before going on to participate in Taiwanese singing competition One Million Star. Since then, he's been making his mark as a singer in Taiwan.

His announcement came as a shock because he previously told Lianhe Zaobao back in January that he wasn't getting married because he had no money. He echoed his response to Apple Daily Taiwan in June as well, though he admitted that he has been dating someone for four years and she has met his parents.

Not much is known about his wife as she prefers to keep a low profile, but it was reported that she's 28 years old and works in an airline company. The pair first met at a friend's gathering.

Speaking to Lianhe Zaobao, Jinglun said he was "surprised" to hear the news about his wife's pregnancy and felt it was a "gift from the heavens". When asked about keeping his marriage a secret from the press, he explained that the "time wasn't right" then and he didn't want to risk offending the various media outlets by giving an exclusive scoop to one of them. 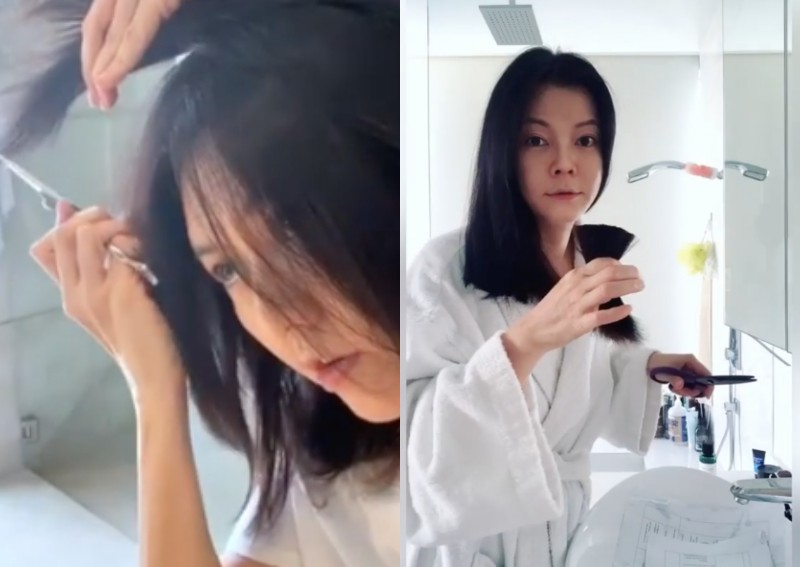 Though Phase 2 of Singapore reopening is in full swing and hair salons are fully operational, not everyone is flocking to get their lockdown hair in check.

On July 21, local artiste Michelle Chong surprised fans by uploading a video on Instagram of herself cutting her own hair in front of a bathroom mirror. Yes, you read that right. No celebrity hairstylist for Michelle because she's "very lazy".

She wrote on her post: "People never believe me when I tell them I cut my own hair sometimes. Because I really am very lazy to drive all the way to the salon and sit there for such a long period of time. I guess with Covid I have more of an excuse not to go now."

As for Singaporean songbird Stefanie Sun, she shared a nicely edited video (complete with background music) of herself giving that mane a trim. If you've watched the video, you would not be faulted for thinking that it's not Stefanie's first time giving herself a DIY haircuts — she was as good as an amateur hairstylist.

Her publicist told 8 Days that the singer gave herself a haircut "on a whim" and she "has been very into cutting her own hair for a while already".

ALSO READ: Gossip mill: How Moses Chan and Wayne Lai resist temptation in showbiz - and other entertainment news this week