No parent wants to see their child get hurt, but sometimes accidents happen.

Unfortunately, local actor Wang Yuqing, who has three sons aged 28, 20 and 19, has a painful memory of when one of his sons got injured when he was in childcare.

The 61-year-old recounted the incident to AsiaOne during a recent interview together with Gurmit Singh, 57, for the Channel 5 drama series Sunny Side Up.

"He was playing and a bicycle accidentally smashed his finger and you could see the bone because the whole piece of flesh fell off. There was blood all over him. When my wife called me, I was filming so I couldn't rush down," Yuqing said.

Because his son was too young, doctors couldn't inject him with anaesthesia, so they just stitched up his finger. "From the way he cried, you could tell he was very helpless and as a parent there was nothing you could do to help him."

Yuqing also spoke about seeing his son's finger that night when he came home.

"His whole finger was flattened. I hugged him and asked him if it hurt and he said no. But my heart was aching. Why did something like this have to happen to a young child?"

Till today, he considers this to be one of the more unpleasant memories he has as a parent. 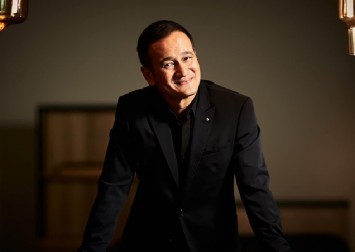 When asked about his parenting style compared to his character's, Yuqing remarked that both are quite similar. "I'm quite strict actually," he said. "I want my children to do their very best and follow what I say."

An example he gave was how he ensures that his children study hard. "When I was young, I didn't like to study and my parents didn't really force me to do so. Now I feel the need to emphasise this to them... it's the same in the show, like how I want my [onscreen] children Anthony (Marc Valentine) and Geraldine (Ling Ying) to do their very best."

Upon hearing this, Gurmit joked: "You're so similar to your character, that means you're not acting, we should cut your pay."

In Sunny Side Up, he plays Alex Rajendran, a father of two who marries Christine Tay (Gina Tan), a divorcee with three kids of her own. The union thus creates a new blended family where all seven of them have to learn how to live together under the same roof.

The Phua Chu Kang actor, too, has moments where he felt helpless as a parent.

When he was in Kuala Lumpur filming Phua Chu Kang for three months in 2010, he received a phone call from his wife informing him that their son Elliot was down with a high fever.

"The more I thought about it, the more worried I got. I tried to be brave in front of my wife on the phone... After I put down the phone, I was supposed to go back on set but I excused myself and walked further away to where nobody could see me. I stood there and I cried. I cried because I felt like a useless father," Gurmit admitted.

Although his son recovered after a few days, Gurmit said he felt like "the worst father in the world" that night.

Thankfully, both Gurmit and Yuqing's children are doing well.

As Father's Day is around the corner, AsiaOne also asked the two actors what their plans are for their special day.

"No need, please don't waste money," laughed Yuqing. "My kids are still young but they will wish me Happy Father's Day. If we do celebrate I'm the one paying because they're not earning yet."

Gurmit, on the other hand, shared that he plans his own Father's Day celebrations and gets his family to join him.

However, he remained tight-lipped about his plans this year.

"Eh cannot lah, later people will see me go to this place and they'll come and find me!" he joked.

Catch Sunny Side Up on Channel 5 and on meWATCH every Monday to Thursday at 7.30pm.