The year of the Pig is almost upon us and some very famous households will be welcoming a new addition to their brood this year.

While most of us are pigging out on Chinese New Year goodies, these celebrities will be busy baking buns in their ovens (and mamas-to-be will have a legit reason to feast without guilt).

With this list, whenever the word 'baby' is mentioned at the reunion table, you'll have something to add to the conversation.

Another pig baby joins the fray!

Myolie Wu revealed in an Instagram post (Jan 29) that she was pregnant with her second child and due in the year of the pig.

Her businessman husband Philip Lee also shared a post on his personal Instagram page, along with the caption: "Well it looks like Brendan has worked out that something’s cooking because he keeps pointing at Mummy’s belly - his new best friend and playmate."

The 39-year-old TVB actress had previously admitted that she hoped to have another child to accompany her first, 15-month old Brendan.

"I’m getting older, so if I do have [good news], I’ll be sure to tell everyone. I’ve been trying hard for a long time. I want a pig baby. My sign is sheep, my husband is ox, my son is chicken, so our family is like a farm," she said to Chinese media outlets. 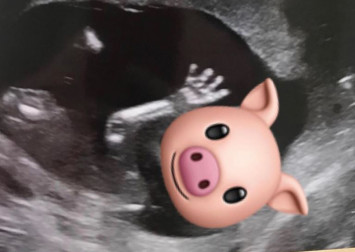 Looks like her wish came true and her piglet is on the way!

After months of speculation, the Heavenly King finally confirmed that his wife is pregnant with their second child. The notoriously private couple, however, has decided against revealing details such as the gender and due date for now. 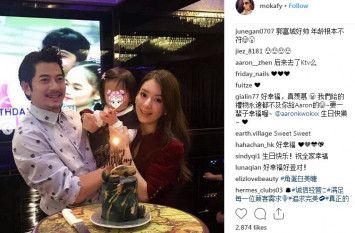 Kwok reportedly missed the birth of his first child due to filming commitments and so told the media he planned to put acting activities on hold for the first half of 2019; he would go on a concert tour instead.

The Hong Kong power couple announced they're expecting a baby a month after they tied the knot on a yacht in Oct 2018. They first found out about the pregnancy during their pre-wedding photo shoot in England.

Thanksgiving is about celebrating and being grateful for all that we have. So on this special occasion, my husband and I are excited to share one of the biggest gifts that God has blessed us with... We’re having a 𝐵𝒜𝐵𝒴! ❤️☺️ Though we have so much to learn about being parents, we promise to do our very best to take care of the newest addition to our family!

Mama Grace subsequently shared that they were expecting a boy and wondered if he was "going to love tennis as much as his daddy".

Excited to meet little baby Kevin! I wonder if he’s going to love tennis as much as his daddy! 🥰🎾

The former TVB actress and Miss China International (2010) married in 2016 and announced in early Dec last year that her first child's on the way.

After Nicky Wu's mother spilled the beans to Apple Daily Taiwan, the actor took to Weibo to confirm that he and actress Cecilia Liu are indeed looking forward to a new addition to the family and thanked everyone for the well-wishes.

Father-to-be David Tao is expecting his first child (nicknamed 'BonBon') with his wife Penny Chiang whom he married in 2014. The 49-year-old once said he hopes to have three kids so that they can look after Chiang, who is 16 years his junior, in the future.

Popular Singaporean blogger Hong Qiu Ting (better known as Bongqiuqiu) is pregnant with her third baby. She wrote that she "finds it a little weird (that she's) growing a penis inside" her.

Duke and Duchess of Sussex announced that they are set to become a family of three and baby Sussex will be seventh in line to the throne.

A new year, a new Kardashian-West in the oven of a surrogate mum.

This is a party of six in the making (We're not counting the extended family)!

Exciting news ! Happy new year from all the Ramsay’s

The Ramsay household rang in the new year with a surprise announcement on Instagram. It featured a very pregnant mama Ramsay.

Due date: "I have a big mouth and all but seriously?!" - In response to a question on his Instastory about the baby

Gender: He's keeping mum on this one too

Comedienne Amy Schumer first shared that she's pregnant - at the same time as the Duchess of Sussex (Oct 2018) - sparking off a one-sided pregnancy announcement 'war'.

About to announce some exciting news on @jessicayellin insta page. Please follow her for up to the minute #newsnotnoise she breaks down what’s really going on. She agreed to post a lil noise today for me! Follow her and VOTE!!

Pregnancy announced via: A friend's Instastory - In true Schumer fashion, she directed fans to the profile of journalist Jessica Yellin, who posted Schumer's recommendations for the upcoming US midterm elections.

The list ended with the words: "I'm pregnant - Amy Schumer".

These Asian celebs are expecting babies next year