'It's normal': Eric Tsang seen kissing 26-year-old Malaysian model at her birthday party but claims he doesn't know her

Whether he knew her or not, Eric Tsang certainly got comfortable with her.

In an Instagram post last Friday (Sept 30), Malaysian model Lebara uploaded a video of her birthday party where she was kissed on the mouth by the veteran Hong Kong actor.

"This year, Eric was here to blow out the birthday candles with me; my birthday wish this year is for world peace and for there to be no hatred," Lebara, 26, wrote.

In the video, 69-year-old Eric could be seen clapping along to a birthday song and singing.

As they reach the end of the song, Eric walks over to Lebara and puts his hand over her shoulders, giving a short speech in Cantonese.

He then bends over and blows out the candles with Lebara, before kissing her nearly on the lips.

Speaking to Hong Kong media about this incident, Eric said he wasn't even aware of who Lebara was.

He explained he was dining with a friend when another friend found out that he was at the venue. The latter then invited Eric to join Lebara's birthday celebration.

He also explained that he didn't feel bad about having kissed her: "People who already have a guilty conscience would regret it, but I don't think I'm guilty of doing anything wrong."

Eric bluntly added: "It's normal to give birthday kisses."

He also believed that the person who uploaded the video wasn't someone he was acquainted with because his friends wouldn't have done so. 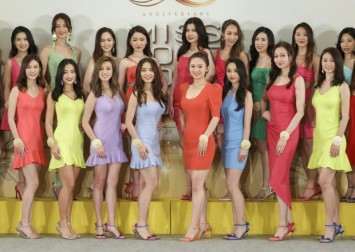 According to Next Apple News, Lebara is the god-daughter of prominent businessman Lawrence Yu and often attends high-profile events and parties.

Eric has been in the headlines recently. He's the general manager of TVB, the Hong Kong broadcasting company that holds the Miss Hong Kong beauty pageants and which came under fire for their portrayal of women in the competition.

Last month, Helen Yu Lai, a member of the Independent Police Complaints Council and a former senior government official in Hong Kong, commented on the portrayal of sex and violence in the media, South China Morning Post reported.

"It is okay to wear less clothing — you can do so for swimming — but why should they (Miss Hong Kong contestants) be answering questions in an air-conditioned room with someone like Eric Tsang staring at them?"

Responding to this, TVB threatened legal action against Yu Lai and maintained that they adhered to stringent broadcasting regulations on TV.

Recently, it was also revealed by Miss Hong Kong 2021 contestant Wynn Jiang that she and other participants were made to change into swimsuits during the auditions so Eric and other TVB executives could "take a look" at them.

The whole process was reportedly recorded on camera and the executives would judge them based on their appearances and personality.