'It's not taboo': Xiang Yun writes her will, signs lasting power of attorney

Xiang Yun isn't afraid of talking about death and has written her will and signed a lasting power of attorney.

As she ages and her mortality becomes apparent, Xiang Yun isn't beating around the bush when it comes to death.

In an Instagram post last Friday (Aug 26), Xiang Yun shared her decision to write her will and grant a lasting power of attorney (LPA).

"Over the years, I've seen that life is fleeting and anyone can be caught off guard. So it's time to make choices while you're still healthy, which is what I did," the 60-year-old veteran actress wrote.

She also stressed in the post that there is a difference between a LPA and a will, which many may not understand.

Xiang Yun wrote: "A will can only take effect after the person's death. The LPA is utilised when the person loses mental abilities from incidents such as sudden accidents, strokes, or dementia.

"These afflictions result in a sudden loss of cognitive ability and cause an inability to handle personal affairs for the rest of their life. In the event that this happens, the LPA allows an appointed person to act on their behalf. The LPA is also dissolved immediately upon the donor's death."

She reportedly wrote her will and signed an LPA last week, according to a Shin Min Daily News article on Aug 31.

Although her husband Edmund Chen, 61, was supposed to join her for this significant milestone in life, something came up at the last moment and he was occupied, Xiang Yun said. 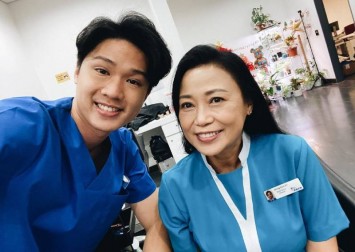 In the interview, Xiang Yun also explained that she was first inspired to write her will and sign an LPA after she spoke with lawyer Qua Biqi during episode 22 of the meWATCH talk show, Silver Carnival.

Silver Carnival is hosted by Xiang Yun, Seow Sin Nee, Jernelle Oh, Gini Chang and Juin Teh, where topics around exercise and health are discussed.

Said Xiang Yun in the show: "If people in the final stretch of their lives want to live with dignity, I've always felt that they need to contemplate deeply the issue of mortality."

She reiterated in the interview that there is a need for the discourse around death to be more widely addressed.

"I think this is the right thing to do and it's not taboo. If you deal with this in advance, you will feel more at ease."

ALSO READ: 'The price is definitely not healthy': Pan Lingling and Xiang Yun are selling traditional mooncakes at $168 per box