Jack Neo faced discrimination for not being able to speak English, new film shows how tough it was for 'Chinese helicopter' folks

It was the 1980s, Singapore was shifting towards bilingualism and many citizens were finding it challenging to pick up a new language — English.

For local director Jack Neo who is Chinese-educated, he wasn't spared by the winds of change and was discriminated against for not being fluent in English.

As people slowly adopted English as their first language, he found it increasingly difficult to communicate. It wasn't just him, he said, but those who were 'Chinese helicopter' like him.

The phrase, which is used in the movie, reportedly originated in the army, where poor English pronunciation resulted in the words 'Chinese educated' sounding like 'Chinese helicopter'.

Jack told AsiaOne in a recent interview: "Why I was more detailed about the challenges of transitioning from Mandarin to English was because myself — and those who were Chinese-educated — really experienced it. I will not say we really suffered but there was some difficulty, especially at work."

Jack, 60, shared that during meetings (which were conducted in English), colleagues were quick to make a face or snarky comments when he couldn't communicate fluently in English.

"In the past, we didn't know that was discrimination, but now we do," he said, pointing out that those people were "clearly looking down on me".

Some of the challenges are depicted in Jack's new film The Diam Diam Era, which is the third instalment of the successful Long Long Time Ago series. Set in the 1980s, it explores social issues and iconic moments in Singapore's history, such as adapting to the new government policies and the shift from the kampung to HDB flats.

In the film, Mark Lee's character Ah Kun gets frustrated at the new government policies, including the focus on English as the first language, and decides to set up an opposition party.

During a set visit last year, Mark explained that while he understands the policies were in place to build and secure the country's future, his character doesn't see it that way. For Ah Kun, he only sees that the people who came from the kampung were not represented and he chooses to step up.

The same sentiment was echoed by Jack as he explained that the film, despite its politically-charged trailer, isn't meant to be political or a critique of the government. On the contrary, he wants people to understand that the reason we have a stable future now is because of the foresight of the country's leaders in the 1980s.

He explained: "Some of the things in the film that people see might make them nervous and question why it's written like this. But they don't understand that the things depicted in the film have a great influence on the lives we have now.

Read Also
'Siang ka pager?' What can Jack Neo and the cast of The Diam Diam Era share about these 1980s items? 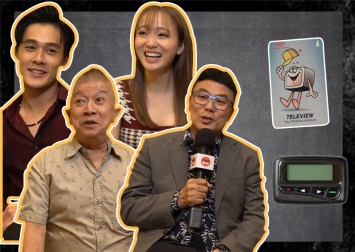 "Why I want to make The Diam Diam Era is because I want people to look back at our history, then compare it to the present, and have the wisdom to understand the relationship between both. For example, if the schools didn't switch to English back then, wouldn't we be suffering now?"

Jack added that due to English being our first language, we're able to "connect to the world" and these are "the good things that I seriously want people to think about".

Unlike his other feel-good films like I Not Stupid and Ah Boys to Men, this isn't a "simple family story", and he hopes viewers will take the time to look beneath the surface and realise the depth and complexity of this film, which seeks to explore a chapter of Singapore's past and how it has influenced the future.

And yes, the director has the series all mapped out and hopes to create four more films after Diam Diam Era and its sequel that is due to be released early next year.

However, he stressed that fundamentally, the Long Long Time Ago franchise isn't a historical documentary but a film that serves as a love letter to the country. Jack even hopes that foreigners will be able to watch the film series and better understand how Singapore came to be the stronghold that it is.

The Diam Diam Era premieres in cinemas on Nov 26, 2020, and it's rated PG13 for some coarse language. Click here for the movie screening times!

ALSO READ: Meixin, Tasha Low and Richie Koh on the physical 'sacrifices' for their roles in local movie The Diam Diam Era