The 43-year-old star — who has Max, 11, Carey, seven, and four-year-old Charlotte with wife Julia — admitted the idea of his kids being school shooting victims was "beyond comprehension" and hit out at firearms legislation in the US in the wake of the mass shooting at Robb Elementary School in Uvalde, Texas, on Tuesday (May 24).

Speaking during a monologue after the recording of The Late Late Show, he said: "As a father, I can't imagine the horror of that phone call.

"When I dropped my kids off at school this morning and kissed them goodbye, it doesn't cross your mind that that could ever be the last goodbye. And the thought of that phone call, that your child is the victim in a mass shooting is beyond comprehension as a human being.

"I'm so deeply sad for the families of these children, the trauma of the survivors and for the future these kids will never see.

"It doesn't make sense to me. It doesn't reflect the country that I think America is, the America I have always admired.

"You have a problem, you solve it. Yet on this issue, America is one of the most backward places in the world." 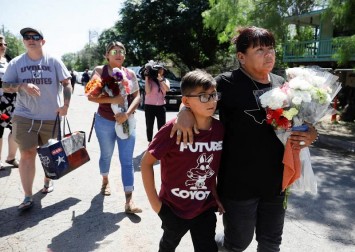 James highlighted the differences in other countries and admitted he won't be surprised to learn about further tragedies in the US in the coming weeks.

"This year, there have been 27 school shootings in America and 212 mass shootings and we are just five months into the year. I'll probably be standing here in a week or two, talking about another place.

"Words of thoughts and prayers will come from our leaders but I fear change never will.

"I hold out hope that this country will eventually change this senseless gun culture and my heart simply goes out to every person in Texas tonight."