'I f***ed up': Jayesslee's Janice confesses younger son was 'born out of wedlock', both sisters now single mums

Janice (left) and Sonia Lee moved to tears from the outpouring of love and support during their Instagram livestreams.

Marital separation is never easy, neither is airing your personal matters. And when you're a public figure, the additional scrutiny from the masses doesn't make it any better.

However, for Korean-Australian twin sisters Janice and Sonia Lee aka the musical duo Jayesslee, they are overwhelmed with support, not scrutiny.

Five years after the birth of her second child Conor, Janice admitted that he was born out of wedlock, and she is separated from her now ex-husband Lee Sung Ho.

She added: "Conor was born out of wedlock and I post this today as a single mum. I couldn't find the words to articulate my stance on the situation, that I was remorseful for what I had done yet unapologetic for Conor's life." 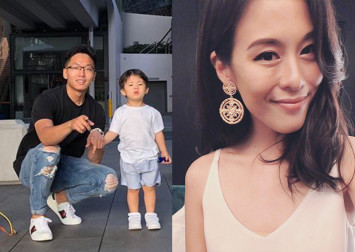 While it hasn't been confirmed by the 34-year-old singer, Conor's father is believed to be David Jeoung, a "mystery man" who popped up on Instagram in 2018 calling the child "the best thing that has happened to my life".

Janice revealed in an Instagram Live today that it had taken her four years to accept the circumstances, during which she even contemplated suicide until her younger twin Sonia talked her out of it.

It was also because of Sonia that Janice was finally able to find the courage to come clean about Conor's birth.

Sonia also admitted to her marital status in an Instagram Live on Sunday, nearly three years after she parted ways with Andy Yang.

While recounting the events that had happened, a member of the audience commented that Sonia doesn't owe anyone an explanation about her private life. Others echoed the sentiment, and within minutes, support poured in for Sonia, some extending to Janice, too.

Sonia pulled her sister into the livestream to see the messages for herself. Both of them were overwhelmed by the positivity, and neither were able to turn off the waterworks.

"Who were these people that we didn't even know the names and faces of, yet seemed to know us well enough to say everything we'd been needing to hear?" Sonia asked in an Instagram post on Wednesday. "I felt safe to let out the tears that I'd only shown to family and friends who were few and far between."

In the interim, Janice and Sonia as well as all four of their children have moved in with the sisters' father.

Since the livestream, they have been "flooded with DMs" offering support, for which they thanked their fans fervently.

Sonia added in the comment section: "Thank you to those who screenshot/recorded the session so I could read through the comments that I missed. You guys are so thoughtful. One of my favourite comments was, 'May you be as strong as your eyeliner.'"