Julia Roberts says constant "kissing" is the secret to a long and happy marriage.

The Pretty Woman star believes the key to her more than two decades of marriage to cinematographer Daniel Moder - with whom she shares 17-year-old fraternal twins Hazel and Phinnaeus and 14-year old son Daniel - is not forgetting to have a smooch and show each other affection while appearing on the The Late Show with Stephen Colbert on Monday (April 18).

After being asked by host Stephen Colbert - who has been married to his wife Evelyn McGee-Colbert for 28 years with whom he kids Madeline, 27, Peter, 22, and 20-year-old John - to reveal her tricks on the count to three.

The 57-year-old talk show host said the key was taking the time to "apologise", and immediately wanted to take it back.

Stephen quipped: "Well, I would like to apologise to my wife for not saying 'kissing'."

Read Also
Son Ye-jin and Hyun Bin are getting married 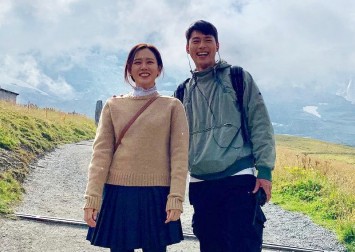 The Oscar winner couldn't help but gush over her co-star Sean Penn, who plays her character Martha Mitchell's husband US Attorney General John N. Mitchell on the Starz show about the Watergate scandal, which was adapted from the Slow Burn podcast by journalist Leon Neyfakh.

She said: "He doesn't want anyone to know how nice and sweet he is because it would destroy his reputation that he's worked so hard on. He had so much patience getting all of this makeup done.

"He just was rock steady. All his stuff on, he would just sit there."

Julia also enthused about working with George Clooney for the fifth time on their new rom-com Ticket to Paradise while "heavily bubbled" due to the Covid-19 pandemic.

Julia said: "We were heavily, heavily bubbled," before saying of George that "everything you think he is, he is more than that."