Kakegurui Twin: A brain-twisting anime to add to your list

Kakegurui Twin is a Netflix original spin-off of the Kakegurui series. Released on Aug 4, 2022, the show attempts to recapture what fans loved about the original by incorporating familiar elements such as the characters and their superhuman perception.

Anime fans are split when it comes to this recent adaptation, which changes certain characters' personalities to the dismay of many.

This review will cover different areas of the series that may or may not have been well received. Reading the manga or binging the original series is not required to fully enjoy the anime.

Those who loved Kakegurui will definitely enjoy this spin-off title, Kakegurui Twin. It closely follows the context and background of having students gamble at their local school called Hyakkaou Private Academy, where your worth as a human being depends on your gambling skills.

Mary is the main protagonist here while Jabami, the previous main character, does not appear, which makes canonical sense as she is set to debut only a year later.

Although familiar faces such as Kaede and Ririka appear in the background, they act as mere easter eggs and serve as a looming reminder that we're still in the same universe. The new cast gets most of the development and screen time here, and many of them have their own quirks that are interesting to watch.

Kakegurui Twin is a fun watch, but it's not suitable for everyone. The animation has greatly cut down their appetite for lewdness, which may please or anger some fans and the beginning feels too rushed. But the animation is as crisp as ever, showcasing fluid transitions and natural movements. 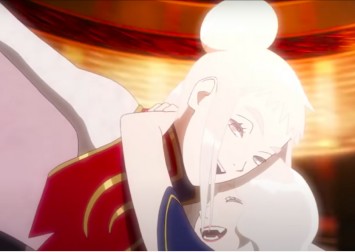 The music is as flamboyant as the original, with an ensemble of instruments bellowing an almost classic jazz-like score. The opening reminds me of Spy x Family and Cowboy Bepop's themes as well, which is always nice.

The voice actors are what really bring life to the characters, with each doing an outstanding job of representing the various character traits and portraying believable reactions and emotions. None of the characters seem annoying and are mostly likeable, even the antagonists in some ways.

But the one aspect the fans are expecting to be phenomenal is the gambling. What complicated schemes will our heroes cook up? What elaborate tricks will our antagonists use to their advantage?

Unfortunately, the games here are much simpler, with dice and cards taking most of the spotlight, and the strategies are more easily understood, but don't let this take away from the suspense as Mary may not have a 100 per cent win rate like her counterpart Jabami.

Kakegurui Twin is definitely an enjoyable if a bit too tame, series that showcases high-quality production values accompanied by interesting characters in an average plot.

Overall, there is much to love here, and it is a solid prequel series as a whole. But those who came in with high expectations might be disappointed to find a lack of originality in the gambling sequences.