Kym Ng on new drama When Duty Calls 2: 'I gave my first onscreen kiss and bed scene to Pierre Png'

While the others protect the country, her character's on the "production line".

In yesterday's (Aug 3) press conference for Mediacorp's new drama When Duty Calls 2, Kym Ng brought the house down when she cheekily recounted an intimate scene she filmed with Pierre Png, dropping details and innuendos that left the latter looking shy.

Kym, 55, plays Loke Mei Guang, the dutiful wife to Pierre's Tan Kim Po. After they got married and opened their craft beer bar, Mei Guang looks to the next step in life — starting a family.

Her mother-in-law Choo Chui Hua (Hong Huifang) also wants them to have children to continue the family line.

"Compared to [the first series of When Duty Calls], my character now does a lot more 'action' with 'hard labour' involved," Kym said suggestively. "While others are protecting the country, we're part of the 'production line'."

As someone who takes the initiative, her character couldn't sit idly by and wait for Kim Po to take the lead, so she does it instead.

Said Kym: "I've never acted in a bed scene before, you know. Ever since I started my showbiz career, I've always been the auntie — I've never been the type to be a princess who falls in love and shares a kiss.

"So I gave my first onscreen kiss and bed scene to Pierre, and it wasn't just any bed scene."

Read Also
Who is 'goddess' Paige Chua? 10 facts to know about the beloved actress 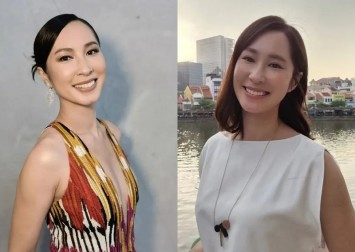 She continued, conventional bed scenes would see the man taking the lead, but in their case, it was Mei Guang.

"Pierre really suffered a lot," Kym added. "But everything felt very unique and exciting — so be sure to watch it!"

After the conference, Pierre, 48, showed AsiaOne a video clip of the humorous buildup to the intimate scene. Safe to say, Mei Guang is an aggressive and driven woman.

When Duty Calls 2 is the sequel to the 2017 military drama of the same name and shows the developments in the careers and relationships of soldiers played by Desmond Tan, Paige Chua, Felicia Chin, Tyler Ten, Edwin Goh, Nick Teo, Benjamin Tan and Joel Choo.

When Duty Calls 2 premieres on Channel 8 on Aug 15 at 9pm and it will also be available on demand for free on meWATCH.