Li Nanxing wore his clothes from The Unbeatables, went to a casino with $200k and lost badly

It's public knowledge that local veteran actor Li Nanxing was once saddled with more than $2 million in debts and he turned to a life of gambling which, unfortunately, didn't pay off.

On the new Channel 8 talk show The Inner Circle, he told host Guo Liang that he once wore his clothes from his hit TV drama The Unbeatables to a casino in Genting Highlands and was recognised.

It was initially a lighthearted conversation as Nanxing shared that he would practise the card tricks that he was taught for the role. But when Guo Liang asked whether the 56-year-old became a more "stylish player" at casinos after that, Nanxing chuckled and turned somber as he opened up about his addiction.

He said: "For a time after that, I was really hooked on it, to be honest... I had wound up my business and was looking for a shortcut. I thought, how long would it take for me to settle my debts just with acting? And I happened to be shooting The Unbeatables 2.

"If you're lucky, it's like the show depicts — you're winning hundreds of thousands just like that. In a few games, you can get the money back."

Nanxing managed to raise $200,00 and went to the nearest casino, which was in Genting Highlands at that time, and even "dressed in clothes from the show".

"When I got there, I was recognised. [People said] 'Look, he is Singapore's King of Gambling. Let's follow him.' When the casino security saw me, it was like I was some big shot, a VVIP (Very Very Important Person), and they really escorted me into the casino," he shared.

But, Lady Luck was not on his side and Nanxing grimly confessed that he "utterly lost". He didn't clarify if he lost his entire capital of $200,000 but he said that experience was "a lesson" for him. 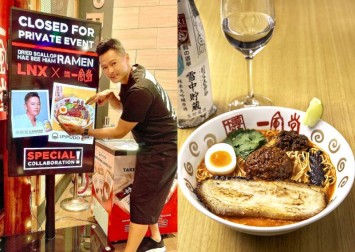 In the end, he turned to behind-the-scenes work to raise the funds needed to pay off his debts. He even worked as an extra on set.

Nanxing recalled: "It was for a Hollywood movie. I only had two scenes. I opened the door, asked, 'Who are you looking for?', [someone replied] 'Don't ask', and my character was shot and died.

"I even went for auditions. After I submitted my name, they were startled. They were like, 'Him? He's auditioning for this?'"

As much as it might have been a blow to his ego, Nanxing said matter-of-factly that he had no choice because he needed the money.

Eventually, he managed to settle his debts and even got a second chance to return to acting.

He said: "Viewers had stayed loyal and still wanted to see me in dramas. I really mustered my courage and returned to acting. It took around four years to settle all my debts."