This is Linying, the voice behind the NDP 2021 song

The NDP 2021 song, titled The Road Ahead, features the vocals of Linying, Sezairi Sezali, Shye and Shabir.

Featuring hyper-relevant, introspective lyrics and a rousing, uplifting tune that lingers long after you’ve heard it (in a good way), The Road Ahead was composed by Linying and music producer Evan Low.

Linying may be relatively new to the scene, but the 27-year-old singer-songwriter has racked up an impressive resume.

For starters, Linying was the first Singaporean female artist to sign a multi-rights deal with Universal Music Singapore in 2016, joining the likes of Charlie Lim and Gentle Bones (she has recently moved to Sony Music Singapore).

Her 2015 debut single, Sticky Leaves, has amassed millions of plays on Spotify and made the Global Viral 50 chart as well. Linying has also worked with industry names such as Felix Jaehn and KRONO and had her vocals praised by Troye Sivan.

Now, this is one rising star we’re keeping on eyes on. Read on to find out more about Linying – her life, music career, and thoughts about being a creative in Singapore.

When and how did you get started with singing and songwriting? Is this something you have always wanted to do

I’ve played the piano for as long as I can remember. As a kid, I always thought I’d grow up to be a pianist or a painter.

I’d play my own made-up piano pieces when I was little, and write poems about my pets and friends, but I didn’t start singing until I was a teenager.

It was only a few years later that I sort of put all these things together and fell into being a singer and songwriter, so no, it wasn’t something I’d always wanted to do. It just felt like the natural thing to do, maybe.

ALSO READ: This year's NDP theme song is out: The Road Ahead to be performed by 4 singer-songwriters

I studied history at university and really loved it. I’d record my own music and do radio shows here and there after school, but in my final year, the first song I released went viral on Spotify’s global charts.

Then, I was asked to go on tour in Europe with Felix Jaehn, a producer I’d collaborated with online, and things just took off from there. I actually forgot to file for graduation and only got to do it a year later, ha!

If you weren’t a singer-songwriter, what would you be?

An art historian. It’s what I would have continued doing in school if I didn’t have music. I just love looking at art, and I love how all art is a window into the time and place in which it was created.

What are your hobbies?

I picked up tart-making over circuit breaker, but I also really like reading and painting. I’m intense about food, so a lot of my free time is also spent thinking about what I want to eat.

What motivates you as a singer-songwriter?

I just think writing and singing is an integral part of my existence (currently). So I live my life and do those things. That combination is very personally fulfilling.

How would you describe your music style?

I flit through genres often, but I guess my music is always really emotional. Maybe that’s my special sauce, I don’t know, constantly being in the feels?

Who are your biggest musical inspirations?

Some of my biggest musical inspirations are Bon Iver, Kenny Rogers, The Carpenters, Lorde, and Simon and Garfunkel.

If you could collab with another artiste, who would it be?

I’d love to make an album with Dolly Parton, Joni Mitchell and Jack Antonoff. That would be wild.

What's a lesser-known fact about the music industry?

All music people have a thing for either coffee, whiskey or cats. I don’t make the rules.

What are some of the challenges with being a musician/artist in Singapore?

It’s not the most inspiring environment to be in because music isn’t a big part of our culture. That’s what I find most difficult about working here.

Have you faced criticism for pursuing a creative career, especially with cultural norms favouring Stem roles?

Most people are entertained, more than anything… I have never been outrightly criticised for pursuing music, but I do think it amuses people sometimes.

Read Also
NDP2021 theme song The Road Ahead is like great rojak: Refreshing and moreish 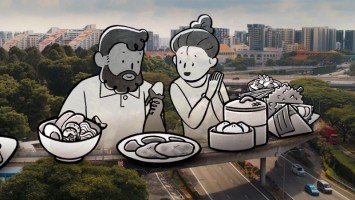 I don’t think the norm is confined to Stem (short for science, technology, engineering and mathematics) either.

I suppose any career that’s lucrative is perceived as desirable here, and understandably so.

We’re among a generation of people who lived under thatched roofs not too long ago, and that kind of survival-driven mindset was what it took to attain such drastic economic growth.

Norms take time to change. To be given the opportunity to pursue fulfilment instead of simply survival is such a privilege, and I’d be silly not to take it, you know?

What are your proudest achievements so far?

Writing Daylight Blows Into One Door with a musical hero of mine, Chris Walla from Death Cab For Cutie, and having Sticky Leaves play on Terrace House, a trashy Japanese Netflix reality show that I love. My two worlds really collided there.

How did the NDP song opportunity come about?

I was very kindly asked to be on board to write the song by my friend and producer Evan Low (@itsevanturetime), who has done production work on the NDP for a few years now.

It was pretty funny to think about, and it sounded like an interesting experience, so I was all for it.

I’m working on a new album right now – studio time is refuge from the crazy schedule I’ve been keeping. I’m really excited about it.

What advice would you give to aspiring musicians in Singapore?

The regret you’ll feel for never having given it a try is going to supersede whatever disappointment that may come from doing it, so you might as well just go for it.

Life is brief. Be reasonable, take well-considered risks that you’re comfortable with, and don’t sweat the small stuff.

ALSO READ: No NDP this weekend? Here's how you can celebrate Singapore's 56th birthday instead