Mark Lee and Catherine Ng have been married for 23 years.

For Mark Lee, the key to a long- lasting marriage is not placing too many demands on your spouse.

The local actor-host-director has three children - Calista, 13; Maksonn, 10; and Calynn, eight - with his wife of 23 years, Catherine Ng.

Lee, 53, says: "If your partner doesn't meet your high standards, then ultimately, you are the one who suffers. So don't give each other such pressure.

"Old married couples like to say, 'Oh, last time you were not like that', but the past is the past. People's mindsets change with age.

"After more than 20 years, there will be good and bad things you will discover about each other. The issue is whether you want to accept and get used to it.

Ms Ng, 49, who helps run Lee's various businesses and calls him a "loving and responsible" father, feels accommodating each other is necessary.

She says: "When I'm upset, I will tell myself he's working so hard for the family to give a good life to our children. He's tired and frustrated. I really have to put myself in his shoes.

"At the beginning of our marriage, I would fight back. Now, after having kids and getting older, I feel this is not the point anymore. So whenever we have disagreements, I will just keep quiet and walk away. After that, we treat it like nothing happened and behave normally.

"If we keep fighting over and over again, it will not only affect our relationship, but the whole family. I want the children to see their parents in a loving state and they will feel happy. We have to give them a nice and loving environment to grow up in."

Lee - who is starring in the Chinese New Year comedy film Reunion Dinner, which is showing in cinemas - feels that managing a marriage is even more difficult than managing a business or career because divorce is not an option.

He says: "You go and register a company. If you don't want to continue doing it, you close shop.

"You go and register your marriage. But you can't just say you don't want it anymore."

He adds that for those who get divorced, there may be more headaches. "How do you split the money, the house, the children?

"By the time everything is finalised, you'll be like 70 or 80, and exhausted. Why don't you use this time to settle your marital problems instead?

Even though Lee and Ms Ng acknowledge going through ups and downs when it comes to his finances and career, they are proud to have pulled through together.

However, their most daunting challenge to date is dealing with their youngest child Calynn's health condition .

She was diagnosed in 2018 with glomerulonephritis, which causes inflammation and damage to the kidneys. Even though she has stopped taking steroids, she is still on other medication.

She goes for check-ups every two months and her doctors do not have an answer on when or whether she will fully recover.

Ms Ng says: "Mark has become more emotional and sensitive, and this has brought us closer. We have to be a strong family to go through this together.

"We must let Calynn know we love her, and we both have to stand closer together and give her the best support."

This is why the couple take pains to strengthen their bond every chance they get.

For instance, whenever Lee goes overseas - whether it is for filming or to attend the Golden Horse Awards last year in Taipei, where he was nominated for Best Actor for the 2020 movie Number 1 - he will take Ms Ng along.

She says: "That's what he promised me before we got married. We need to have our own private life, away from the children."

He adds: "Calynn likes to sleep with us in our bedroom, so there are fewer opportunities at home."

Ever the comedian, he jokes: "Cannot lah, then I how? I still very strong one leh. My wife is Powerpuff Girl too."

With time, both admit public displays of affection have fallen by the wayside.

Lee says: "Last time I never kiss my wife, she gets angry. But now I never kiss her or forget to, she's okay."

But Calynn always reminds her parents to be loving and hold hands, even though their teenager Calista will cringe in embarrassment.

Ms Ng says their son Maksonn is "neutral", with Lee quipping: "Boys got handphone, can already."

However, the physical attraction is still there.

Ms Ng continues to be struck by Lee's "charm" on stage and admits she still gets jealous whenever he receives female attention as the boss of entertainment company King Kong Media Production.

She says: "With his status now, there are young girls who throw themselves at him. I will tell him off and constantly remind him to watch out for what these people are up to." 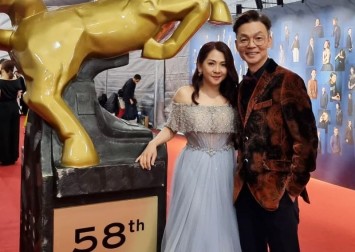 Lee counters: "Honestly, I have no interest in them because now, I have daughters. Older women won't take a fancy to me either.

"The flirting era has already passed. I'm focused on my career and working hard for the family - that is my target."

He cites the "many examples" of celebrity extramarital affairs that "we've already seen".

He says: "My biggest worry is - how will I go face my wife and children?

"If classmates tell my kids, 'Wah, your father has a girlfriend, your father doesn't love your mother anymore?', this does major harm to them.

"Ultimately, the one who will give you happiness may not be a girlfriend, but will definitely be your wife."

So does Lee get jealous about Ms Ng too? It will never come to that, he declares.

"Because I'm Ah Beng and they know she's my wife, nobody will dare to do anything. If suay suay who goes and tackles my wife, he will die until very ugly," he quips.