We've seen our fair share of local celebrities in advertisements — ahem, Michelle Chong, anyone? — but a new advertisement for digital locks starring veteran actor Richard Low might be the next talk of the town.

The 69-year-old, who is affectionately known as "limpeh" (a Hokkien word that translates to "your father" but used to refer to one's self), can be seen in the video opposite property agent-turned-video-star Rechard Tan.

For the uninitiated, Rechard got his 15 minutes of fame earlier this year when he reinvented property ads by creating spoofs of Mandopop songs, crooning about the features of the property and the neighbourhood. He won the hearts of netizens with his parody of Marry Me — the popular duet originally by David Tao and Jolin Tsai — and has also rewritten Jay Chou's Dao Xiang (Fragrant Rice).

Unsurprisingly, the advertisement starring Richard (and Rechard) is a parody of Show Lo's Jing Wu Men (Dance Gate) and the former plays a seemingly wealthy customer who comes to shop for a digital lock. Although, he's oddly overdressed for the occasion in a pimp-like getup. He wore a mandarin-collared suit and had gaudy accessories — a cane with a golden diamond-shaped head, and a long gold chain with a gold padlock.

As for Rechard, he plays a salesman from the shop.

While Rechard's portion of the rap consists of the key features of the product and what kind of locks are available, Richard also does his fair share of rapping although he is just saying buzzwords and calling for the public to buy their locks soon.

Oh, and of course, there are young girls dancing with Richard as well while he flaunts his swag and wealth. 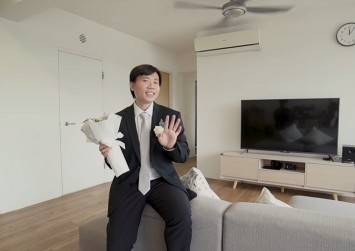 As much as the advertisement is kind of cringe (as the young ones would say), props have to be given for a rather unexpected pun on Richard's Chinese name in the lyrics. It goes like this:

For the non-Mandarin speakers, Richard's Chinese name sounds like the number 6,100 in Mandarin. Yes, it's a low-hanging fruit but we're not expecting much from the song, are we? This won't be winning a Golden Melody award anytime soon.

We are also impressed with how game Richard is for this video because it really looks and feels like he's having a lot of fun while filming it. The elderly actor also had a dance-off with Rechard where he got to yell his iconic catchphrase "You didn't eat arh?"

And of course, the video ends with Richard's character biting the head off the salesman because he was asked to use the word "limpeh" less. The actor has traditionally been cast in the bad-guy roles or characters who are fierce and hot-tempered.

"Limpeh say limpeh is limpeh's problem. You think you can control how many times limpeh say 'limpeh'?" he yells, before turning to the camera and asking viewers to support the shop.