The multitalented star held a media appearance on May 8 promoting his brand, Chef Nic.

Hong Kong singer, actor and, these days, chef Nicholas Tse regularly dons the apron to cook for his loved ones.

Is long-time girlfriend Faye Wong among the fortunate ones to taste his dishes?

"Of course!" the superstar replied, according to Taiwanese reports, at a recent media appearance on May 8 to promote the opening of his new shop Chef Nic.

However, the self-taught chef remained tight-lipped when asked if Faye had any comments about his skills.

Read Also
'Hollywood of the East': The rise and fall of Hong Kong showbiz 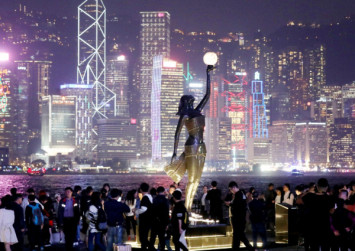 Nicholas also shared snippets about his childhood and how food helped to repair relations with his famous parents -- celebs Patrick Tse and Deborah Lee.

The actor did not have a good relationship with them growing up but managed to become closer to them seven or eight years ago.

Rolling and pulling 17-metre-long longevity noodles, Nicholas revealed that he would use food to initiate conversations.

"Dad, would you like to try this?" and "Mom, how do you make this dish?" were some of the questions he used to get the ball rolling.

During the event the 38-year-old made sure to emphasise that his new product, Chef Nic's Noodles, is made from all-natural ingredients, after his previous brand of cookies were found to contain traces of cancer-causing compounds.

For fans of his wildly-popular reality cooking show, Nicholas also revealed that each season costs a whopping 300 million yuan (S$60 million) to produce, with the high production costs attributed to the filming in multiple foreign locations.

Wondering what the multi-talented star is working on? He's currently filming a new movie, Raging Fire, and working towards releasing an EP in October.

We're impressed he even finds the time to cook!