'No money can buy that kind of experience': Paige Chua sailed with Singapore navy for role in new drama

The seas may hold hidden loot, but for this actress the real treasure comes in the form of a priceless experience she had.

In a recent interview with AsiaOne, Paige Chua shared with us her experience sailing onboard the Republic of Singapore Navy's (RSN) RSS Endeavour — an opportunity that was afforded to her for the drama series When Duty Calls 2.

"It was a very enriching experience for me as a person because sailing with the RSN is probably a once-in-a-lifetime experience," the 41-year-old actress said. "No money can buy that kind of experience."

Paige also uploaded to Instagram a video of her three-day-two-night stay on the RSS Endeavour, giving details about her life onboard the ship.

Paige wasn't the only non-military personnel on the ship — she needed to shoot multiple scenes on the RSS Endeavour so a film crew was on the journey with her.

She said there are some scenes of the ship departing from the berth and another where a helicopter landed on the ship. These two main scenes warranted the three-day stay "by providence", she added.

Read Also
'Could this be counted as reservist?' Edwin Goh had more gruelling military experience acting in When Duty Calls 2 than his NS 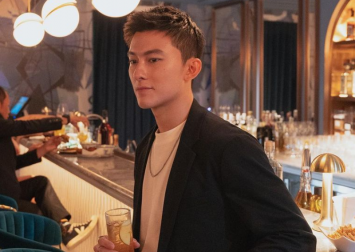 Shooting was completed by the second day.

"The weather was very kind to us as well so I had time to connect with my colleagues — people I don't have time to talk to when we are on a regular drama series, like cameramen — and at night the very kind CO of the ship let us have a few hours on the flight deck," Paige added.

"So we reconnected under the starry, starry night. It's been quite romantic as well, I would say! It was very fun."

She also said: "I felt very privileged to be sailing with them and seeing how the men and women in RSN conduct their exercises — it was a very cool experience. And the food! Definitely, I have to mention that it's no rumour that the food onboard is good!"

Apart from gushing over the nosh, Paige also explained that she was treated in true LTC fashion.

"I play a Lieutenant Colonel right? So I have a cabin to myself and a toilet in the inner room as well! … It wasn't huge, but it was very comfortable."

The only worry Paige had, she shared, was hitting her head on the top bunk of her double-decker bed after being woken up by the ship-wide alarm that goes off at around 6.30am every morning.

Because of Covid-19 restrictions, Paige said she wasn't able to talk to the crew of the RSS Endeavour during her free time. She did, however, speak to the CO and watch the crew at work.

Paige recounted: "I also watched the flag-raising ceremony when we were about to dock — I wanted to take a video but my phone was in camera mode, so I took a picture instead."

Watching the ceremony happen in the ocean felt different for Paige.

"I felt very patriotic — that's why I really wanted to capture the moment. I mean, you're Singaporean, you see the flag, you're on [the RSS Endeavour] — I feel like it's a really proud moment," she explained.

"I was in uniform, and although I'm not a soldier and I've never done NS (National Service) before, I just felt like I was very grateful for being in a country that's so secure and safe."

The flag that Paige saw is known as an ensign, which is a specific flag raised when a ship is returning to base, the public relations manager of the Singapore navy clarified to us.

A 'Paige' out of an adventure book

Paige also expressed a willingness to go back to the RSS Endeavour for a maximum of two to three weeks.

"Actually I feel like we should sail and maybe dock somewhere, because I've heard stories of them (the crew of RSS Endeavour) docking in Australia — it's like a cruise where you go somewhere and then stay on land for a couple of days before you go back," Paige enthused.

When informed that a typical journey to Australia would take a week, Paige said: "A week is fine! We can stay on shore for about three days and two nights! It's a bit like a Royal Carribean cruise trip — we can have our KTV onboard!"

When Duty Calls 2, featuring local actors like Pierre Png, Felicia Chin, Edwin Goh, Kym Ng and Chen Shucheng, is available on demand for free on meWATCH and on Channel 8 on weekdays at 9pm.

ALSO READ: 'I've never cried so much for a show before': Desmond Tan and Paige Chua on emotional scenes in When Duty Calls 2