'Parenting isn't just dealing with your children': Qi Yuwu on protecting his kids in a changing world

Qi Yuwu, a father of two, shares his perspective on parenting and keeping the kids safe.

Raising children is hard enough as it is, but this actor knows he must go beyond just caring for them.

In a recent interview with AsiaOne for his new Mediacorp drama Dark Angel, Qi Yuwu explained his perspective on parenting amid the changing times.

"I have a responsibility to protect my children from the constantly developing dangers in this world," the 45-year-old said.

The veteran actor is married to local actress Joanne Peh and they have a daughter, six, and a son who's four.

Sharing more on his parenting perspectives, Yuwu said: "Society is in flux between different eras. When I look at society now and compare it to when I was a child, the world is completely different.

"But I believe that even during my father's time, he also felt that society had changed. So I think the truth is that the world keeps moving forward — but human beings also have an amazing ability to deal with this: Adaptability."

Citing how we've dealt with Covid-19, Yuwu explained that even though the pandemic isn't completely resolved, we are still able to live our lives while fighting the virus.

The same can be said when it comes to understanding children and their goals in life, but it's not as simple as just adapting to situations and overcoming them.

Read Also
'Let time prove everything': Joanne Peh on rumours that her relationship with Qi Yuwu was fake 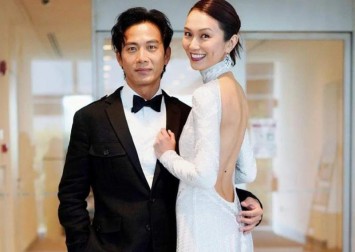 Said Yuwu: "When it comes down to cultural issues, I can try to comprehend them. But as someone who has already experienced life to some extent, it's not easy to set aside what we've already learned and accept what is considered modern and mainstream.

"I can only say that I hope to understand my children. Honestly speaking, however, the hardest conundrums will arise when I am able to understand them but cannot accept their reasoning. That would be the challenge of parenting."

In Dark Angel, Yuwu plays Zhu Wei, a mysterious lawyer who works alongside He Ziyuan (Zoe Tay) as she attempts to find out who is responsible for the attack on her family that left her husband and son dead and her daughter in a coma.

This isn't Yuwu's first rodeo when it comes to taking on courtroom drama. In 2010, he played a lawyer in the Mediacorp drama The Family Court and again in the 2019 drama Day Break. In the latter, he was born and raised amid gangsterism and brought his street-smarts to the court of law.

On his role In Dark Angel, he said: "He is very unique and enigmatic and his backstory is one that will surprise those who learn about it."

And vice versa, Zhu Wei was also surprised when Ziyuan found out about his secret.

He recalled a memorable scene from the drama: "Right in front of me, she revealed a secret that I had been hiding for a long time. She told me that I've been putting on a front all along — this was all during a point in time where the two of us had lowered our guards."

The NC16 version of Dark Angel is available on meWATCH, while the cleaned version airs on Channel 8 on weekdays at 9pm.

ALSO READ: 'It's no issue': Aileen Tan admits to editing her photos for social media