While his wife local actress Joanne Peh is settling personal matters in Guangzhou with their two young children, Qi Yuwu returned to Singapore safely on Jan 29 and will quarantine himself for 14 days.

The Chinese city is the actor's hometown, and both of them and their children were there since before Chinese New Year to celebrate with his parents.

The actor told AsiaOne that he was there for a total of nine days. The situation wasn't that serious when he departed for Guangzhou, and it was only around the third day of the trip that things took a turn for the worse.

This is the first time he's ever been quarantined, however, he is voluntarily imposing it on himself.

Yuwu, 43, added that because of his self-imposed quarantine, his filming commitments have been postponed accordingly, and he feels bad that the production team has to reschedule and incur additional costs. However, he is aware that such measures are in place to ensure the safety of the people in Singapore.

He added that Guangzhou wasn't feeling particular festive and celebratory over the Chinese New Year period because the streets were devoid of people and vehicles. However, he was very touched at how medical personnel made sacrifices to fight on the frontlines, and how the Chinese listened to the government's advice to stay indoors.

"What I saw in China was a lot of medical personnel courageously putting their lives on the line to fight despite not having a full understanding of the virus. They upheld their responsibilities and cancelled their long leave. Some even travelled to Wuhan to help in the situation there, and persevered despite the lack of facilities and resources. It's an admirable spirit," Yuwu said.

He hopes that Singaporeans can be more mindful when it comes to the precautionary measures such as wearing masks, washing hands, and avoiding crowded areas.

He said: "When everyone is united, we can tide over this difficult time. Now that it (Wuhan virus) is a global matter, everyone is involved. Ultimately, I believe we can overcome this obstacle." 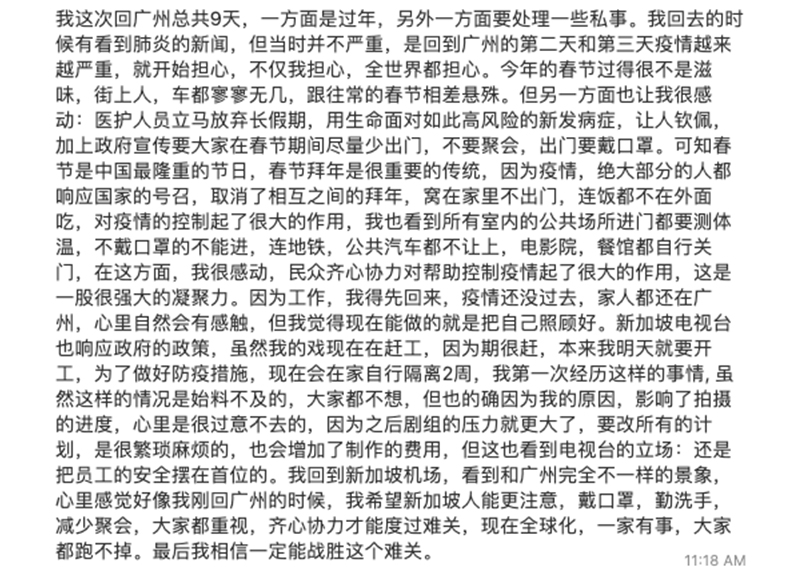 Doreen Neo, the chief content officer of Mediacorp, said that the "health and well-being of our partners, cast and crew are of utmost priority" and "strict working SOPs that are aligned with official advisories from governmental bodies like the Ministry of Health and Ministry of Manpower" have been implemented.

"Filming for our productions is ongoing, and we will continue to exercise vigilance as the situation evolves," she added.

ALSO READ: Joanne Peh in Guangzhou: No kid-sized masks, stitching up adult ones to fit my kids