Singer Annie Yi, 52, bites back after being bullied for being 'old'

No wonder Taiwanese singer-actress Annie Yi didn't hold back when a netizen came after her for being 52.

Annie's birthday was on March 4, and she went on Weibo to celebrate it by writing: "I'm 52, I'm still an old girl, I'm living the most exciting life I've had and I'm having the most brilliant smile." However, it was reported that a commenter shamed her for celebrating her age and replied: "If you're old, don't try to act young."

In response, Annie chided the netizen: "I feel sad for you. Did your mother not raise you right? I hope you learn some manners soon and learn to respect women."

In a phone interview with Shin Min Daily News on March 6, Annie encouraged women not to feel ashamed of their age, adding that she felt the commenter was bullying women. She also wanted to let women know that they should not be held captive to such ageist mindsets.

Annie pointed out that female celebrities are often evaluated by the public on three points. Firstly, that they've become old and ugly.

"Why must people treat women like that? That is essentially bullying women. I'm 52 and I've seen things, so don't try to bully me just because I'm a female celebrity," Annie explained.

YOU CAN'T SCOLD MY KIDS

Annie isn't a stranger to critiques from netizens but she draws the line when they scold her kids, she told Shin Min.

Read Also
Joey Wong, 52, stuns fans with Instagram photos where she looks half her age 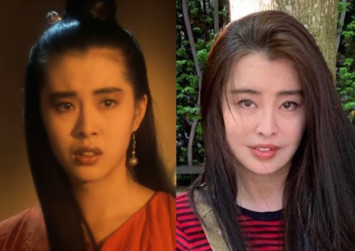 The mother of two, who has son Harrison from her previous marriage to Taiwanese singer-host Harlem Yu, expressed joy that the 17-year-old got a place at Central Saint Martins art school in London, and right now, she wants to spend more time with him in Taiwan.

Her marriage to Harlem ended in 2009, and Annie found love again with Chinese actor Qin Hao, who is 10 years her junior. The pair got hitched in 2015 and have a three-year-old daughter Milly. On jet-setting between Taiwan and China, Annie admitted that the coronavirus has thrown a wrench in it.

She said: "No matter which way I'm flying from, I always have to quarantine myself when I arrive so it's better not to travel anywhere now. I also have to prioritise my son first during this time and stay in Taiwan more."

"I have priorities in my life. Since I have a child, I have to be responsible for her. To the public, it seems like I've left showbiz, but I did not. Now that my daughter is going to preschool, my time is freed up," she added.