Singaporean singer, songwriter, record producer and actor Lim Junjie (JJ Lin) has purchased three pieces of virtual land in Decentraland, a marketplace in the cryptocurrency sphere where virtual real estate is bought, sold, and users can log in and hang out in a "metaverse".

The 40-year-old international superstar, who is primarily based in Taiwan but calls Singapore home, currently holds three Decentraland virtual plots of land: Prime Gallery 1, Primary Gallery 2 and NEAREST to GENESIS PLAZA. The three plots were purchased on the OpenSea non-fungible token (NFT) marketplace, for 6000 MANA each (Decentraland's cryptocurrency), or roughly USD30k (S$41k) apiece based on current prices (about USD5 per MANA).

Based on OpenSea's transaction records, two of the three plots (Prime Galleries 1 and 2) were purchased by an OpenSea account owner named Dan309 about a month ago before being transferred to (presumably) JJ Lin's OpenSea account - username Meta_Enigma - five days ago. For NEAREST to GENESIS PLAZA, records show that Meta_Enigma purchased it directly from user DCF753.

As each pixel on Decentraland's site plan is 52.5 square feet, Lin's paid roughly S$780.95 per sq ft of Decentraland real estate. That's around the psf price of a 4-room HDB in Geylang Serai or a 4-bed corner terrace in Loyang Villas.

Since JJ Lin tweeted about his purchase on Nov 23, it's been shared 389 times with 441 comments.

from apes to punks to metaverse land… who’s with me?#metaverse #nft pic.twitter.com/1ucyJkxU6B

While most users buy NFTs and virtual lands for speculative reasons, others do so because of an affinity to what these virtual environments entail. Some buy them to build their own virtual houses, self-brand or display their NFT collection for users to visit and admire.

One reason for this resurgence in interest, or hype, is due to Facebook's recent rebranding to Meta and its plans to develop a version of its own metaverse.

For most of us experienced in the real real estate sector, we're probably baulking at the prices Lin's paid for these "non-existent" lands. However, Lin is no stranger to the idea of buying NFTs, or virtual assets, such as digitised 3D paintings, memes or avatars on the blockchain.

Two reasons why some NFTs are highly prized (some say over-valued) is because they're immutable on the blockchain (ie. they cannot be altered or removed) and rare (eg. there are only 10,000 CryptoPunks in circulation).

Of course, Lin is also a savvy property buyer in the real world, having splurged $18.9m on two luxurious high-rise apartments in Taipei, Taiwan in August 2021.

In roughly the same period when Lin made his recent purchases, another Decentraland plot was sold for USD2.4 million - setting the record for the most expensive virtual real estate ever bought in the metaverse (so far).

That sale, which was on the "Fashion Street" area of Decentraland's map, was bought by Metaverse Group, a subsidiary of public-listed Tokens.com, for 618,000 MANA - the equivalence of USD2,428,740 at the time.

That plot of land is made of 116 smaller parcels, measuring 52.5 square feet each, which forms 6,090 virtual square feet in size. That translates to about USD400 per square foot (S$548 psf). The Metaverse Group intends to collaborate with Decentraland to develop the estate for fashion shows and commerce.

Not to be outdone, another digital land plot was sold for 550 ETH, or USD2,339,700, on the Axie Infinity play-to-earn virtual environment just yesterday (Nov 25). The seller had been holding onto that plot since January 22, 2019.

While speculation on anything cryptocurrency-, NFT, or virtual real estate-related is a volatile and high-risk endeavour (ie. the cautionary tale is that the value of these virtual assets can sink down to zero overnight), what's notable is that more celebrities, sports teams and brands have been jumping on the NFT and virtual real estate bandwagon of late (and publicly sharing their purchases).

From TV talk show host Jimmy Fallon, Snoop Dogg, to even brands like Smurfs, South China Morning Post and ATARI have invested in virtual real estate in platforms like The Sandbox (SAND/LAND) and Decentraland (MANA).

No one can really predict or forecast how these virtual platforms, let alone their environments, assets and technologies will evolve over time. The general rule is to do your own research (DYOR) and not to take any publicity of these services as a form of investment advice. 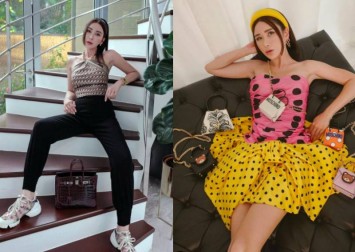 Anyone who's invested in real-world properties will tell you this - what you can't see and touch, can collapse like a house of cards overnight. Speculators will tell you to invest only with what you can afford to lose - the same way you see hopeful punters queueing up at TOTO and 4D booths every week.

It's the opposite perspective for most millennials and Gen-Zs, who generally form the bulk of these virtual real estate buyers and sellers. Most of them can ill-afford to own a luxurious beachfront property or stake estate land like their forefathers. So, for them, being early or the first to claim ownership of these virtual real estate lands (in pixelated form) is likened to a virtual gold rush.

Most are just there to build their virtual worlds to share with followers. Some intend to resell for profit. But there could be a sizeable group who are hopeful that these lands will persist indefinitely so that they can pass on their worth to the next generation, just as our great, great grandfathers did with our pre-war bungalows and land.