LOS ANGELES - Two women who say they are in a relationship with R. Kelly defended the R&B singer, despite criminal allegations he sexually assaulted teenage girls, and in a tearful interview broadcast on Thursday (March 7) accused their own parents of trying to extort money from the performer.

The parents of the two women, Azriel Clary and Joycelyn Savage say their daughters, 21 and 23 respectively, have been brainwashed by Kelly, 52.

"I'm crying because you guys don't know the truth," Clary said as she sobbed during the interview with CBS.

Clary called her father "very manipulative," and accused her parents of telling "lies for money".

"If you can't see that, you're ignorant and you're stupid,"she said.

Kelly, who was in the room during the women's interview, pleaded not guilty last month to charges that he sexually assaulted three teenage girls and a fourth woman.

He has denied similar abuse allegations for decades. He was tried on child pornography charges in 2008 and found not guilty.

The new charges were brought after a Lifetime television documentary series featured interviews with seven women, including his former wife, Andrea Kelly, who accused him of emotional and sexual abuse.

Clary said her parents encouraged her to make "sexual videos" with Kelly when she was 17 so they could blackmail him. She also said her parents had threatened to leak naked photos of her unless Kelly sent them tens of thousands of dollars.

Both sets of parents have denied ever asking for money or receiving money from Kelly.

"We never 'sold' our daughter to him or anyone else... All of the victims and parents cannot be lying," Alice and Angelo Clary said in a statement on Wednesday.

Read Also
R. Kelly back in custody for failing to pay child support 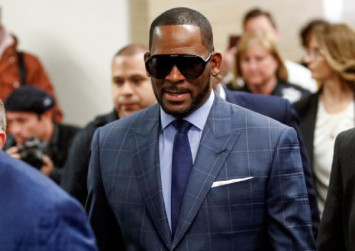 Kelly was arrested in Chicago on Wednesday for owing more than US$161,000 (S$218,000) in child support to his three children with Kelly. He must pay the full amount to get out of jail, a spokesman for the Cook County Sheriff's Office said.

Kelly told CBS he has been in financial difficulties because "so many people" who had access to his bank account have stolen from him.

"How can I pay child support if my ex-wife is destroying my name and I can't work? How can I get paid?" he said, crying and at times appearing to become hysterical during the interview.

Andrea Kelly's attorney declined to comment on the allegation.

The singer's next child support hearing is set for March 13 and his next court date on the sex abuse charges is scheduled for March 22.