The sports anime genre has certainly picked up steam over the years, but few can claim to be as iconic as legendary basketball series Slam Dunk.

Back in its heyday, the manga-turned-anime sparked a basketball fever across the whole of Japan, popularising the sport and inspiring many to shoot hoops in a country rooted in baseball culture.

It has since grown into a beloved, fan favourite title, but the long absence does bring up some nostalgia every now and then.

With a brand new anime movie lined up for 2022, the wait for new content is soon to be over.

The project, which is tentatively titled Slam Dunk, was first announced early this year by the way of series creator Takehiko Inoue, who will serve as both director and scriptwriter. 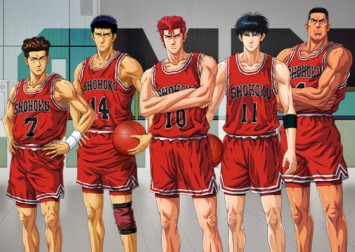 Now, it has ushered in its first-ever teaser, revealing the names of the development team to the drum beats that mimic the dribbling thumps of the basketball.

The 30-second reel doesn't give much information away, but we do know that the film is on track for a Fall 2022 release, with more details expected to be on the horizon – hopefully sooner than later.

The timing of this trailer drop is pretty fitting, too, considering the impressive silver-medal performance by Japan's women basketball team at the recent Tokyo Olympics.

Here's a quick refresher on Slam Dunk, courtesy of the description on Crunchyroll, which will be streaming the upcoming movie:

"Hanamichi Sakuragi, an entering freshman at Shohoku High, holds a record for being rejected by 50 girls during middle school. Ever since the last girl turned him down for a guy on the basketball team, Sakuragi's been traumatized by the sport.

One day, an unsuspecting Sakuragi is approached by a cute girl who asks him, 'do you like basketball?'

Sakuragi immediately falls head over heels for this girl, Haruko, and answers 'I love it!'

Dreaming of the day he can capture Haruko's heart, Sakuragi, who doesn't know a dribble from a dunk, begins his training. But Haruko had her sights set on another freshman, Kaede Rukawa, the superstar rookie.