Rumours have been flying about their reel-to-real romance since their movie Man In Love was released in April this year, but it had always remained just gossip.

However, today (Dec 10), Taiwanese stars Tiffany Hsu and Roy Chiu finally admitted they are a couple — by announcing their marriage.

Both released the same photo and text caption on their respective social media accounts: "I've said before that I would share good news with everyone when it happens. The good news is, we're married."

They added a hashtag thanking everyone for their concern.

Roy and Tiffany's celebrity friends and followers have left tons of well-wishes on their posts. Actress Cheryl Yang said: "I'm so happy… I wish Mr and Mrs Chiu happiness forever."

According to United Daily News, the couple registered their marriage on Dec 7 and their witness was veteran TV host Pauline Lan.

Tiffany, 37, and Roy, 40, showed such great chemistry in the hit movie Man In Love — a remake of the 2014 South Korean film of the same name — that some believed they were in a budding romance. In the movie, he played a debt collector and she a debt-ridden woman who stole his heart. 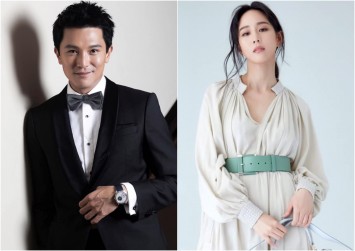 Certain similarities in their social media posts added to the rumours.

This is believed to be Tiffany's second marriage. In April, Taiwanese media reported she was married to cinematographer Liu Younian but their marriage ended after two years in late 2020. However, she never confirmed if she and Liu actually got hitched.

Meanwhile, Roy has been linked to several female celebrities, including Taiwanese singer-actress Rainie Yang. The two got together after acting in the 2003 drama The Original Scent of Summer but their relationship ended on a bad note.

Rainie previously told media that she once dated a male celebrity and she met him less than 10 times in eight months. When she sent him a message to break up, he only replied half a month later. Though she didn't name the man, it was believed to be Roy.

Ironically, Rainie and Tiffany are BFFs.