Kim Go-eun (in pink dress) with the crew of Little Women during the filming at Robinson Road, Singapore, on July 3, 2022.

All we knew was that the crew of the upcoming K-drama Little Women would be filming at Robinson Road today (July 3) between 7am and 4pm. The entire stretch, as well as a few side roads, was even closed for the event.

Would the cast Kim Go-eun, Wi Ha-jun and Uhm Ji-won be present as well? We weren't sure. But AsiaOne's entertainment reporters — as well as the 50-plus fans present — were keeping fingers crossed, hopes high and eyes peeled for some distant stars.

At 8am, we saw around 15 vehicles driving in tandem along Robinson Road in rehearsal, as well as a banged-up open-top container truck parked at the closed McCallum Street.

Close to two hours later, we spotted a petite woman wearing the same dress as the one Go-eun was seen in yesterday, but it turned out to be her stunt double. A crew member told us the celebrities would not be participating in this shoot.

Reluctant to leave — because how often do we get K-dramas in production here — we hung around Oxley Tower for another three hours and saw the highlight of today's shoot.

No spoilers; all we'll say is that there was a loud bang and yours truly might even have made her first calefare appearance in a K-drama.

And finally, at close to 3pm, Go-eun — who just turned 31 on July 2 — appeared before us with a small entourage. She got briefed by the crew, changed her shoes and jumped promptly into the action.

Again, no spoilers: we aren't saying what her exact scenes are. 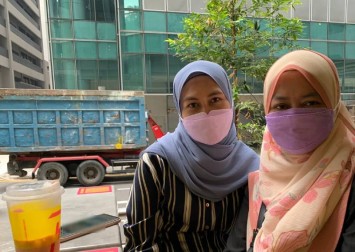 But 30 minutes later — seven hours since we began our hunt — the willowy star completed her scenes and was escorted off the set by her people.

The crew of Little Women arrived in Singapore on June 29 and will reportedly be here for two weeks, though it is not certain when the Korean stars will return.

Go-eun and Ha-jun were also spotted filming in a seafront condominium here. Thankfully, we won't have to wait too long to catch Little Women; the series is tentatively scheduled to premiere next month on Netflix.