Woman runs into Jackson Wang at Singapore gym: ‘I regret not wearing contact lenses and drawing my eyebrows’

A woman posted her experience running into Jackson Wang at a gym in Singapore.

Many of us won’t bother to doll up when we go to the gym, but a woman with the username of MaoVV in Xiaohongshu wishes she did when she ran into Jackson Wang in Singapore.

In a post on Monday (Aug 8), she said she had wanted to wait until Jackson had left Singapore before sharing her post. But she changed her mind after noticing the star from K-pop boy band Got7 had already done a livestream.

In her post, MaoVV said she was initially unsure if it was really him but became certain “only after hearing the person next to him call him Jackson.”

She waited for him to finish jogging before asking him for photos.

“He took my handphone, switched on the camera function and took a lot of photos with me. He also chatted with me and was really friendly,” she wrote.

“He was jogging before I entered the gym and was still working out when I left. There is a reason he is in such good shape. Oh yeah, he also said bye bye to me!”

Many users came to Jackson’s defence, stating he still looked handsome to them.

“Why are some comments so harsh? Singapore has high humidity and he has been filming every day the last few days. He was busy until late at night; he’s only bloated,” one comment said.

“I find anyone coming to Singapore gets bloated,” another user commented, with others saying the food is “too heavy”.

Some called for some empathy, citing Jackson’s packed schedule. 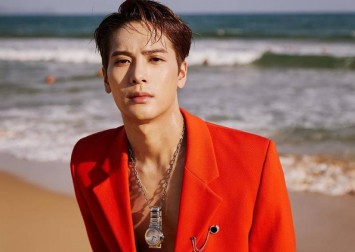 Jackson indeed was very busy in Singapore. He opened a pop-up concept space for his clothing label Team Wang Design at the hotel Voco Orchard on Aug 4, which will run until the end of August.

He also hosted the Team Wang Records (Human Remix) event at the Marquee nightclub on Aug 6, which saw scalpers try and sell the tickets at over six times the original price and fans start queuing at 4am.

In an Aug 10 interview with Zaobao, Jackson discussed his weight issues as well, admitting it was a "struggle" for him to restrain himself from eating too much in Singapore.

"It's a constant struggle… when the food is delicious and I really want to eat it," he said. "But I know as soon as I finish it, the 'demon' in the mirror will appear."