McDonald's teases comeback of the Nasi Lemak burger, but fans say thank you, next

Is the Nasi Lemak burger really coming back?

Remember when McDonald's launched the Nasi Lemak burger circa 2017?

You probably did -- the unconventional item was the talking point of the year.

Online media outlets rushed to give their opinions, the crowds flocked to get a taste and eateries came up with their creative takes on the humble Malay dish.

In fact, if you recall, the burger was so popular that it was prematurely sold-out after a two-week run. 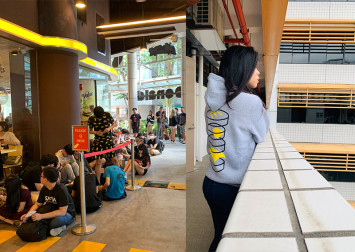 This popularity might have inspired the folks at McDees to bring it back, especially since the recent McGriddles relaunch was well-received.

On April 19, McDonald's uploaded a post with the words "Why didn't you" on Facebook and Instagram, with an accompanying caption that reads "Missed out on the sold out sensation back in 2017? #dontmissoutagain".

Missed out on the sold out sensation back in 2017? #dontmissoutagain

Down in the comments section however, commenters are calling for other burgers and favourites to make a comeback instead.

Some even rallied for the Kiasu burger to make a return -- even though most millennials have probably never heard of it.

In case you've never heard of it as well, we understand -- the Kiasu burger was launched back in 1993.

Essentially a long bun version of the McChicken, it was made popular by a commercial featuring local comic book character "Mr Kiasu".

Over on Instagram, it's a similar story, with many beseeching McDonald's to change their minds.

Some comments were slightly more positive though, with people excited that the burger might make a return just in time for Hari Raya Puasa in the first week of June.

Will the Nasi Lemak burger still prove popular when if it makes an eventual comeback? Only time will tell.