5 boutique pastry shops to sink your teeth into

A biscuit crust with soft custard and fresh fruits, tarts are a great option if you're looking for something less sweet to end the meal with. We round up five small businesses that do impeccable versions of these golden-brown crusted goodies.

Wunderfolks started as a home-based business after the circuit breaker in 2020. It began as a two men team: Vincent Tay, who is in charge of the kitchen and baking, and Dale Thia who handles the marketing and sales aspects of the business.

They have since opened a takeaway tart and pastry at a charming shophouse at 201 Joo Chiat Road.

Prior to launching Wunderfolks, Vincent learnt the ropes at At-Sunrice culinary school, and would occasionally bake for friends and family as well as during festive seasons like Chinese New Year and Christmas.

As the tarts are handmade from scratch, they have a home-spun, crumbly texture and buttery flavour. Vincent's 'tart sucre' recipe leans towards the French style of sweet tart crust. To ensure freshness, the tarts are freshly assembled just before delivery.

Best-sellers include the Mixed Fruit Tart, filled with creme patissiere and festooned with peach slices, grapes, strawberries and blueberries, and finished with a light mirror glaze.

The tarts, which come in 8cm and 20cm sizes, are available for self-collection and delivery. A good option for gifting too is the Signature Duo Flavour Whole Tart.

On a large single tart, you can choose to pair two flavours, such as half lemon meringue and half dark chocolate.

Since moving from an online to physical retail space in June 2021, Tigerlily has welcomed consistent crowds to its pretty, botanical-themed space located at the Joo Chiat neighbourhood.

Ngooi was also part of the founding team at Tarte by Cheryl Koh. Invaluable skills from those days are evidently showcased in the crowd-pleasing Lemon Thai Basil Tart and the Chocolate Hazelnut Tart.

The former is a tangy, zesty treat uplifted by fragrant basil chiffonade, reflecting Ngooi's penchant for infusing her pastries with botanicals.

The latter is Ngooi's idea of the perfect chocolate tart, and it might just very well become your standard for all chocolate tarts — a caramelised Piedmont hazelnut praline sets the base for even more dreamy fillings of dark chocolate ganache, milk chocolate cream, and a cacao nib tuille finishing topped with a gold leaf.

It's decadent, rich, and oh-so-satisfying that you'll find yourself already making plans for your next pastry run here.

This patisserie was founded in 2018 as a home-based online pastry business, by local pastry chefs Germaine Li and Joy Chiam.

They first met as students at the culinary institute Ferrandi Paris in 2016 where they did their diploma in French pastry arts.

During their time in France, Germaine worked at Patisserie Yann Couvreur, while Joy trained with the pastry team at Hotel Le Burgundy which houses one Michelin star Restaurant Le Baudelaire and Le Charles cafe.

Back in Singapore, Germaine had a stint at Les Amis, and Joy at the now defunct Joël Robuchon Restaurant. 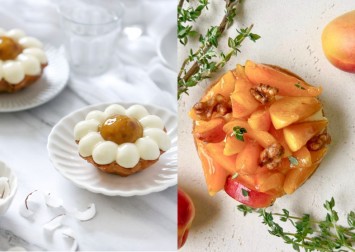 Today, the ladies have set up two outlets, one at 29 Paya Lebar Road and another small shop at 79 Lucky Heights. The chefs roll out a variety of elegant tarts and baked goods like cruffins.

Their best-selling flavour is the Orh Blanc Tart which is inspired by the French mont blanc tart, as well as the local Teochew orh nee dessert.

"We first created this product when Germaine and I were studying in Paris, and were invited by the Singapore Embassy to create Singaporean inspired desserts for an event," says Joy.

Aside from their Cognac Caramel Chocolate Tart and Spice Pear tart, pick up the new seasonal flavour — the Fig Sollies Tart assembled with juicy fresh figs. To try an assortment of flavours, go for the Tart Gift Box comprising a choice of eight tarts.

For all her artisanal baked goods, she focuses only on natural ingredients without colourings, essences, preservatives, or additives.

For her stunning Hana (flower in Japanese) Series tarts, Christine recently created a new blackberry lemon meringue tart which is pleasantly tangy and not too sweet.

The crisp, buttery chocolate tart base is filled with luscious blackberry lemon curd and topped with a silky Swiss meringue.

Recommended too is the seasonal Japanese yuzu almond tart, composed of refreshing premium Japanese yuzu curd and almond cream resting on a buttery tart base.

The creation is adorned with fresh strawberries and gleaming pomegranates seeds. Both these seasonal offerings are available in October.

"We curated our seasonal tarts last year to bring something natural and healthier for everyone while they settle into working from home and children had to adjust to home based learning.

"We freshly bake the tarts using seasonal fruits such as figs, mango, pear and apples because during the peak season, they taste best."

For instance, the Poached Pear Cashew Tart is still available until the season for Peckham pear is over around end October. For Christmas and Lunar New Year, Christine will roll out two new tarts and some gluten free goodies.

You can pre-order them online two days in advance, and either self-collect at 62 Somme Road, or have them delivered.

Look out too for a range of seasonal Japanese-style tarts, depending on the availability of the fruits.