5 hidden destinations in Indonesia to hit up in 2020 that aren't Jakarta, Bali and Bandung

When it comes to travel, the world's largest archipelagic country often gets reduced to overexposed tourist hotspots like Jakarta, Bali and Bandung.

But with over 18,000 islands spanning four time zones, there's plenty of  destinations overlooked in favour of the familiar.

With so much potential to offer unforgettable experiences for intrepid travellers, even the Indonesian government has launched a project hoping to transpose Bali's success to several corners of the country.

So while it's a given that there'll be plenty to see and do no matter where you choose to visit, take the opportunity to travel off the beaten path and find respite in an obscure place that often gets dismissed by others.

Not in the mood to ring in the new year with fireworks and fanfare? Here are some of the best places to hole up.

Who knows, you may be in for a ride and at least have interesting stories from your journey to regale friends and family in the new year. 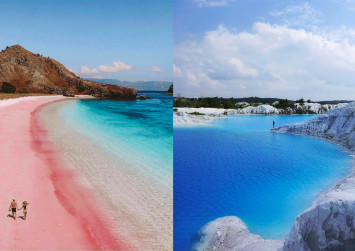 The capital of Central Java, Semarang was a hub for international trade back in the 16th century and is a melting pot of culture from early Chinese and Dutch immigrants, evident from the city's architecture and cuisine.

Most famous for their Instagram-worthy Kampung Pelangi (Rainbow Village), the colourful hues of the buildings carry an inspirational tale of how an entire village worked together to transform their hometown.

Once a drab, run-down slum, it took the efforts of a local high school principal, the entire village and $39,000 worth of paint to make it the Instagram paradise it is today.

Now, it is not only attracting tourists worldwide but also helping to boost the local economy.

The tiny Indonesian village shot to fame after being featured on Vogue in 2017, but there's more to discover than just aesthetic backdrops.

For foodies who travel where their stomach takes them, Semarang is the birthplace of ayam penyet (smashed fried chicken) and bandeng presto (smoked milkfish), so you know the food will be a hit.

While you're there, tantalise your tastebuds with must-trys like the lumpia (fried spring roll) and lekker paimo (a European crepe with an Indonesian twist).

If you're a thrill seeker, a former Dutch railway office called Lawang Sewu is reportedly one of the most haunted places in Indonesia where prisoners of war were tortured and killed in the basement. Legend has it that a pontianak haunts the basement and headless ghosts roam its corridors; the most commonly sighted apparition being a Dutch lady who supposedly committed suicide in the building.

Not a fan of the supernatural? Hitch a ride 30 minutes out from the main city and explore the remnants of an old quarry known as Brown Canyon, reminiscent of Arizona's Grand Canyon, right smack in the middle of Java.

Alternatively, unleash your playful side at Umbul Sidomukti, aptly dubbed the "playground in the clouds".

A vacation spot located on the food of Mount Ungaran, soak in a four-leveled pool 12,000 metres above sea level and go wild at the specially-built obstacle course set against the picturesque contours of the landscape.

More than just an economic hub and capital city of North Sumatra, Medan has more to offer than simply being a stopover for business dealings.

Start off your visit with a tour to Maimun Palace, the 121-year-old historical palace-cum-museum with an enthralling collection of antiques like royal gifts, traditional artefacts and European-influenced architecture.

Just as we'd like to try on Kimonos in Japan and Hanboks in South Korea, you too can play dress-up at the museum with traditional Indonesian royal outfits with a small fee of RP$20,000 (S$2).

A trip to Medan is never complete without tasting the famed swiss roll from Bolu Meranti and honeycomb cake from Bika Ambon Zulayka — be sure to pack some as souvenirs for friends and family back home.

After stuffing yourself, burn off those calories with a hike up Mount Sibayak, an active volcano that's popular as a hiking spot for nature-lovers.

Located in Berastagi, a small town a two-hour drive away, the mountain's high geothermal activity has created beautiful landforms where steam vents, sulfur crystals and the volcanic crater can be found along the trail.

After the hike, it's time to reward yourself with a soak at the Hot Spring Pesona Sibayak View, where the sulfur-infused waters come directly from Mount Sibayak itself. The best part? The place is open till midnight on weekdays and round-the-clock on weekends.

Other natural attractions in the vicinity you might want to check out is the Sipisopiso waterfall — one of the tallest in Indonesia at a height of 120 metres — and lake Toba, an enormous crater lake almost the size of Singapore!

Even if you've never thought of having a holiday in Tana Toraja, you might have come across the Torajan ethnic group and their fascinating cultural practices.

Surrounded by mountains and hidden in the highlands of South Sulawesi, the Torajans were cut off from the outside world and only "discovered" by Dutch Missionaries in the 20th century.

One of the most intriguing aspects of Torajan culture is their complex funeral practices where the dead is only buried during certain times of the year and once a certain number of buffalo have been slaughtered.

During this time in limbo, the body is preserved with formalin and remains in the family home for loved ones to visit and talk to before they are finally laid to rest within the carved out cave burial site.

Each year, the family then performs an ancient ceremonial cleaning of corpses called 'Ma'nene' where the bodies are cleaned and redressed, and their coffins replenished with personal belongings.

Alternatively, if all these talk of celebrating death is too macabre, you can always partake in other cultural activities such as weaving traditional linens and cloth by hand.

With skills that have been passed down through generations, each design can take up to two weeks to make and the fabrics are dyed using natural colouring from local plants. They also make great souvenirs because no two pieces are completely alike, so you're in possession of a one-of-a-kind Toranjan momento.

While you're there, keep your eyes peeled for "Tonkonans", the famed traditional ancestral houses of the Torajan people.

With a boat-shaped roof, the magnificence of these houses is amplified by the buffalo horns adorning the exterior and the buffalo jaw bones strung up along the side as a symbol of wealth and status.

One of the best places to find these buildings is at Ke'te Kesu, a 300-year-old village and a UNESCO World Heritage Site with six "Tonkonans" that are beautifully decorated.

Be sure to sip on some world-famous Torajan coffee while you soak in views of the scenic paddy fields and watch buffaloes wade in the mud.

With a population of over 700,000, Manado is the business capital of Sulawesi and located right at the northern tip of the island and backed by a lush mountainous backdrop.

While the south is home to the Torajans, the north belongs to the Minahasan people — a warring society famed for their unique rhythmic dances that have captivated tourists worldwide.

Their food is as fiery as their dances so you'll be in for a treat if spicy food is up your alley. The people in Manado are known to add chilli to everything they eat and some of the more exotic proteins include dog, cat, fruit bats and forest rat!

There's no need to go all the way to Mount Rushmore if all you ever wanted was to see faces carved on rock.

All you have to do is head over to Bukit Kasih (also known as the Hill of Love), located 50km south of Manada. Its name is given because five houses of different faiths are built there.

A place where anyone can gather and worship their own religion in peace, the spiritual centre is also believed to be the origin of the Minahasa ancestors tribe Toar and Lumimuut, and their faces are carved on the hillside.

Be sure to wear good shoes if you want to embark on a climb up and down the sulphuric hills — there's reportedly a whopping 2,435 steps and the smell of rotten eggs will not make the hike any easier.

Another must-do if you've made it as far up as Manado, is to visit the Tangkoko nature reserve, home to the smallest primate in the world, the tarsier.

Alternatively, swap the lush greens of the jungle for ocean blues and snorkel in the crystalline waters of Bunaken island, one of the leading dive sites in the world.

A word of warning though, you might want to avoid visiting in December and January where high winds, rocky seas and frequent thunderstorms mean boats won't leave the jetty due to safety concerns.

Tucked away in the remote south of Maluku and often referred to as the "Spice Islands", the cluster of ten lush volcanic islands were the scenes of the earliest European ventures in Asia.

Once containing comprehensive spice plantation systems constructed by the Dutch in the 17th century, step back in time and discover the colonial past of these islands at Banda Neira, the only settlement of significant size on the islands.

Delight your inner history buff at the UNESCO-nominated Benteng Belgica, a classic star fort built in 1611 to fortify the Dutch's hold of the world's only source of nutmeg and mace up until the mid-19th century.

Another one of Banda Neira's main historical attractions is the Istana Mini, the mansion of an all-powerful Dutch inspector built in the 1820s that is slowly deteriorating with time.

Diving or snorkelling in the waters of the Banda Islands is an activity not to be missed.

Picture yourself swimming out a mere 1-metre to an infinite drop-off and finding yourself surrounded by schools of fish. You might even spot a green turtle or even get the chance to swim with hammerhead sharks!

According to travel experts, March to April and September to December are the best months to take to the seas.

Know of any more hidden gems within Indonesia you'd recommend someone to visit in 2020? Let us know!