Remote working is the new normal for many companies.

It may be new for many of us, but there are companies that are operating as 100 per cent distributed teams (i.e. Team is distributed around the world and working remotely) from day one.

Playstudios Asia is one such company. We speak to Daniel Chou, Assistive Creative Director at Playstudios Asia to learn more about remote working and the mechanics involved to fine-tune the entire process.

Here are five hows we've learnt from him on thriving with remote working.

1) How can one transition properly from office culture to a remote working culture?

This is something that came from experience. You have to stop thinking that you need to work like this is an office. The fact that I don't like an office scenario is because of this.

I remember back when I was at Zynga, where there were thousands and thousands of people. Your presence reflected how hard you were working. If you're there early in the day, and you're there late at night, people would think that you're very hardworking because you're staying late.

But actually, that's not the truth. I could be fooling around on Facebook playing Farmville, or doing other things like looking for a new job - and no one will actually know. Right?

When it comes to distributed teams, your model of someone being in front of a computer doesn't exist. That's not how you should look at success. Success is their output.

And so what an individual does every day and how much work they get done within a set amount of time becomes the merit in which people view the mass.

So when people come onboard, you can be greeted by the name, but that's just a name. Your name grows within the company by your output.

Whether it's good design, good execution, good production process, or good teaching across the company. Those are the things that people value.

And that's also part of the retention metrics that are good at retaining employees. They feel that there's mastery, that they're a master at something.

They also feel a sense of purpose because the things they do are constantly improving over time. So they tend to stick around a lot longer.

2) How do you manage to stay productive despite working from home where distractions are everywhere?

When I want to go full heads down on something, for example, an annual report that I need to write for my company. That would probably take me four hours, so I know there is a four-hour time frame where I have to get this done.

I personally would just lock myself in my working space - no kids no wife allowed. And I would play a movie that I've watched a very long time ago.

In my case, it's Lost In Translation. I've seen this movie like hundreds of times.

The thing about my personal taste for music and movie, it's that music is kind of just one to two minutes with its own climax and then it ends. If you listen to music, you will experience a lot of ripple effects.

But if you watch a movie on the side, just listening to it, the climax is much longer. It goes over a 90-minute work period, and you actually follow that climatic arch as you're working.

So after the 90 minutes when the movie's done, you pause. You go do something else. Take a shower, eat something, and then you come back to the same movie again or another one you've watched before. Another 90-minute arch will then take you through the next hour and a half.

3) How do you make sure everyone is working at their full potential?

I think for companies that are first going into a distributed team model, they need to understand that it's all built on trust. In general, the people that you hire should want to do good. They don't want to just slack around at a job.

People only slack around because of really bad bosses. Let's put it this way. If your employee leaves the company, that's on you. It's the manager's fault.

If employees are slacking off, it's the manager's fault. If the employee isn't doing anything good, that's the employer's fault.

It's actually not the employee, it's you. That's the problem that you somehow built, but never realised. You kept thinking it's other people's fault. So that's the first thing that every employer needs to realise.

It's your fault for the performance of the employee because you didn't establish the right culture, the right template of hiring, or you simply didn't hire the right talent.

From my experience of hiring people, there is a very firm rule that I set down. We're forming a pact - P.A.C.T.

I'm hiring people that are Proactive, Assertive, Communicative, and Transparent.

Let them know they have to be proactive. Proactive as in communication - seeing what's happening within the tools that you've established. Letting the employees have the power to assert themselves and help others.

And that also comes from the tools that are established. So we use Slack and other communication tools, so that people can have full transparency, which is part of P.A.C.T.

Be transparent, so they can know how you think, instead of what you want to do.

That's a big part of the training. You as a manager, have to teach the individual how you think - so that they can think for you. Instead of what you want to do, where they're just an extension of your hands.

Because that is how you'll never be able to expand. You will never be able to get better at a distributed team because you're just trying to create more hands of you, whereas I've created a queen colony of myself where they can have their own colonies and then just keep expanding.

4) How can people stay connected since they don't even see each other physically?

So we do something called "Hall of Fame" in Slack. When someone does something really good, whether it's execution, production, or general goodwill from someone, that story will be posted in the "Hall of Fame". That can be seen across the company.

The second thing we do is that we have a "Water Cooler" channel, just to mimic a water cooler in real life, where people stand around and talk.

Read Also
41% of workers in Singapore would give up bigger bonus for remote working: Survey 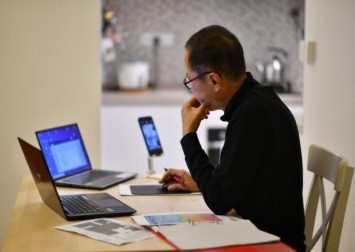 People love talking about themselves, and they want to know what other people are doing, so that's a good channel for general bantering where people can talk about random things.

The last thing we do is a team all-hands, where all of us across time zones get together biweekly or monthly on BlueJeans or Zoom and we talk about what we've accomplished and what can be improved.

This is actually on the leadership side, so the company has to provide transparency. The leaders need to communicate to the team what they've done before, where they're headed, and how they're intending to get better.

Also, within the all-hands, aside from being transparent about the company processes, we also have call-outs. We encourage management and leaders within the organisation to call out members within the team that they've noticed done really well in the past two weeks or past month.

Those call outs are also encouraged by the talents. It's not just the management doing the call outs - employees can call out other people that they've worked with too. This brings the spotlight to them.

That is enough to kind of bring in a high morale boost to make everyone feel like they're working together, and that the things that you do matter. People do see it.

5) How do you or your team deal with remote working stressors? (e.g Zoom fatigue since physical meetings are replaced with calls)

So my rule is - no meetings. In any particular way, there should be no meetings unless absolutely necessary.

Because we're built distributed, a lot of communication can actually happen on Slack or through emails.

The only meetings that I really host, are meetings that are emotional-based. Be it one to one or catch-ups with other people to see how their day was, those are the things you can't document, but are still really important.

Those are really the meetings you should actually host.

And the second type of meeting you'll host is all-hands, where you boost the morale of the entire team. That's also emotional.

So host meetings that have an emotional impact. Anything that's execution-based, process-based, whatever is related to company revenue and driving things forward performance-wise, do that either in Slack or document it in emails.

Make use of these know-hows to elevate your remote working efficiency. While you're rising above the challenges, don't forget to give your teammates a lift. Remember: A chain is only as strong as its weakest link.

This article was first published in TalentTribe.asia.