Bougie travel on a budget? $529 for one-way Tokyo to Singapore 'business class' ticket has netizens debating

A business class ticket from Tokyo to Singapore for under $600, surely not?

Air travel can be fun but sometimes, being crammed in a cabin 30,000 feet in the air for hours just isn't all that comfortable.

And not everyone has the financial means to bump themselves up from economy class to business class.

However, during a recent flight from Tokyo to Singapore, TikTok user Dy_travelogue presented an interesting option to consider if you're planning a trip to Japan.

She flew Zipair, a budget arm under Japan Airlines, and her one-way 'business class' flight ticket cost 53,000 yen (S$529), which is "around the same [price] as a one-way economy class [on] premium airlines".

Zipair offers two types of tickets — the standard and Zip Full-Flat — and Dy_travelogue went for the latter, which is the 'business class' equivalent.

On Thursday (Sept 22), Dy_travelogue shared just how different travelling in 'business class' can be compared to travelling in economy class.

She also mentioned how the Full-Flat seat option is similar to business class in premium airlines.

Zipair offers a 1-2-1 seat configuration with all-aisle access and is the first low-cost carrier to have this 1-2-1 configuration.

Speaking of the seats, the Full-Flat seats are upholstered in leather and is 50cm wide and 106cm in pitch.

Read Also
This made my day: Man treats father to his first business class flight on SIA 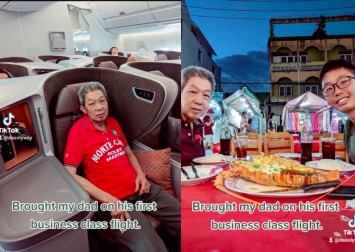 Seat pitch refers to the space between one point of an aircraft passenger seat to the same point on the seat in front of it. Similar to seat width, the longer the seat pitch, the bigger and more comfortable your space is.

For comparison, Scoot's premium seat has a width of 56cm and its seat pitch is 96cm.

Once Dy_travelogue got comfortable in her seat, she showed just how much legroom she had (something economy class travellers would definitely be envious of).

As if the added legroom was not enough, the chair is fully retractable and doubles up as a bed.

So for those who often have trouble sleeping on flights, this should — theoretically at least — solve the issue.

As Dy_travelogue was taking in the wide view from two windows, she provided viewers with a sneak peek of her in-flight meal. Unfortunately, the meal did not seem particularly premium and looked like a regular meal in economy class.

In the comments section, netizens provided their two cents on this bougie budget travel alternative.

One TikTok user, however, felt that Dy_travelogue was spreading "fake news". They claimed that the $529 she mentioned referred to the cheaper option of tickets on Zipair.

Dy_travelogue replied by mentioning that her flight was in August 2022. Additionally, she pointed out how fluctuating prices for plane tickets are normal as it is "dependent on the date and destination".

It seems like Dy_travelogue got a great deal as a quick scan of Zipair's website showed that a one-way flight from Tokyo to Singapore in October would now set you back roughly $800.

Their one-way ticket from Tokyo to Singapore is $680. Pretty decent as well.

Curiosity got the better of us and after checking the website of international carrier Singapore Airlines, we found out just how much a business class ticket can cost.

That same one-way trip would cost somewhere around $3,930.

So, if you're keen on living that bougie life without breaking the bank, premium tickets on a budget airline could be the answer.