BTO defects checklist: 6 important areas to check during inspection for your new home

HDB is known for being quick to rectify BTO defects. After you move in though, you’ll realise there’s still a problem: knowing where to find the defects.

It’s seldom as obvious as a burst pipe or a big hole in the wall – if it were that visible, it would probably be fixed already. Rather, you need to look for the small, subtle things that hide from your eyes at first. As with most things in life, small defects have the potential to grow into major problems:

How to handle and report BTO defects in your flat

Upon key collection, you’ll also be asked to fill in the Defects Feedback Form. This allows you to check for defects, and immediately report it to the on-site Building Services Centre (BSC).

The BSC location varies, but most new developments are somewhere within walking distance.

Although you’re advised to report defects within seven days, the actual Defect Liability Period (DLP) is 12 months. This commences from the exact date of key collection. If you find a defect within this period, HDB will fix it at their cost; any defects you find afterward have to be fixed at your own cost.

That said, it usually takes around two weeks to fix reported issues, so the sooner you report it the sooner it’s fixed.

Another reason to do it fast days is that the DLP only covers defects found prior to any renovation. This could mean your reno works are stalled, until the defects are all settled.

As of 2016, HDB also provides an Assure 3 Warranty, on top of the DLP. This covers ceiling leaks in the toilet or kitchen, as well as water seepage from external walls, for up to five years. Spalling concrete is covered for up to 10 years.

You could also get a third party, such as a contractor, to check for defects for you. At the time of writing, the typical costs seem to be between $400 to $500. However, we have heard of companies doing it for less, and of contractors who do this for free if you’re hiring them for renovations later.

What to look for in different parts of your flat

To keep things sequential, we’ll divide this up into:

Take note of cracks, peeling paint, or other surface inconsistencies – you may want to mark these spots with a bit of coloured tape, or post-it notes. They can be surprisingly hard to find a second time, if you just snap pictures.

Besides looking up close, you should also check the colour tone and surface from a distance of 1.5 metres (use a measuring tape). Use a strong light source when doing this.

From this distance, you should be able to spot problems such as flashing (this is when one spot of the wall is more reflective, because of painting issues), inconsistent colours, or visible brush strokes.

Walls should not feel damp, sticky, or overly rough in parts. If you see stains on the wall, this could be a sign of leaks, so always report it.

This is mostly similar to walls. Look for chipping or scratching, and especially stains that suggest some kind of water seepage. As with walls, it’s best to inspect this from a distance of 1.5 metres, with a good light source.

For tiled floors, such as the kitchen and toilet, pour water on the floor to see if the tiles are tilted correctly: the water should drain toward the floor trap, and should not form puddles anywhere else on the floor. In addition, the grouting (the space between the tiles) should not be discoloured.

Note that the skirting (the strip at the foot of each wall) is considered part of the flooring. The skirting should be straight and even, with no gaps – especially in the joints where walls connect.

The ceiling should not have any visible brush marks, cracks, or discolourations. Stains on the ceiling can suggest a major problem, as it might be caused by leaks – sometimes from the unit located above you.

Pay special attention to the joints where the walls meet the ceilings; there should not be any cracks or gaps. You may want to use a torch and ladder, to inspect these more closely.

ALSO READ: How to check your new BTO for defects

Inspect the toilet bowl, sinks and basins, and all the faucets (sinks and showerheads). Check that none of the faucets continue to drip, after they’ve been turned off.

This can also reveal plumbing issues such as low water pressure. For sinks and basins, do check that the water is draining out properly. Also check the area under sinks, such as the kitchen sink – you can put a piece of newspaper under it while running the tap, to make sure there aren’t any leaks.

You’ll also want to inspect the drying racks, as well as any cabinetry or shelving if it’s included. Take note of any bad hinges, sagging, or discolouration. Doors and drawers should open and close smoothly. For wardrobe and cabinet doors, check the alignment at the top or bottom: one door should not be higher than the other.

Besides the obvious step of testing the lights, don’t forget to inspect each power outlet. Use a phone charger to test each one, and make sure they can be properly turned on and off.

Power sockets should always be flush against the walls, with no gaps. Switches should be aligned (i.e., the off position is the same position for all of them), and shouldn’t feel loose or “wobbly”.

Do run a check on the toilet pipes as well. Turn on the tap and let it run for a few minutes, then drop a few pieces of tissue in the toilet and flush it. If the tissue floats up again, the pipe is choked.

Test the keys for each door, and make sure all the locks are working.

Doors and windows should open and close smoothly; if they “stick” when you try to shut them, it usually means they’re sagging, and there may be problems with the hinges. A warped window frame can also prevent it from shutting properly.

For the front door, remember to check that the main gate and door are properly aligned. There should be no rust on the hinges, or on any part of the front gate. 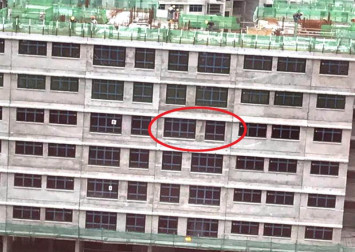 You also shouldn’t see rust on window frames. Ensure there are no scratches or cracks on the window, and that the sealant is intact. The sealant connects the glass pane to the window frame – when the sealant is not properly applied, you may see that parts of it are peeling, or that it forms odd shapes and grooves.

The movable parts of the window frame, such as screws and pivot points, should be tight; but not to the point where it’s squeaking loudly when you open or close it.

The joints between the window frame and the wall should be free of gaps. Be on the lookout for dampness or streaks in the paint, which may suggest water is coming through. Do check for leaks around windows, during the first bout of heavy rain.

Bear in mind that some defects may not show up immediately

Some defects may not appear until a few months down the road; this is why the DLP is 12-months long. Do keep extra copies of the Defect Feedback Form, just in case some of them show up later.

If you’re getting renovations done, be sure to document everything the contractor has handled; you may need to argue that a defect wasn’t something caused by your reno work.