It's not often that you see a man out-muscling someone 10 years his junior — even less likely that the two are Singapore politicians.

In an interview with AsiaOne last Sunday (Dec 4) at a complimentary screening of Ajoomma for elderly residents of Kembangan-Chai Chee, Tan Chuan-Jin revealed that he has followed up on K. Shanmugam's invitation to work out together, albeit with little success.

The 53-year-old Speaker of Parliament said: "I didn't know if he was challenging me or arrowing me, or it just happened that my name popped up.

"But I think it's really good. I think it's what we are trying to do. I've been doing this for a while and we want to encourage all of us to remain active."

Tan is an avid runner who often posts his workouts on social media. Last month, a video of him and Minister of Health Ong Ye Kung practising Muay Thai moves was shared on the latter's TikTok page.

Taking each other on in a mock spar, their 'battle' ended in a draw with both parties claiming that they were lucky since their "opponent not so strong".

On Nov 27, Law and Home Affairs Minister Shanmugam, 63, extended an invitation to Tan to be his gym buddy while responding to queries from AsiaOne. He had broken his own record and had a successful deadlift of 125kg at the Chong Pang Fitness Fiesta.

"Chuan-Jin looks as if he can do this," Shanmugam said when asked who he'd like to challenge in deadlifts. "I wouldn't call it a challenge. More of a fun thing."

Challenge or not, Tan has been making preparations in his own way.

Explaining that he had heard of deadlifting before, he told AsiaOne he wanted to try it out because it's an exercise that flexes many muscles in the body that would have otherwise been left untested.

Tan added that he left a Parliament meeting during a short break to try out deadlifting. 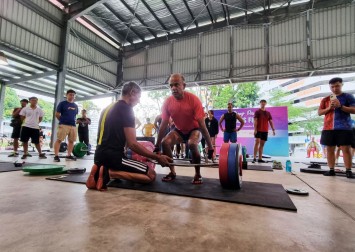 "So I put on 15 to 30kg and tried to lift and thought, 'Okay, I'll slap on another 40kg.' I couldn't move. I didn't want to strain, because I know that if you don't do it properly you could get injured,"  he shared.

He added: "I think I'm not activating the right muscles… So I think I'd better go back to the drawing board."

He also expressed interest in sharing his journey in deadlifting, including on TikTok.

But Tan also doesn't intend for his deadlifting experience to be one that is marred by injuries.

"Like my friend said, [I should] make sure it's not a 'manhood' issue, because you run a very real risk of injuring yourself.

"But we pick up new skills — lifelong learning, right? So I'm looking forward to my own journey and trying to figure out how to do that. Hopefully, others will also journey with us along the way."

The complimentary movie screening for 500 senior residents on Sunday was organised by Tan and the Kembangan-Chai Chee Citizens' Consultative Committee as part of efforts to help the community at large, he also shared.

Additionally, Ajoomma lead actress Hong Huifang and her husband, actor-director Zheng Geping, were also present at the screening to meet and take pictures with the senior citizens, all of whom eagerly lined up after the movie and waited their turn.

Tan added: "We wanted to organise this activity for our residents to come out and watch movies because many of them have not been to cinemas for a long time… so bringing the community together is a big part of what we do."

For some of the attendees, it was the first time they had ever stepped foot into a cinema to watch a movie, while for others, the last time they did so was decades ago.

Tan added he and his team also provide over 100 daily meals to those in need in their community, as well as fresh produce, haircuts and vaccinations.

ALSO READ: Ong Ye Kung vs Tan Chuan-Jin: Who will emerge as winner in this Muay Thai match?