A dad dilemma: Should you take paternity leave when you've just started a new job?

You know how it is. You've just started a new job, so you want to work hard to get to know the team and achieve things before you take any time off. Holidays come much later, right? That's always been my way of working. I find it hard to enjoy a break in a new gig without hitting some professional milestones first.

But what if, like me, your wife is heavily pregnant and you have paternity leave on the horizon? Should you take it? Will your colleagues think poorly of you for doing so?

Worse still, from another perspective, will you be letting your family down if you don't give them quality time during the formative period straight after birth?

It's a complex minefield for a father-to-be to navigate. Especially if you've just started a new job, as I have here at theAsianparent.

"How about simply following the prevailing cultural norms?" you might ask. Well, I know friends who have taken the maximum entitlement. And I know buddies who have taken no time out at all from work.

I try not to judge them, whichever extreme of the spectrum they are on, because each family is different. There's no one-size-fits-all solution here.

Even so, the government in Singapore recommends two weeks of paternity leave - paid for by employers. That is pretty generous, as are many Asian countries actually when compared to global standards.

Japan and South Korea, for example, offer father-friendly entitlements that stretch to 30 weeks and 15 weeks respectively.

However - and here's the rub - that's only on paper. In reality, very few fathers take time off - fearing for the health of both their careers and their companies, if they do so. In fact, Unicef research pointed to just 5 per cent of Japanese fathers opting to take the opportunity in 2017. That figure is pretty shocking.

ALSO READ: Fathers should be more active parents and support their wives in parenting

The situation is worse still in other parts of the world. In America, a polar opposite to developed countries in Asia, even legislated paternity leave is non-existent with the exception of a few states and a limited number of progressive employers.

In fact, the whole of the West is extremely hard-hearted when it comes to new dads. Europe and the United Kingdom offer either only a few days off or a limited amount of salary coverage - or a combination of the two. Closer to Asia, Australia is only marginally better.

So for dads, this is the dilemma. Even if you are lucky enough to live in a generous nation like Singapore, where the government has recognised the importance of baby-bonding time, the situation is far from straightforward.

Do you take the full two weeks off work? Settle for a compromise of just one week? Or just get straight back to the office and hope to make up for the lost time with mum and baby in the evenings and at weekends?

So compelled was I to garner further opinion from others on this conundrum that I posted a question on theAsianparent's community feed. I asked: "Do you take paternity leave? And, if so, for how long?"

Read Also
Millennial fathers are getting more involved in parenting 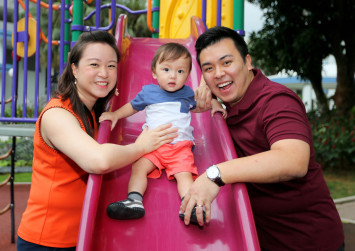 Of the nine responses at the time of publication of this article, five people said "two weeks". Our own founder and group CEO at theAsianparent, Roshni Mahtani, revealed in the same feed that her husband (also a tech company CEO) took only one week.

Meanwhile, English-language daily The Straits Times reported in August last year that six out of 10 dads in the country did not take paternity leave in Singapore - according to the Ministry of Social and Family Development statistics. Opinion remains fundamentally split on the issue, it seems.

At the moment, my wife and I - it should be a joint decision, in our view - are leaning towards me taking one week off. Or taking two weeks away from the office and working from home during the second week, just so that I can handle anything urgent.

Although then again, it's hard to make that call at this stage. When our baby is born, we might feel differently. My wife might want me to be fully focused on our new arrival for the entire two weeks. I too might feel that way.

Nevertheless, it won't be an easy decision to make. And if that's still the case in 2020, are the "woke" times we are living in really as enlightened as we think?