Clad in a blue blazer with patchwork elbow accents, Desmond Chow poses for a picture with two crawfish, fiddling with them as he holds them up next to his face.

Crustaceans are not usually the props for most of The Peak’s photo shoots, but they’re given centre stage this time as they are something special to Chow.

Singapore Crawfish’s marketing managing partner is one of the few people with a deep understanding of the life cycle of freshwater crawfish. His small company started in 2018 and soon evolved into a farm at Sungei Tengah.

Two years of research and testing later, Singapore Crawfish has narrowed down the process of crawfish breeding to three elements – aquaculture technology, genetics and a secret feed formula.

Using these critters, he says, the food security problems beginning in Southeast Asia can be alleviated.

To reduce the barriers of entry to a minimum, its aquaculture system, which has already been purchased by farms in Indonesia and Malaysia, can be installed as a whole, including equipment and technology that removes bacteria from the water, automatically separates juveniles from the adults, and tracks growth.

Astacology or the study of crawfish hasn’t always been Chow’s passion. He is a former lecturer in international business management and entrepreneurship who can now recite statistics (about crawfish, of course) off the top of his head.

Since putting his all into developing what he calls “blue gold”, named after the colour of the crustaceans, he’s travelled extensively to find out how other countries grow theirs. Returning to Singapore, he has instilled the best aspects of farming into the company’s current nine-part aquaculture system.

Read Also
From corporate jobs to cockle masters: Duo gives up 6-digit salaries to be hawkers and has no regrets doing so 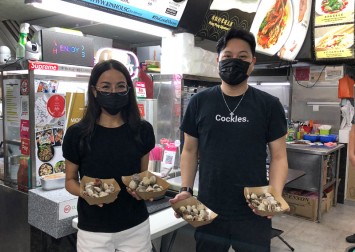 As most of the farmers he encountered on his trip were middle-aged, he wondered: “What happens to their land when they retire, and how many young people are farming? It doesn’t matter what IT systems and Bitcoin you have. If you lack food, you’re still going to die.”

It is this that drives Singapore Crawfish’s success, and Chow is an ideal spokesperson for the company as it prepares to consolidate its three farms in Sembawang, Lim Chu Kang, and Sungei Tengah into one indoor farm. Additionally, it recently opened an eatery called KIAP that offers a truly farm-to-table experience, a rarity in our land-scarce nation.

Chow believes that the crawfish’s hardiness and rapid reproduction rate contribute to their popularity as an ideal source of protein. One female crustacean can give birth to 1,000 juveniles every time and little effort is required to ensure they become adults; he’s even had a student grow crawfish in a bathtub.

In Indonesia, rice padi farmers who cultivate aquaculture have been able to earn up to $30,000 from one hectare a year, rather than the $7,000 they would earn from only cultivating rice.

The company has been actively looking for ways to diversify its business by “targeting the entire value chain”, says Chow. He shares a project that involves making instant noodles with actual crawfish tails.

Taking inspiration from the chicken and beef cubes available in China and Taiwan, Singapore Crawfish has partnered with Singapore Polytechnic to produce mala flavour crawfish noodles.

While crawfish is big business in countries like China and the US, it takes education to get diners here interested in them. “We do this in part through working with universities and schools to spread the word that farming is not a low-paying job.

My goal is to get more students involved in agriculture and aquaculture. [Rearing] crawfish is the easiest way to be profitable,” he enthuses. Soon, Singapore Crawfish will open the world’s first pathogen-free hatchery with a Crawfish Brood Stock Multiplication Centre on our shores.

Due to the lack of space, Chow maintains that storing juveniles while they’re still small is more efficient than sending them to neighbouring countries to mature. In exchange, the research and breeding programmes can be done here to ensure consumers get the “wagyu of crawfish”.

As he and his team continue to promote crawfish education and self-sustainability as part of Singapore’s 30 by 30 campaign, consumers can expect to see more of the crustacean. Now, if the crawfish nasi lemak and rendang in Indonesia and Malaysia are anything to go by, we’ve got a lot to look forward to.