Why I Do What I Do: She eats the weight of a newborn

Why I do what I do is a bi-weekly series where we showcase uncommon professions and what it takes to go down that career path. In this episode, we feature Sarah Ow, a competitive eater. At first glance, you won’t be able to tell how much of an appetite she has. At all. We find out how she possibly could have gotten this ‘skill’ of big eating after leaving her time as a flight attendant of 11 years to pursue this. #competitiveeating #bigeating #food

Watching how Sarah Ow demolishes a six-inch Subway sandwich (an egg mayo, if you must know) for a challenge we threw at her, you'd think she had been starved for days.

The feat was accomplished in just 76 seconds, or about the time it took for a lift at The Pinnacle@Duxton to travel from the 26th floor to the ground floor.

More amazingly, this was accomplished right after the 32-year-old ate a stack of delish souffle pancakes for "lunch", a term used very loosely in her case.

In fact, the eating almost never stops for Sarah, a professional competitive eater. She has the distinction of being only one of two full-time competitive eaters in Singapore (the other being Zermatt Neo) and is also the only woman with the title.

For someone who can eat the weight of a newborn (she's downed 3 kilos of chicken rice) at a sitting, this was probably nothing. Sarah admitted to us that she was only 40 per cent full after polishing off the pancakes and two egg mayo sandwiches for the challenge. 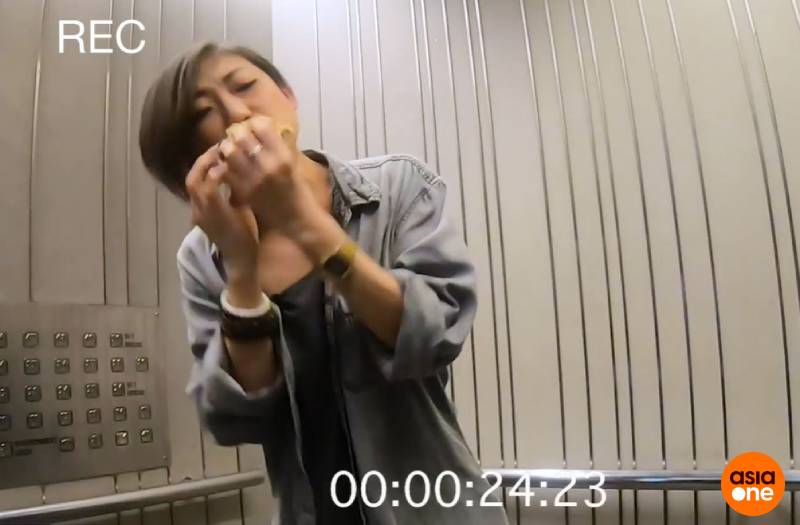 She may have one hulk of an appetite, but in reality, the former flight attendant cuts a slim figure — something many people are surprised by.

Weighing about 50kg on average, which is actually slightly underweight for her 1.68m frame, Sarah says her weight "fluctuates a lot" because of what she does.

But she admits she's always been a big eater, in part due to her stewardess job at Singapore Airlines where she stayed for 11 years.

"A perk of being a flight attendant was having free breakfast and that would be my one meal for the whole day sometimes.

"I love breakfast so much that I'll just hang around until 6am (after landing at 3am) and I'll whack breakfast, sleep the whole day, and then I'll be like, okay I'm ready to go somewhere else."

"And so basically it was like one big binge and my stomach was really used to that kind of [portion] as well. So maybe that's why, I don't know."

How it all started

Being a homesick flight attendant about four years ago was also what thrust her into the world of big eating.

"I was in London and it was raining and it was so cold. I saw a picture of this guy on Facebook, and he was holding a gigantic bowl of laksa. The Singaporean in me just screamed at the photo and like 'I need that bowl of laksa!'"

While that laksa wasn't actually available for eating, a three-kilo plate of chicken rice was. She took up the challenge after landing in Singapore, finishing the chicken rice in 27 minutes and seven seconds, just shy of the 25-minute record set by Zermatt.

At the end of her first-ever eating competition, her interest was piqued. "I like special things and I thought this was really special and I wanted to do something with it."

And do something with it she did, by quitting her flight attendant job and going into competitive eating full-time, under the management of Food League SG.

So how does she keep so slim with her current eating habits?

The self-professed "fat kid" admits she struggled with weight issues when she was younger. 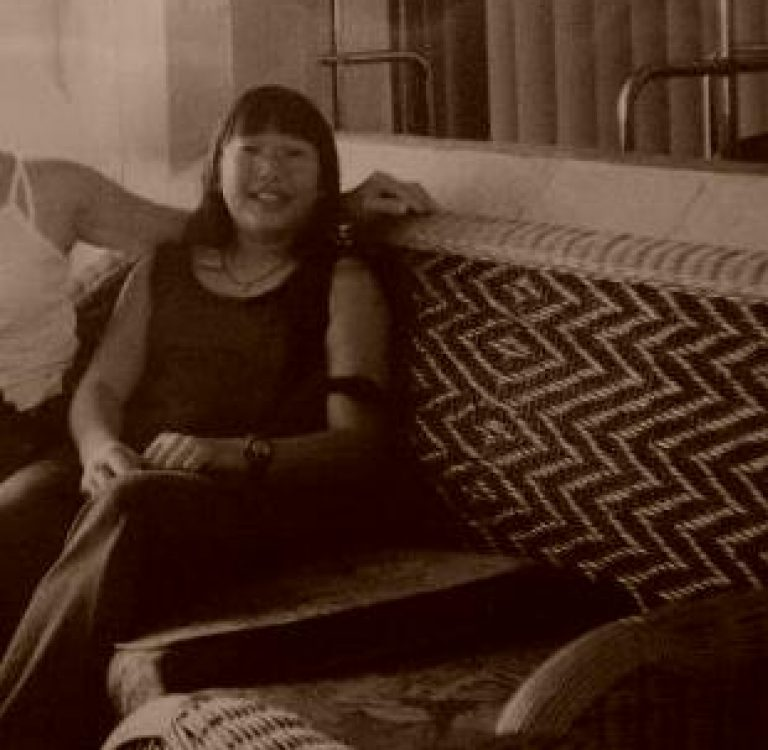 Sarah when she was a kid. PHOTO: Sarah Ow

The "worst period of her life" was when she entered polytechnic, where she would run on empty quite literally and "exercise at ridiculous times". She dropped a shocking 11kg within a month, until her best friend got her to snap out of it. But "no more of such nonsense", she declares.

Now, the last thing that Sarah does is count her calories, but exercise is one routine that she's continued because of her "job".

She says: "I like to look nice, I like to look slim of course, I'm very vain. So I will do things to ensure that I will maintain my weight. Exercise definitely has to be one of them, just to off-set whatever you're doing."

Some people also adopt fasting as a way to manage their weight, she adds.

Few can say they eat for a living, but Sarah's job is far from easy or glamorous.

One of the initial struggles she faced was handling the opinions of her parents, who weren't too excited to see their daughter "onscreen and being very un-ladylike".

"Eating a lot can sometimes [project] a more masculine kind of image... I guess that was [something]I had to kind of iron over with my parents," says Sarah.

"When they ask me what I do for a job I'd say I do marketing with food, so I eat onscreen and I smile and make food look good, and they're ok with that."

But the truth is that "speed eating hotdogs is not going to look pretty onscreen no matter what you do", she adds.

Another issue she has to deal with, like all online personalities, is dealing with haters on the internet.

"If your skin very thin, I think cannot. You really need to build up some sort of armour before you put yourself out there. I guess it can get to you sometimes but you learn to kind of breathe it off and laugh it off, or think of something smart to say."

One misconception that she's had to manage though, is that while she "sometimes" eats five meals a day, it's not always a big meal each time, unlike what some may think.

"They take it the wrong way and go like 'oh my god, she eats five meals a day and every meal she eats (the weight of) a baby eh, how she does she do it, and she's so slim!'", she exclaims.

"I'm like okay. Back this up guys. This sounds very good for me but it's not true."

Sarah says that on competition days, the meal could last her "for two days", and she may only crave for yoghurt or fruits the day after.

And the most she's ever eaten? Probably 4.2kg of chwee kueh (FYI, she recommends the Bedok Chwee Kueh stall), one of her favourite foods.

Eating that much can't be good on one's body, and it's something Sarah agrees with, stressing the importance of managing your body.

"Is competitive eating healthy? I'd say no. It's unnatural."

The sodium content in some of the foods at speed eating competitions also weighs heavily on the body.

"Usually the food that you eat is really high in sodium, you really feel it it's like MSG punching you straight in the face," says Sarah.

Thankfully, her general medical checkups so far have given her the all-clear... to eat more, we suppose.

Beating her friend and biggest competitor Zermatt in a burger-eating competition in JB counts as one of the highs in Sarah's career so far.

But competition has its ugly side, or in this case, is just plain gross.

"I won't name names, but there was a brunch-eating competition at the time, there was ice cream, there were hot dogs, literally everything you could think of for brunch — waffles, pancakes ,and bacon.

"So this person that was beside the whole bunch of us, he decided to chew up all his food and spit it into the glasses of water and drink it down," Sarah recounted in horror of "one of the worst experiences" she's ever had.

"Being beside it and having to shovel down the same food that he put into the glass is very unnerving."

Sarah, who's divorced, says she spends at least $1,000 a month on food. Her current partner only found out about her unusual "skill" into their second date.

Read Also
She's 51, still plays with bubbles and gets paid for it 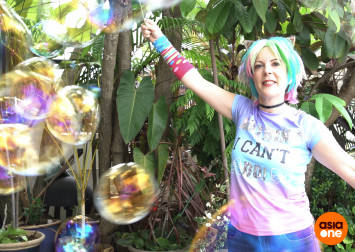 She recounts, laughing: "He was like, 'Wow, quite a bit huh', he was very politically correct about it."

And when he does cook at home for the both of them, "it's like for four people".

Even though her current job doesn't pay as much as when she was flying, she has no regrets.

"I want to win, I like to win, and I want to see how far this is going to go and if I can win at things I enjoy doing, which is eating and having food. I mean, not everyone can say that right?", says Sarah proudly.

For the record, two hours after we parted ways, Sarah ambled on to Timbre+, where she chowed down on a Japanese beef bowl "with onsen egg" and one beef kway teow soup. All in one sitting.

#why I do what I do #Food and Beverage sector