Anthea and Gabriel had wanted to go the DIY/contractor route for their 5-room flat in Bidadari until they chanced upon Earth ID.

The couple was so pleased with the suggestions given by the two designers they met with, Wei Sheng and Aloysius, that Earth ID became the first and only interior design firm they saw.

“We decided to go with them as the ideas they suggested were better than what we initially thought of,” Anthea tells Renonation.

One of the few things they requested for was an open-plan kitchen with an island bar counter.

The frequent hosts loved having friends over and the open concept would create a sense of spaciousness while allowing their guests to mingle around freely. 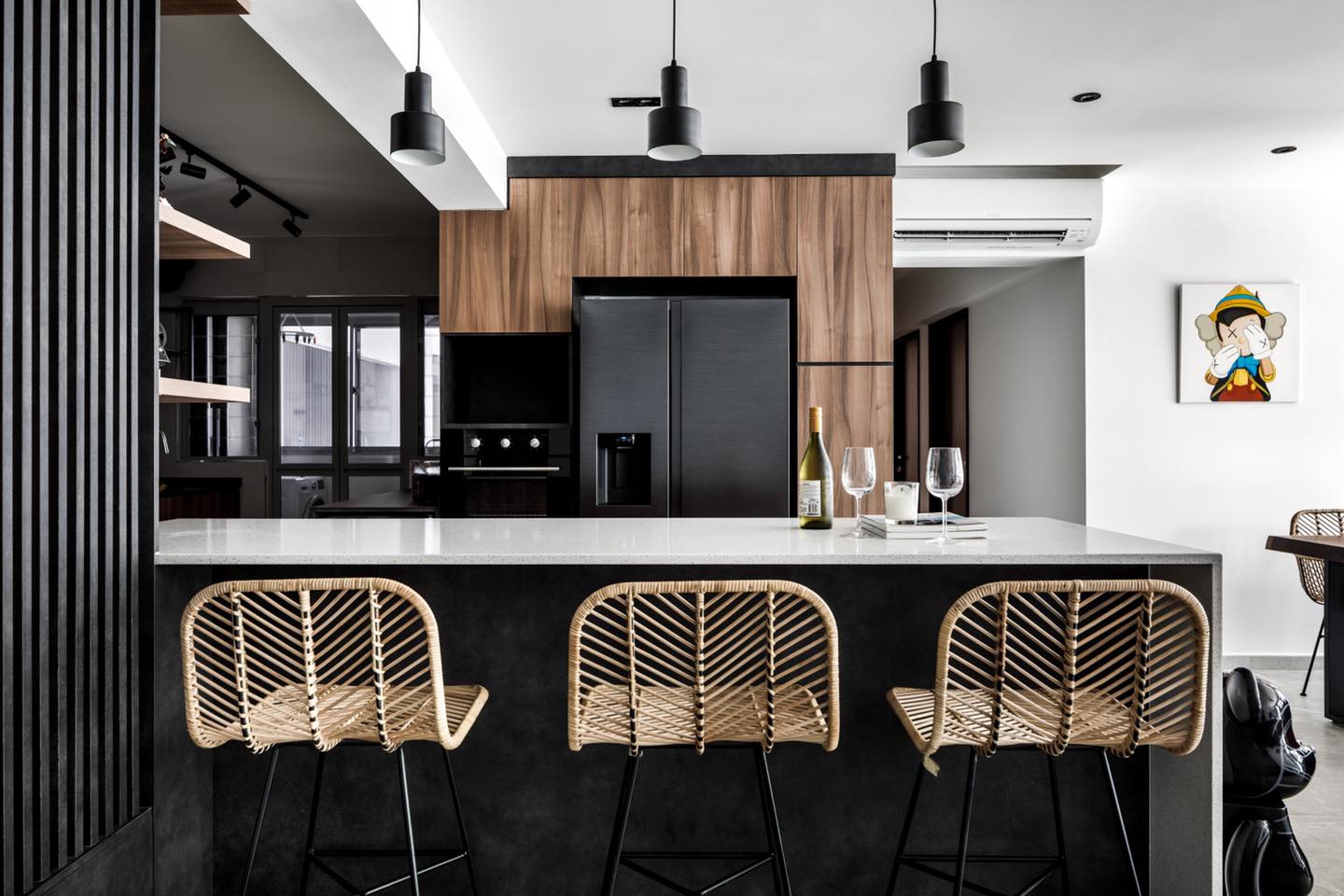 The renovation costed $50,000 and took a total of three months, but it all went down without a hitch, which the couple attributes to their decision to hiring an interior designer.

“Everything was handled well by our designers, who kept us updated throughout the renovation.

"There wasn’t a need for us to take time off work to check on the progress,” says Anthea.

“While we roughly knew what we wanted in our heads, we didn’t know if they would all go well together.

"So this was where their expertise and experience came in; they helped put everything together and improved on our ideas.” 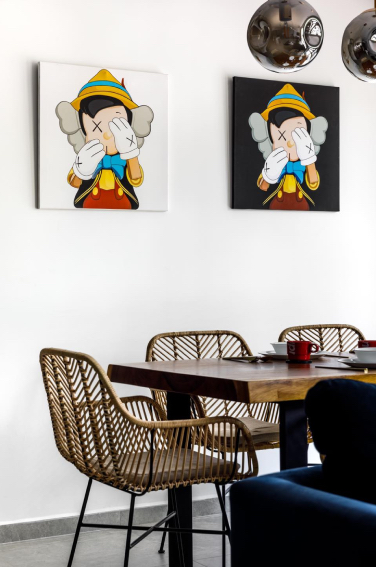 And helped they did.

The living room’s TV wall for instance is set in a cement screed-like backdrop with gold detailing that complements their gilded coffee table (from Taobao) and velvet blue sofa with gold legs (from Castlery), all while adding a touch of sophistication to the space. 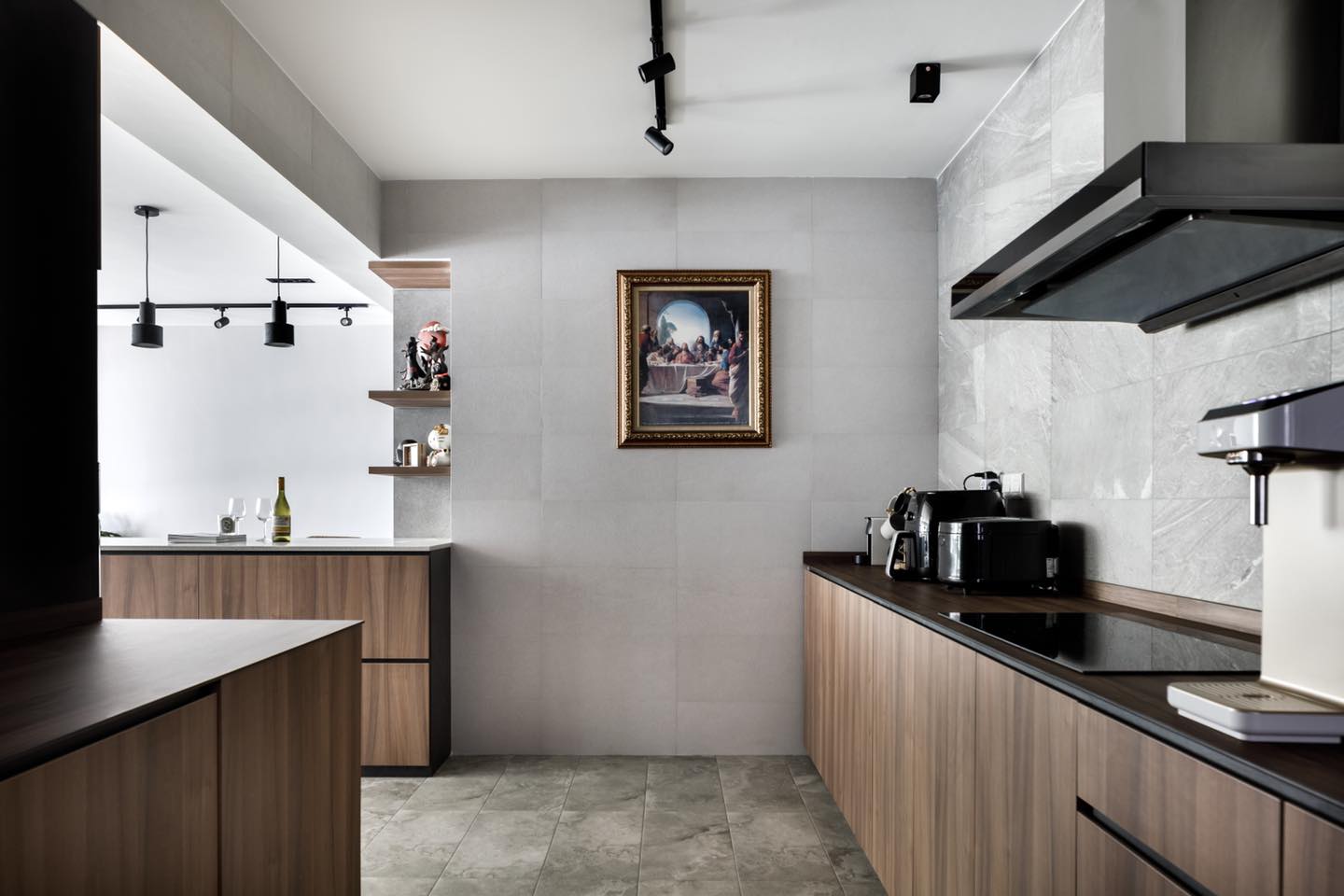 The kitchen features a similar contrast.

Cabinets clad in woodgrain laminates and walls and flooring covered in concrete-like tiles serve as the perfect backdrop for the gleaming and state-of-the-art appliances.

Rattan chairs seen in both the kitchen bar counter and the dining table add a casual, resort vibe to their home.

They were specially customised as the couple wanted a specific pattern that they could not find in the stores.

The apartment adopts a mostly neutral scheme. You see mostly cement screed and wood tones, greys and whites with occasional highlights of blacks and metallic. 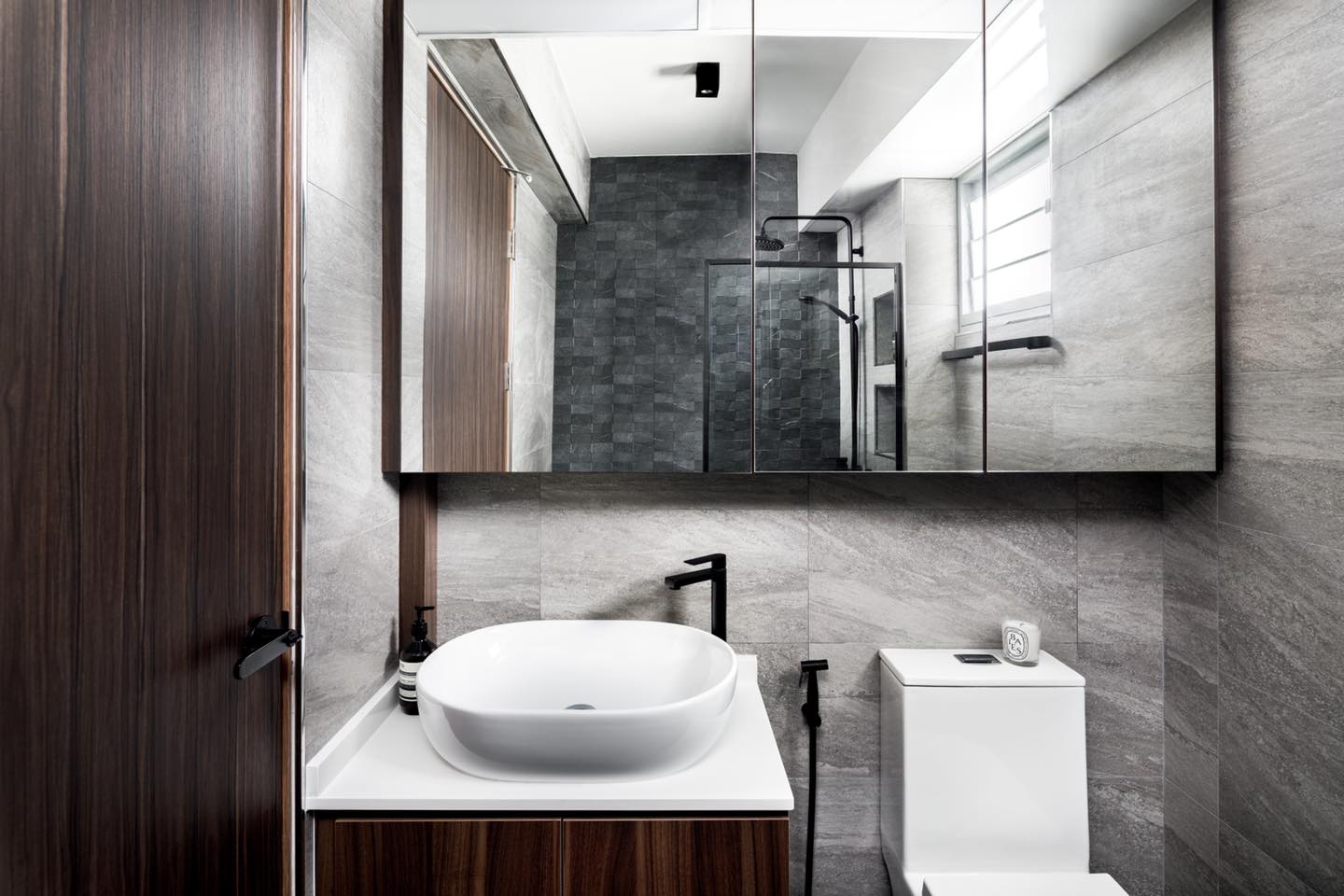 It gave Anthea and Gabriel the freedom to decorate with other colours, while allowing their colourful figurine collection to pop. 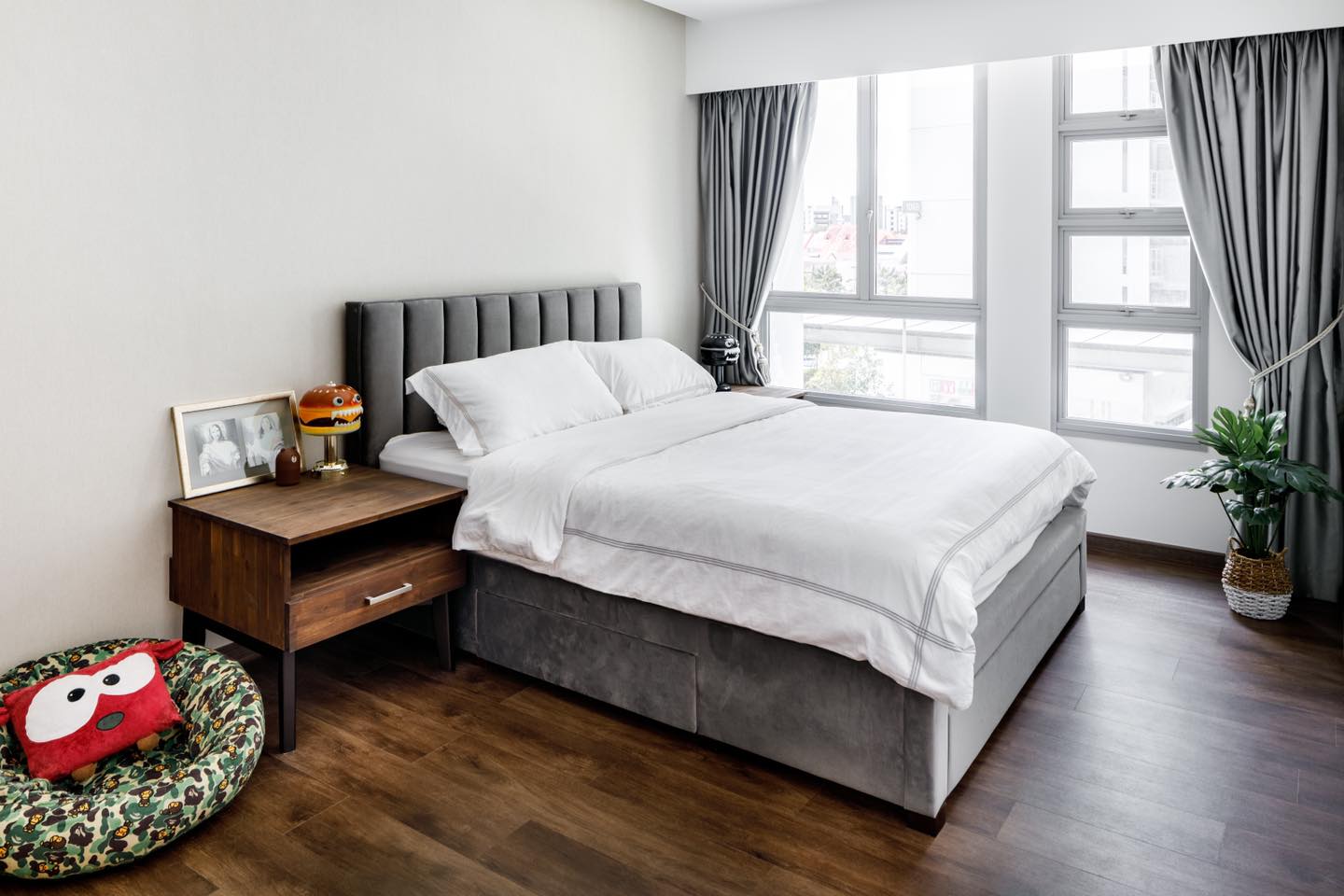 One of Gabriel’s favourite parts of the home is the study, which functions as his personal space and gaming den while doubling as a guest bedroom.

A Mona Lisa light box (from Ikea) hangs over the bed, adding a quirky touch to the space and showcasing the couple’s fun personalities. 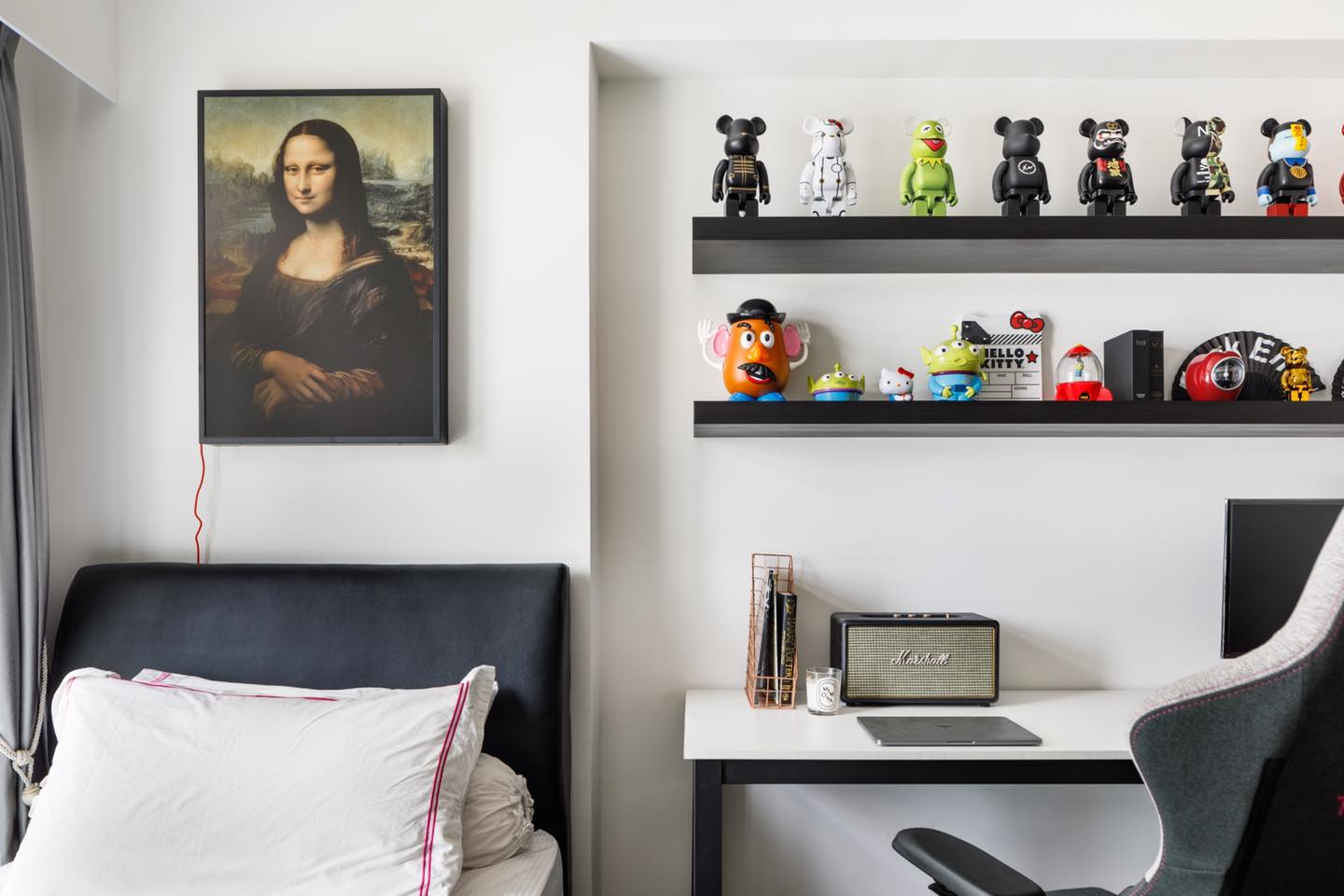 For Anthea, it is the walk-in wardrobe which holds her heart the most.

“I finally have enough space to display my clothes, bags and accessories!” 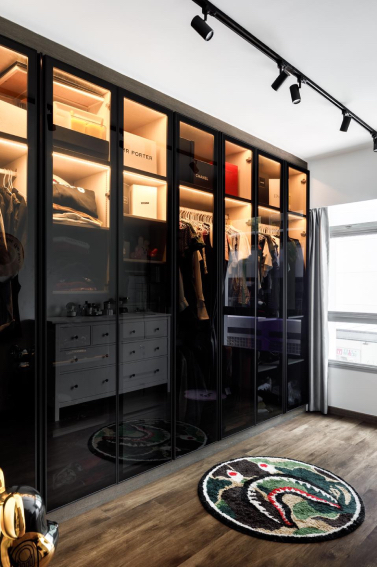 The walk-in wardrobe is indeed a massive catchall, stretching wall to wall and all the way to the ceiling in one of the spare bedrooms.

Tinted glass doors make it easier to see where everything is when it came the time to get dressed, but it also contributes to the air of modernity and class that is seen throughout their home.