Working from a hotel is all the rage, or at least based on the number of hotels that have rolled out packages to cater to those who are not yet back in office and are looking for an alternative to working from home.

However, getting your own hotel room can prove to be pricy (think at least $70 and up). Hence when I discovered that Hilton now has its own Work from Hotel (WFH) package that was just $26++ ($30.60 when you include the taxes and charges), I decided to head down to give it a shot.

And if you're wondering about Furama Riverfront's $15 WFH offer, it has shot up to $28, albeit with more dining credits than previously.

The biggest advantage that Hilton has is its convenient location along the Orchard Road stretch, and it's just a short walk away from Orchard MRT station. However, it isn't a completely sheltered path, so you'll have to have an umbrella handy should it rain.

The other nice touch about Hilton's offering is that it includes either a breakfast or lunch set, so you don't have to worry about going hungry if you just want to stay within the hotel the entire time to complete all your work since you get to be here from 9am to 5pm.

And you won't need to be concerned about incurring extra cost on top of your "entrance fees", since we all know that hotel food is on the pricier side.

Reservations required as there are limited seats

Unlike the other places that we tried working from, reservations are a must, either by phone or email to Hilton Singapore, and should be done at least two days in advance.

On the bright side, it means that you don't need to rush down to ensure you get a seat, though going early still has its advantages (more on that later). However, spontaneously deciding that you would like a change of environment for the day is then no longer an option.

The reason for the compulsory reservation is because there are limited seats for this day-only offer. I'm told that there are just four to six tables available daily when I made my reservation, mainly because these are the only tables with power points next to it within the restaurant premises — yes, this WFH takes place at Opus Bar & Grill on the ground floor. And if you are alone, you get the whole table to yourself, even if it can seat up to five people — the perks of social distancing being observed.

What to expect: Comfy seats, dim lighting and attentive service

Opus Bar & Grill happens to be where breakfast for hotel guests is served, so in the early hours it can be a tad noisy. The allocated seats for WFH are all within the bar area, which is right at the entrance, so you'll get to see the lines of guest having their temperature taken and whipping out their phones as per the norm this year. However, the hubbub does die down at about 11am, when everyone's tummies are filled.

Here's when arriving early might be to your advantage: One of the tables is in its own enclave of sorts, ensuring minimal noise and distractions if you are there to do some serious work (or serious writing in my case) — walk alongside the bar and make a right turn to find it. Unfortunately, it was occupied when I got there.

Otherwise, most of the seats are in the "public area" and while working there is certainly possible, this also depends on who's working alongside with you. I happened to be seated next to a group of five who were using the place for what seemed like a full day of non-stop discussions and calls — they even had breakout sessions.

The seats in Opus while spaced out, still allow you to listen in rather clearly to the neighbouring tables' conversations. And it just so happened on the day that I was there, all seats that had power points beside it were all taken.

To the credit of the staff at Hilton Singapore, upon hearing that I was starting to get bothered by the constant chatter near me, they sought to find an alternative location for me to work at. This is how I ended up at the back of the restaurant, tucked away in a corner for the afternoon. I am told that the area usually isn't open for WFH though, hence if working with bustle around you isn't your cup of tea, you may want to reconsider.

If you are used to working with bright light or are fortunate enough to work by a window that allows natural light to stream in, the lighting here is neither of those, as expected for a place that is popular for dinner reservations. Working at Hilton means having warm mood lighting that makes things cosy. Luckily there's free coffee, tea and water which to keep me alert throughout the day.

The food that's served for lunch, which I opted for instead of breakfast, is a good portion. Any more and you might have food coma for the rest of the day. You get to pick a main dish, and either an appetiser or dessert from their usual set lunch menu, which costs $18++, and there are vegetarian options available too.

If you are feeling peckish, there is a 30 per cent discount for all a la carte menu items, or you can take a few steps out to the 7-11 or Cheers convenience stores that are in the building next door.

The verdict: It's well-priced and in an easy to access location

This is currently one of the cheapest options available for Working From Hotel that includes a meal. And given the limited number of people they let in to work there for the entire day, it would mean that you should be generally left undisturbed, though this is dependent on the other people who are using the premises alongside you. 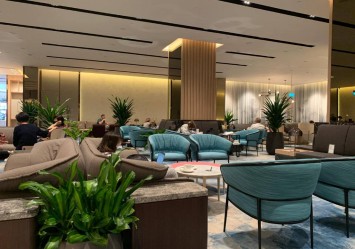 And the staff at the hotel are generally attentive, and understanding — though 5pm arrived, most people continued on with their laptops and discussions without much interruption as most of us knock off at 6pm even while working from home, if we're lucky.

And even when I left at about 6.30pm, fellow Hilton WFH "companions" still remained, though granted they might have been staying for dinner. That said, the deal does specify that it is only till 5pm, so you might not want to push your luck.

The biggest advantage to working from Hilton is its location. At least for me, it's easy to reach, and if you are meeting friends (not more than five) for dinner in town, you won't have to rush down after work, which I oft find myself doing.

That said, for myself, other than the advantageous location since I had rather active WFH companions for the day, there was little difference from working from the office. Despite having good earphones, I miss the quiet that I get when working from home that lets me concentrate without interruptions or distractions.

ALSO READ: I paid $15 to work from a hotel lobby for a day and I'll be back again