A month after Shake Shack unveiled its fourth outlet at Suntec City, the American burger chain announced yet another spanking new outlet — this time at VivoCity — on Oct 21.

The new restaurant is slated to open its doors to the public on Dec 1, so if you're a Shake Shack fan who lives or works near Harbourfront, this might be a good time to mark your culinary calendars.

The spacious new restaurant is located on the first level of the mall near the entrance to Sentosa Boardwalk, so aside from air-conditioned seating, there will also be an alfresco area where you can enjoy your food outdoors with a view.

Besides their much raved-about burgers, Shake Shack is also known for its concretes, which are essentially frozen custard blends.

Each Shake Shack outlet in Singapore has its own unique flavour of concretes, so it's no surprise that their VivoCity outlet has two new exclusive ones: Viva La Vivo and Sugee Boogie.

Having previously tried the Shack Attack and Jewela Melaka concretes from the chain's Jewel Changi Airport outlet, I was curious to see how these new flavours would measure up.

The concretes are definitely what some would call Instagram-worthy. These came in cups emblazoned with Shake Shack's iconic symbols while its contents were generously garnished with its respective camera-worthy toppings.

Though photogenic, the dessert tasted like regular vanilla ice cream with hints of sweetness from the strawberries. I found that the sugar cone shards and rainbow sprinkles did add a nice contrasting texture to the creaminess.

But as compared to other Shake Shack concretes I've tried, it was rather plain. Though I wouldn't mind eating it again if I had to.

On the other hand, the Sugee Boogie features vanilla custard blended with chunks of orange citrus sugee cake from Mrs Kueh, a brand run by a mother and son duo that specialises in Nyonya kuehs and cakes.

The crumbly sugee cake had been infused with a fruity orange flavour, so it added a nice zesty hit to the creamy vanilla custard. Admittedly, when I took my first bite, I found the flavour combination a tad bit unusual — but it started to grow on me after a while.

If you're not into fruity flavours, however, this dessert may not be up your alley.

Would I order it again? If I was up for something refreshing and fruity, I actually would. 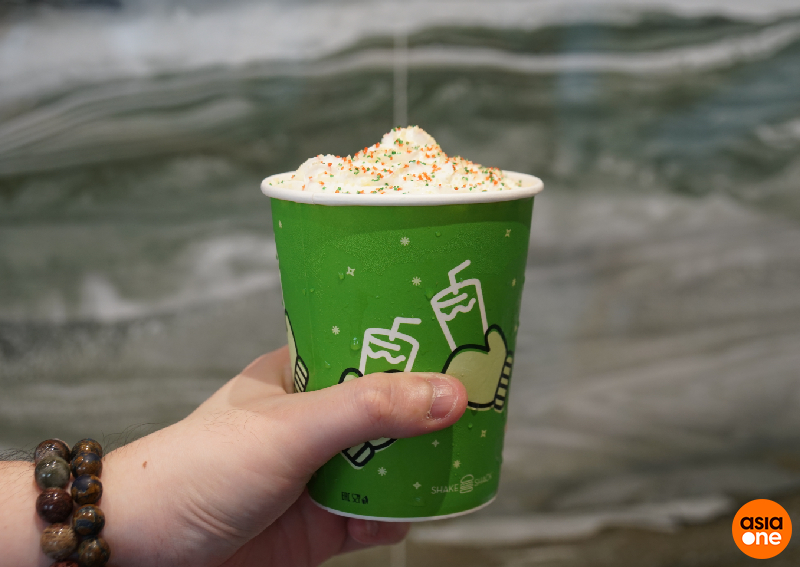 Unlike the store-exclusive concretes, the Christmas specials will be available at all five outlets in Singapore throughout the month of December. Each cup costs $7.80, and you can pair it with your burger and fries for a festive touch.

On top of that, Shake Shack will also be carrying out The Great Shake Sale, an initiative to raise awareness and funds for the Children's Wishing Well, a Singapore-based non-profit organisation that supports children and youth from low-income families.

To participate and get into the spirit of giving, all you need to do is purchase vouchers for the Christmas Cookie Shake, which will be sold at $2 each.

You can also purchase an unlimited amount of these vouchers from Dec 1 to 6 from any of the five Shake Shack joints in Singapore, but these can be redeemed till the end of the year.