The recent popularity of Netflix reality series Bling Empire has placed the spotlight not only on the wealth (or lack of) of its super fancy Asian cast members, but also on the alternative healing therapies featured on the show.

One of them is hypnotherapy, which Korean-American model Kevin Kreider goes through to resolve his abandonment issues. Adopted from birth, Kevin gets supposedly regressed to a point where he's back in his mother's womb and feels her emotions, but we'll come to that later.

Reality TV aside, when many of us think about hypnosis, it probably conjures up images of people being "mind-controlled" while on stage, be it barking like a dog or clucking like a chicken.

Then with a snap of a finger, participants come out of their trance-like state without any memory of what had happened just minutes prior.

This example is just one of the common myths of hypnotherapy, according to Aloysius Tay, 51, who's been a hypnotherapist for more than eight years.

"Hypnosis for entertainment is called stage hypnosis, and it has created a bad rep for us," laughed Aloysius.

Another myth is that hypnosis can make you do something you don't actually want to do.

"Hypnosis doesn't go against your will, it's not brainwashing. You actually know what you're doing," he emphasised. "If you expect that somebody else can take control of your life, it's not possible."

One reason that stage hypnosis works, says Aloysius, is because participants are already "ready to have fun" and prepared for the experience.

"They have already enabled themselves to be hypnotised."

Hypnotherapy, Aloysius explains, is about working with the subconscious mind to resolve issues that have been deeply buried in one's psyche.

And Aloysius believes anyone can be hypnotised to some degree. "Your mind wanders every day, such as when you're on the bus.

"Do you count the bus stops? That daydreaming state is also similar to a state of hypnosis," said the married father of two.

Aloysius, who's also a trained counsellor, agreed to give me a glimpse of what hypnotherapy entails. I got to sit in his comfy white recliner for about 20 minutes while he brought me through what usually happens in a session.

Aloysius begins the session by taking me through a series of exercises to get me into a more relaxed state of mind. With instrumental music playing in the background, I close my eyes — an optional step, but he had shared earlier that doing so helps to minimise distractions. 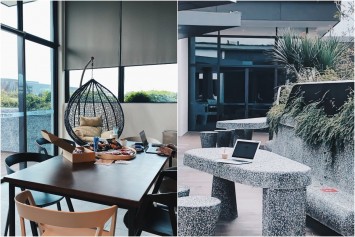 I'm asked to "let my mind wander" and ignore external noises and focus instead on the sound of his voice.

Almost expectedly, I'm told to imagine my "eyelids getting heavier". Aloysius leads me to open and close my eyes twice, each time prompting me to "go deeper" into relaxation when they shut. I also observe how he slides in sentences that bank on the power of suggestion, including phrases such as, "you will remain relaxed until the end of this session".

Then he lifts up my leaden arms and drops them one at a time, before guiding me through a series of breathwork and visualisation exercises. Both are supposed to help me work myself into the deepest levels of relaxation.

From this point onwards, Aloysius would usually employ different techniques depending on the client's needs.

For my experience, he used a storytelling method that carried a message of freeing oneself from insecurities.

The story he shared resembled an Aesop's fable, and I was told to imagine a country where everyone walked around on crutches. The story comes to an inspiring end, with the main character I envisioned realising she could walk just as steadily without support.

However, because I didn't have anything specific in mind to be "fixed", I was stumped when Aloysius asked me to "throw away my insecurities" just like the "crutches" I didn't need.

While I tried to let myself immerse fully in the experience, at points I found my thoughts wandering to the day's uncompleted tasks, which Aloysius assured me afterward was normal.

Since there was no actual emotion to resolve, to me the session felt more akin to a meditative experience, where I "awoke" slightly groggy, but I'd say in a definitely more relaxed state.

Working with the subconscious

So how does it all work?

Our mind is largely made up of our subconscious, and images play a big part in tapping into this deep recess of information, Aloysius tells me.

"You base your recall on images and that's how your subconscious works." This means that even if you can't recall something, it's still embedded in your mind, somewhere. And that's where hypnosis comes into play.

"You can't un-know what is already known to you", said Aloysius of the key premise.

To demonstrate this, Aloysius used a series of questions to allow me to "regress" and recall what I had for lunch the day before. As someone who's notoriously forgetful, I'm honestly surprised that it actually worked. And this was even before the hypnotherapy session.

"Your short-term memory is like the RAM (random access memory) of your computer, but your subconscious, which is like the ROM (read-only memory), keeps everything," said Aloysius, who obtained his hypnotherapy certification in the UK. He is also a member of its international council of hypnotherapists.

At its core, "hypnotherapy works on deep-seated issues that people struggle with and it works with the subconscious to let it go," he added. It is also possible to do so even without putting the person into a deep trance.

In the regression therapy experienced by Kevin in Bling Empire, my question for Aloysius was whether it's possible for hypnosis to be that far-reaching.

In the show, Kevin is drawn back to when he's a foetus in his mother's womb and reduced to tears as he "senses" her emotions of fear.

While Aloysius does perform age regression therapy on clients, he shared that the furthest he has gone is to bring clients back to about age five in order to resolve past traumas that occurred during that time.

He expressed doubts if "at age zero", one would have memories or emotions imprinted. "There could be some wayang (involved)," he cheekily added.

The most common types of issues that people come to see him for though, are problems related to anxiety and depression.

"The other groups are those who need help with addictions, such as alcoholism, smoking or pornography," said Aloysius.

Some issues with addictions can be resolved within one to three sessions, while others may take longer.

"A lot of people think hypnosis is a quick fix, but if you want long-lasting treatment and intervention to help you lead a healthier life, it can take four of five sessions or up to eight, it depends on the issue," he said.

"And the good thing about the profession is that I can be coming to you in honest truth. If you are the problem, for example, I will tell it to you."

After almost a decade of experience, nothing really shocks or surprises him any more.

One of the most unusual cases Aloysius has seen, was a young woman who came to him because she had a habit of playing with her excrement.

"At first she was very reserved, she didn't want to tell me exactly what was the issue. Eventually I found out her problem was that she liked to play with her poop."

He's also had clients who were in occupations that played up their fears, including "a guy who's so afraid of germs, but his job requires him to be in contact with germs" or another one who has a fear of heights, but his job involves him being far above the ground.

And proving that time doesn't heal all wounds, Aloysius' oldest client was an 88-year-old who required "inner child healing" due to the emotional baggage he had carried with him through the years.

Criticisms of his profession no longer faze Aloysius. He has heard of people likening hypnosis to "dabbling with Satanism", an idea he brushes off.

"It's a science. If you're daydreaming on the bus, are you opening the gateway to the devil?" he questioned.

"The basis of hypnotherapy is to enable you to function to the best of your ability. Most of the time we are trapped in this shell and we need to break free, and the moment we break free, we're fine," said Aloysius, who also runs courses on hypnotherapy.

He and his team of therapists charge about $150 an hour on average, which he acknowledged is lower than the "market rate". Said Aloysius: "We're not making money to be millionaires."

"The question I often ask myself is, am I here to make money out of someone else's misery? Or am I here to help someone out of their situation so that they can be the better individuals for their family and the community?"

The economics graduate himself underwent a journey to this realisation. He picked up his certifications in psychology, counselling and hypnotherapy after a mid-career switch from his management position in the engineering sector.

"For me, I believe we've been given gifts to help others. Eventually, one will realise that the helping is more valuable than the money that you earn."