If Baey can cook, so can you!

Just like most Singaporeans who are spending this circuit breaker exercising and cooking, Member of Parliament for Tampines Baey Yam Keng proves that he's very much like us too.

When he's not dishing out workout tips on his Instagram (IG) page, Baey flexes his culinary muscles by plating up some of his mother's recipes that are easy to follow.

In his recent IG post, Baey shows the step-by-step process of how to cook chicken rice, so you can recreate the taste of his mother's cooking at home too.

Cooked chicken rice for family today. Will share how I used the chicken stock to make soup another time. #homecookedmeal #chickenrice #stayhomeforSG

The quantity of the ingredients wasn't stated, so we agak-agak (estimated) from what was seen in the video.

Only one follower asked the quintessential question: "what about the chilli?" 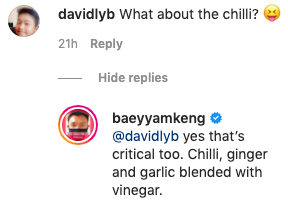 Other followers sang praises of his cooking skills and here's what humble Baey had to say. 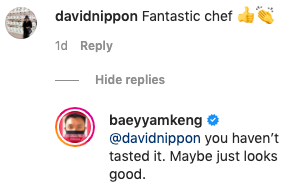 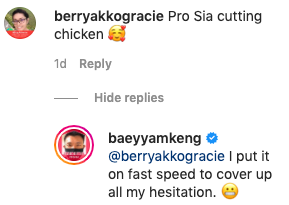 Stay tuned for his next video where he promised to share how he uses the chicken broth to make soup.

Baey also shared in another post his mother's cabbage rice recipe for those who are missing a taste of home-cooked food.

Home-cooked dinner by the family for the family. #stayhomeforSG #homecooking #mumsrecipe

Try Baey's recipes and let us know if it's Yammy!

ALSO READ: Rice cooker mac and cheese & other recipes to try at home during this circuit breaker period