Not just a flower pot: Nightclub owner Francesca Way on standing out from the big boys

To mark International Women's Day on March 8, AsiaOne will be spotlighting inspiring women from different walks of life in a series of stories released throughout the week. You can find them all here.

Only 31, Francesca Way is a young lass in a male-dominated nightlife industry.

But the multi-hyphenate, who has co-created three booming thematic nightlife venues under entertainment and lifestyle group A Phat Cat Collective in the last three years, remains unfazed even when going up against the big boys.

"During work meetings, people would only talk to my male business partners. It's like I'm just the flower pot lah, and that annoys me sometimes," muses Francesca.

The entrepreneur also recounted the time she went to a Meet-the-People session to share their plight – their night club was closed for nine months due to the pandemic.

“When I told the MP that I am a night club owner, he actually turned around and said, ‘Oh, how gutsy of you!’”

Reeling from the shock, Francesca thought that was a ‘weird thing’ to say. "Like, is it supposed to be only a male trade?

“I have never thought that I shouldn’t be in this line of work, and it has never impeded me," an exasperated Francesca revealed, "but there are just these small little gender stereotypes here and there that seeps through.”

To counter such gender stereotypes, Francesca – who has been in the nightlife industry for close to a decade – worked her ass off to prove her worth.

At 25, after three years of grit, she became Head of Marketing at CÉ LA VI. Then, at 28, she owned her first nightlife venue – 80s-inspired arcade bar and discotheque, NINETEEN80.

"It was a big validation for us because it’s the first project that we, as first-time business owners, have done together,” Francesca shared.

“We were up against the likes of Zouk Singapore, 1-Altitude, and Manhattan – which is freaking backed by Regent hotel! We were the only small fry (among them), and to know that we were on par with these people, that made me real proud.”

Being the go-getter that she is, Francesca’s biggest personal achievement was inspiring her younger sister, Maxine, to become like her.

Another go-getter, that is.

“My sister, like me, also did a completely different degree (business and psychology) compared to what she is doing now, which is culinary,” Francesca shared, who graduated with economics and finance degree when she was 21.

Francesca passed her sister a contact she had from Les Amis, Maxine (sceptically) went for an interview, then an internship, and the rest, they say, is history.

“I’m really proud (of Maxine’s achievements) because I feel like I opened up her perspective to dream bigger!"

Francesca, the eldest of three at home, has always been chummy with her family – especially with her mum Gerardine Pinto, who is one of her biggest role models.

In the late 1990s, Gerardine founded a successful French creperie along Duxton Road despite having zero professional F&B experience.

With her entrepreneur mum as an example, Francesca grew up with the mindset that she could go after anything she sets her mind to – despite being a woman.

“Growing up, I knew that I would eventually want to run my own business. When I was a kid, I wanted to open my own ice cream parlour!

“My mum inspired me to go for my own thing. It was from then that I knew I wanted to be an F&B entrepreneur, although it kind of manifested more towards the nightlife side (of things),” Francesca shared, who believes that, “if I can dream it, I can do it.”

While reopening a French creperie with her mum is not in the cards for Francesca – who “doesn’t have the connection to France the way she (Gerardine) does,” – a Peranakan diner could be their next project.

“She cooks very, very good Peranakan food, so during the lockdown period, we started a fun project selling her dishes on Instagram, and it was always sold out!” Francesca shared, complimenting her Kristang (Portuguese-Eurasian) mum.

Francesca, who confesses to be the ‘eater’ of the family, also lets us in that they might continue it in a restaurant format, “but I’d have to see if my mum can manage because she’s already kind of retired.”

Peranakan project aside, the #girlboss’ goal is actually world domination. She said: “We want to bring our creativity overseas, to the rest of the world.

“Before Covid hit us, we were supposed to expand NINETEEN80 overseas once we got Rails up and running. 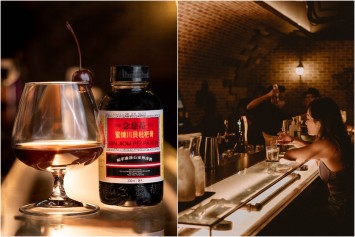 “The whole 80s concept is something that people can relate to very easily, and we believe that people would love it as much as we do,” the serial entrepreneur shared, adding that they were actually looking to first extend their reach to Bali and Melbourne.

While world domination plans are put on hold, Francesca is still hustling and bustling – having Zoom meetings the moment she wakes up, finding new business avenues to sustain revenue, doing alcohol delivery, and more.

“As an entrepreneur, you have to be open to whatever that comes your way.”

Being an entrepreneur remains tough work, even more so as a female entrepreneur in a male-dominated industry.

“Contribute to the conversation! Only then people will start to realise that, ‘Hey, she has something to say!’ Have the confidence to put your work out!

“When you see what was in your mind a few years ago come to life, and a whole team that lives and breathes the same dreams, it makes it all worth it.

“That’s the best part. That’s priceless,” she tells us with a satisfied smile.