If you watch the recent Mediacorp show, A Quest to Heal, whenever you see a scene of actress Carrie Wong's character flying in the air and spinning around, it may not be the actress herself you are seeing on screen.

Instead, the person you are looking at might be stunt actress Grace Teo.

The 28-year-old is one of the few females in the local media scene who stands in for actresses (and sometimes actors) when there's a scene that requires physical skills. 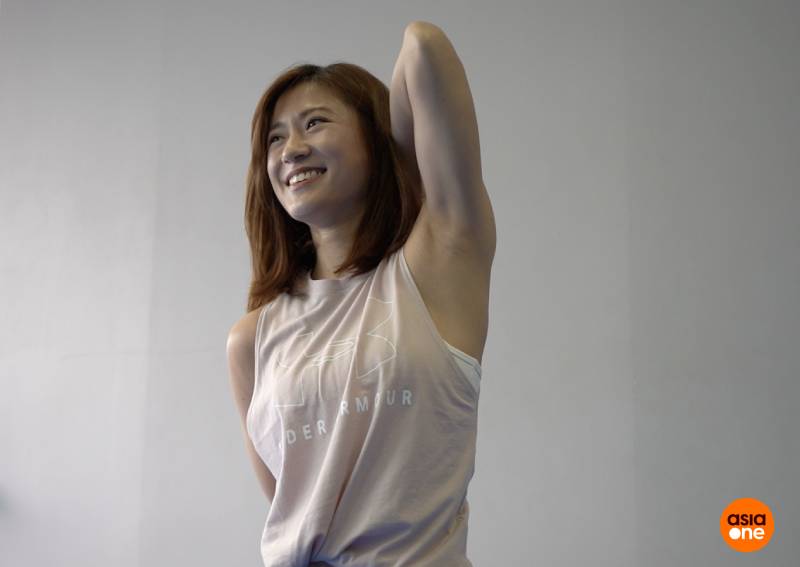 Stretching is a must before any stunt sequence PHOTO: AsiaOne

And you would never have guessed that she engages in such physical activity on a regular basis. Rolling, falling, being slammed against the wall, and breaking tables as she falls are all in the day's work for her on set.

Growing up, Grace never thought that flying around in a harness would be part of her job. 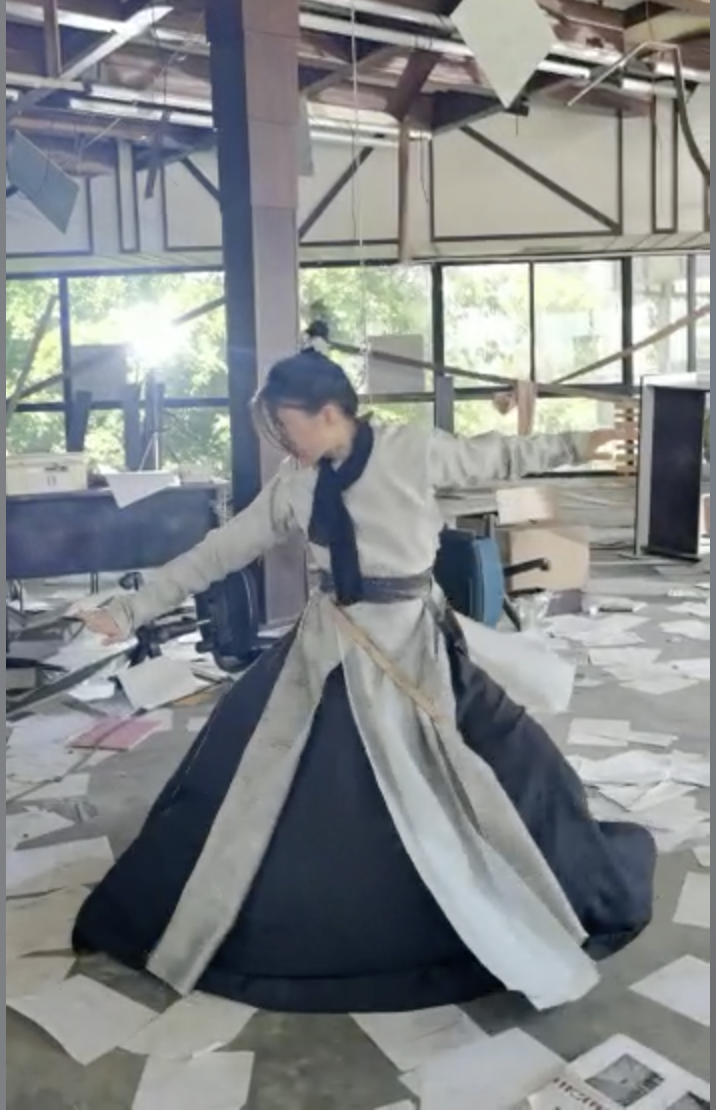 Grace in MediaCorp show, A Quest To Heal PHOTO: Provided by Grace Teo

She did, however, have dreams of being an actress, and this was how she ended up in the Lasalle College of the Arts. It was here that she was exposed to stunt work during one of her course modules.

Her Wushu and Aikido training from her younger days helped her pick up doing stunts fast. "I thought, wow, this is very cool, so I thought I might as well just have fun with it."

Little did she know that this would open the doors to the career she is pursuing today.

Starting out in stunts

Her official induction into the production happened by chance though. One of her classmates was acting alongside actor Sunny Pang, who is the founder of the stunt team, Ronin Action Group, and mentioned that he knew a girl who could do stunts. "I had a meeting with Sunny and that was the start of it all," she shared.

A few months after joining the group for their training sessions in 2015, she got her first paying job in the movie Siew Lup by Sam Loh.

It wasn't to show off her fighting skills though. "I was a stunt double who needed to know how to get 'abused', fall safely and get thrown on a table," said Grace. "For a day's work, the pay was not that bad. Definitely higher than what newbie actors would get."

Most local productions in Singapore don't require stunts that are too extreme. And for her group, they usually let her know which stunts a job would require before she agrees to it. "Sunny will ask, this one requires body slamming. Are you okay with it?" 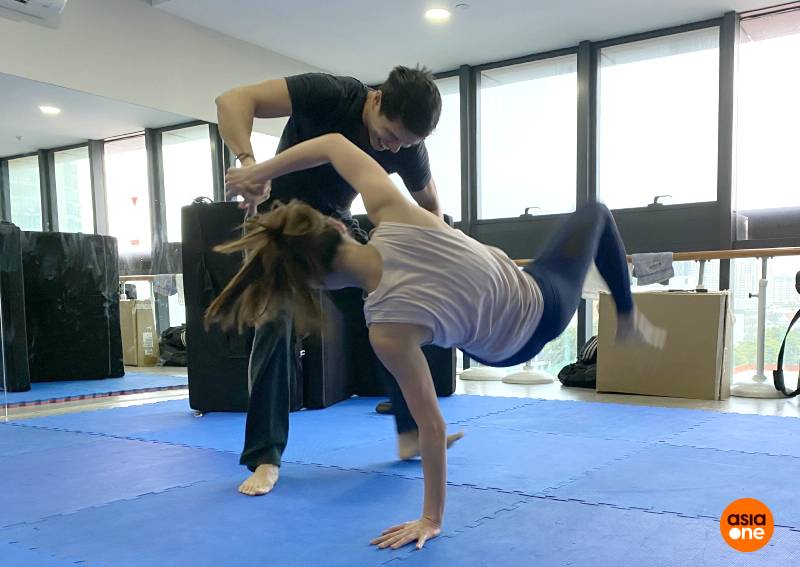 Her job is not without its own hazards though. Once, while doing a rehearsal for a stunt, Grace was slammed against a wall and suffered from whiplash. She had to be taken to the hospital immediately.

It took her six months to fully recover and the spunky stunt actress headed right back into stunt work.

I'm not that fearless

When people hear that she does stunts, they assume that she's very chor lor (uncouth) and is not afraid of anything. "I'm quite scared of cockroaches," Grace quipped. Heights is another fear that she has, rather ironic for a stuntwoman. But as it's part and parcel of the job, she takes it on like a professional.

And when she takes on jobs with other groups, she doesn't always fully know what the stunt will involve, and one time it required her to jump off a four-storey building (with a harness, of course).

"The first try was really a leap of faith, but subsequently, once I got the hang of it, I thought, actually it's quite safe, and then it became something fun to do." That said, she will still hesitate to do it again. 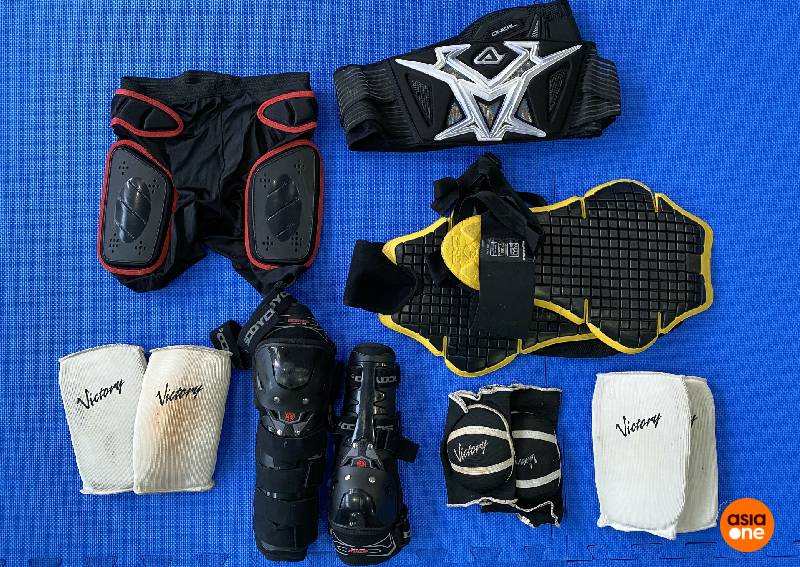 Some of the protective equipment used while performing stunts PHOTO: AsiaOne

Other stunts that are a no go for her, are rolling down the stairs, as she has a lower back injury, as well as car stunts, especially those that might have direct contact with a car. Though there is protective gear provided and safety precautions taken with every stunt, she'll rather not take the risk.

Not all stunts are that physical though, and it can be as simple as falling on your back. But doing that takes skills and it's not as safe as one may think. "Doing these [moves] can actually break your bones. Knowing how to fall safely is very important."

When her group meets, they do a variety of training, everything from knife work and gun handling to fight scene choreography and how to be thrown about.

Interestingly, though people may think that those doing stunts need to be physically fit, Grace debunks that immediately. "You see stunt people with bellies as well, but they are skilled in their moves," she shared, citing Sammo Hung as an example of an actor who does stunts and fight scenes skilfully, something you may not have guessed if you just judged him based on his appearance.

The actress that she looks up to is fellow Malaysian Michelle Yeoh. "She's a good example of a good actress who is able to do her own stunts, which is very admirable."

Her dream to meet the actress came true a few years ago, thanks to a friend. She recalls being absolutely star-struck but she "still managed to utter out a question". 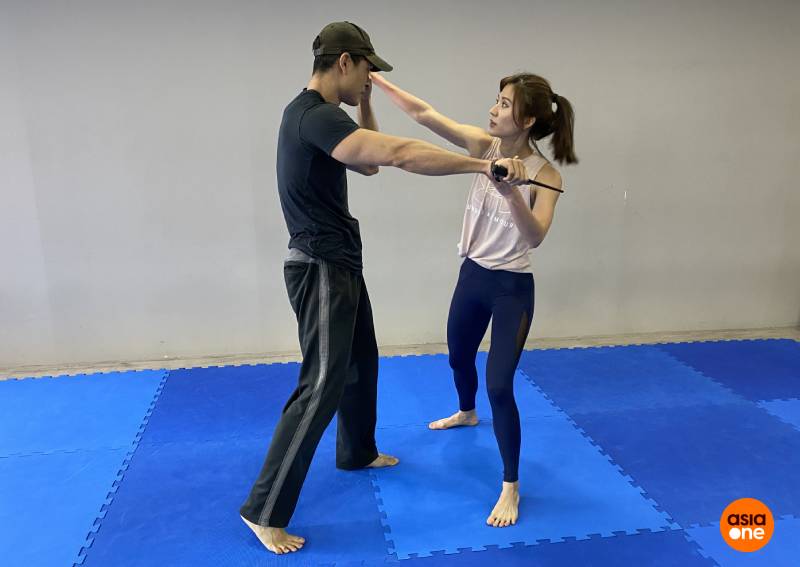 For now, Grace's calling card of being an actress who can also do stunts has helped her carve a niche in the industry and clinched her acting jobs. "They know that I have an acting background and my selling point is that I can fight. For one of the roles, I was cast as an MMA fighter. As it was rather heavy in stunts, they took it as one of their considerations, and I got the job."

She does want to expand her acting portfolio though and had the chance to do it recently. "When they called, they said, 'Grace, I know you fight, but are you okay to act in a different type of role?' I said yes immediately. It was great to try something different and I hope I get more chances."

As stunt jobs don't come by every day, Grace does hold a full-time job to pay the rent and her boss allows her to take on acting and stunt jobs whenever they come her way.

This is the case of most stunt performers as the income from stunts alone is insufficient and unsustainable, not to mention the high risk it carries.

She does have a role that she's looking forward to — she's been cast in Ranjeet Marwa's upcoming flick, Blood Rush. Her Ronin Action Group boss Sunny set up a meeting with the director, and thereafter, a role was written into the script just for her, something she's very grateful for.

However, thanks to the Covid-19 pandemic, filming that was supposed to start in June has been pushed back to next year.

For those who aspire to perhaps be the next big action star in Asia, she advises first picking up a martial art and watch action shows. Joining one of the stunt groups is also another route to learning how to do stunts. "We hold workshops and join us for one of those. And from there, if you are ready, you could become one of us."

#why I do what I do #jobs #actress