Singapore hospital warns against eating hotpot more than once a month, seafood and chicken broths among least healthy

It's T-minus three days before we herald in red packets, prosperous wishes and everything else that's associated with Chinese New Year.

And of course, that includes the quintessential hotpot.

The endless, endless, hotpot that comes hand in hand with the visiting we've got lined up.

Don't get me wrong, I absolutely love hotpot. In fact, I held onto my self-proclaimed title as a hotpot connoisseur for the longest time until a colleague kicked me off the throne when she revealed that she would indulge in a hotpot session every week.

But perhaps being less indulgent is for the better, considering how the boiling pot of joy isn't exactly the healthiest thing around, surprisingly.

According to Singapore's Mount Alvernia Hospital, we shouldn't even be eating it more than "once or twice a month", especially if we tend to make poor choices with regard to the soup and ingredients.

In a Facebook post last Friday (Jan 17), the hospital shared an infographic detailing just how much sodium there is in our favourite broths.

For reference, one's recommended daily allowance of salt is about 2,000mg a day.

Among the seven broths listed, spicy hotpot broth has the least amount with 2,800mg worth of sodium per 100ml, while Bak Kut Teh broths had a horrifying 12,800mg of salt per 100ml. That's more than six times the daily sodium limit.

Spicy broths like ma la can be high in saturated fat as well due to the layer of oil, and broths like laksa would contain coconut milk.

To make matters worse, our choice of ingredients tend to be calorie-laden too.

Processed food such as fishballs, meatballs, luncheon meat and sausages are some of the worst offenders on the table.

Popular cuts of meat such as pork belly and offal aren't that much healthier either. Just consuming 50g of pork belly (about three slices, by estimation) will set you back by 230 calories and 20g of fat, roughly the same as if you were to eat a curry puff, the hospital shared.

Although hotpot is almost inextricably tied to the new year celebrations, fret not. There are still plenty of ways to make your meal easier on your body, according to the hospital and padded with some research on our end.

One can simply do the following:

Choose clear or light-flavoured broths, but don't drink the soup if you can. As tempting as it is to guzzle down the sweet, delectable broth, the infographic is a glaring reminder of just how much our heart health is at risk. 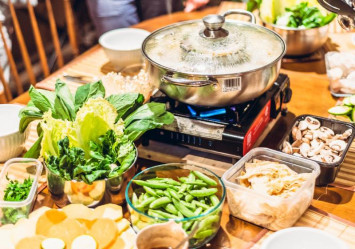 Begin with vegetables, and choose lean meat such as fish and chicken. By tackling the greens before the meat, the soup is less fatty and the vegetables absorb less oil compared to if you were to toss them in at the end.

Don't skip the carbs. Sure, it sounds counterproductive, but if you're looking to reduce the amount of unhealthy hotpot ingredients consumed during the meal, this is the way to do it. Just make sure to avoid instant noodles and opt for healthier carbs such as brown rice and sweet potato noodles, or low-carb options like konjac noodles.

Last but not least, go easy on the sauce. Rather than slathering your food in calorie-rich and fatty sauces such as sesame and/or peanut sauce, why not opt for more natural flavours? Minced garlic, spring onions, soy sauce and vinegar help to lift the flavours of your meal. For an extra kick, you can always toss in some chilli padi too.

Happy feasting this new year, everyone!