The single parent's guide to buying a BTO in Singapore 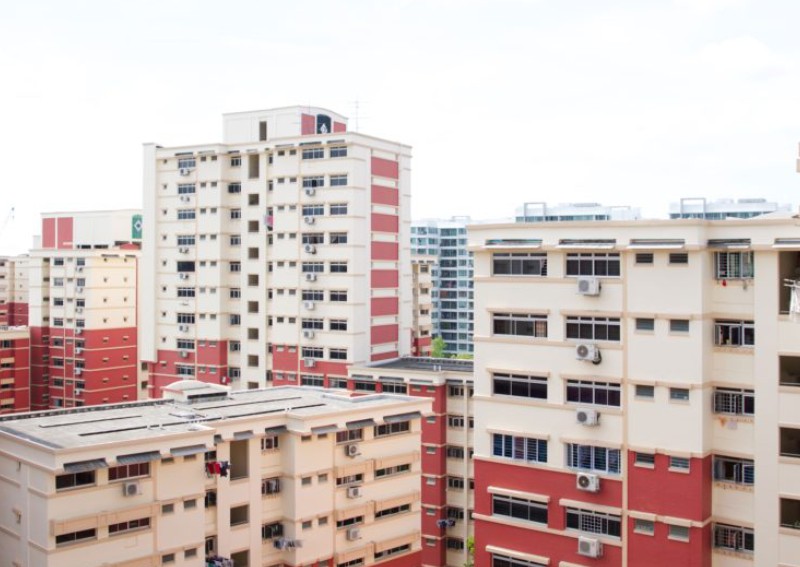 For the majority of Singaporeans (me included), we are blessed with a safe space to call our home where we can unwind after a long day.

Our basic right to space is something that we often take for granted, but it is not a given for Singapore's more vulnerable groups.

Groups like single parents (including the divorced, widowed, and unwed) in Singapore often fall through the cracks.

They are unable to secure more permanent housing due to the Singapore government's stance on what constitutes a family unit.

But thankfully, things are a-changing as Singapore progresses to become a more inclusive society for single parents.

Prior to the announcement, unwed parents and single parents will have to be 35 and above before they can apply to buy a 2-Room Flexi Build to Order (BTO) flat in a non-mature estate.

And they can only do so through the Singles Singapore Citizen scheme or the Joint Singles Scheme (as a co-applicant).

Alternatively, they can buy resale flats from the open market.

Under the new legislation, the Housing and Development Board (HDB) has lowered the age requirement and made more flat options available to unwed single parents.

Unwed single parents over the age of 21 will now be able to buy a 3-Room BTO flat in a non-mature estate.

Looking to buy a BTO HDB flat under this new legislation?

We got you covered.

TL;DR: The single parent's guide to buying a BTO in Singapore 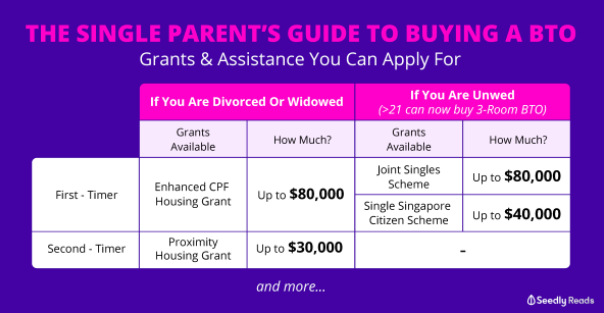 Changes to the Rebalance of Flats Exercise

3. Other support for single parents

Scraping of the Re-Offer of Balance Flats (ROF) Exercises

Prior to the announcement, unsold BTO flats from BTO launches will be offered during the Sale of Balance Flats (SBF) exercise for balloting.

If there are any unsold flats after the SBF exercise, these will be made available during the Re-Offer of Balance Flats (ROF) exercise.

And if there are still any more flats available after the ROF, these will be made available for Open Booking.

Note: Each round of balloting can take up to four months.

What's the latest change to ROF?

Under the new legislation, HDB will be scraping the ROF exercises.

Any unsold flats from the SBF exercises will be made available for Open Booking immediately.

This means that unwed single parents can get faster access to HDB flats.

According to HDB's Eligibility Schemes for buying flats, single parents who are divorced or windowed can form a family nucleus and buy a BTO or resale flat (with subsidies) under the Public Scheme.

HDB considers a family nucleus as:

If you share the care and control of your children (who are under 21) with your ex-partner, you will need to get a written agreement from him or her to list your children in your flat application.

Your family nucleus will be able to qualify for the revamped Enhanced CPF Housing Grant (EHG) if you are applying as a first-timer. 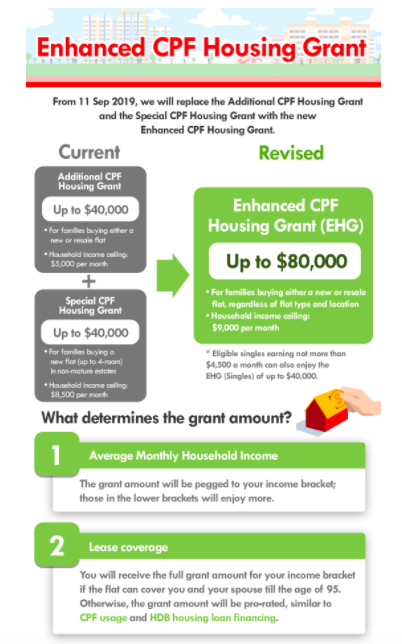 However, if you are not buying an HDB flat for the first time, you can still qualify for the Proximity Housing Grant (PHG) which gives up to $30,000 for you to purchase a resale flat.

HDB has also set up the Assistance Scheme for Second-Timers (ASSIST), where 2- and 3-Room BTO flats in non-mature estates are set aside for divorced or widowed single parents with children (below 16 years old).

Unwed Single parents over the age of 21 will now be able to buy a larger three-room BTO flat in a non-mature estate.

Unwed single parents may be eligible for the singles grant of up to $80,000 under these schemes.

*Do note that grants are subsidies are subject to prevailing eligibility conditions at the time of application by HDB.

Other assistance and support for single parents during the application process 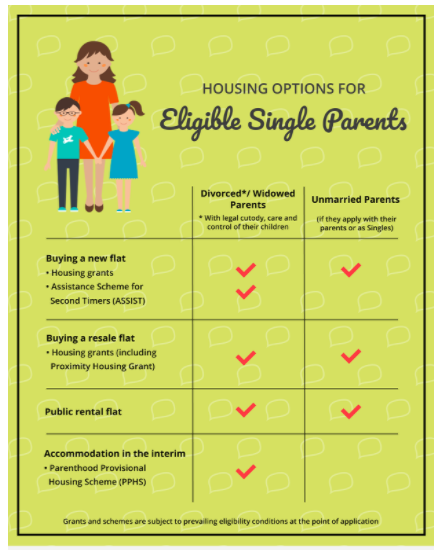 While waiting for the application of your BTO flat, you can apply for temporary housing options under the Parenthood Provisional Housing Scheme (PPHS).

Also, you can apply for public rental flats from HDB while waiting or if the above-mentioned options are out of your budget.

Do note that if you earn more than $15,000 monthly, you will not be able to apply for a rental flat.

The S.H.E. project for single mothers in Singapore

For low-income families headed by single mothers in Singapore, the Association of Women for Action and Research (A.W.A.R.E.) provides additional support with the Support Housing and Enablement Project. 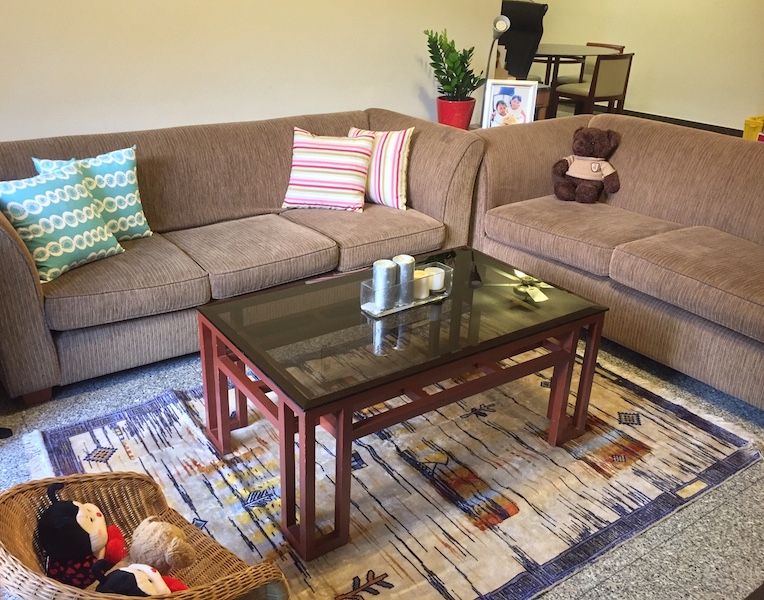 The project is a research-based programme that provides temporary stable and good housing with transformational support for them.

Unlike most transitional housing programmes that house their clients for three to six months, Project S.H.E. houses them for up to 2 years.

Providing a stable home for Singaporean children to grow up in

Overall, it appears these measures are geared towards providing a stable home environment for Singapore's future generations to grow up in.

We welcome these measures that the government has taken to make Singapore a more inclusive society.

And it's particularly meaningful for single parents and their children as it gives them the basic rights of a safe space to grow up in.