Ask any Singaporean man-on-the-street if chicken rice is made with teriyaki or hoisin sauce, and you're bound to get incredulous looks.

But one could probably forgive Crystal Palace footballers Jake O'Brien and Scott Banks for providing those answers when they were asked to name the ingredients in some of Singapore's most iconic dishes.

The athletes were in town for the Standard Chartered Singapore Trophy friendly match played on July 15 against Liverpool, where they lost 0-2.

While they may have lost the match on the pitch, the players had a chance to redeem themselves in a video challenge titled Singapore Side Dish Shoot-out, where the pair had to accurately guess the ingredients in two Singaporean dishes, in order to win. Seems easy enough, right? Well, not quite.

The video challenge was recorded at JW Marriott and posted to the football club's YouTube channel last Saturday (July 16).

For the first dish of chicken rice, the pair had no problems naming chicken, rice, and the garnish of cucumbers among the ingredients.

Irish defender Jake, 21, scored a point for calling out soya sauce among the ingredients while Scottish forward Scott, 20, was congratulated for correctly identifying ginger.

With the easy ingredients out of the way, Jake appeared to be at a loss. He made a tentative pitch for "salt" as his next answer, to Banks' chagrin.

"No way that counts," he exclaimed. Unfortunately, it did.

And it simply went downhill from there, as the players struggled to identify the condiment of dark soya sauce.

"Hoisin sauce?" Jake proffered. "Teriyaki sauce?" countered Banks. Nope, and big nope. One also had to wonder how they missed out on naming chilli as one of the pivotal key ingredients.

The winner for the first round went to Scott.

Then came the second challenge — which featured a decidedly atas laksa using lobster instead of prawns, and with the laksa paste made from scratch by the JW Marriott culinary team.

This dish got the thumbs up from Scott, who could be seen happily slurping up the gravy by the spoonfuls.

"It's really nice but I could not tell you what's in it," laughed Scott. 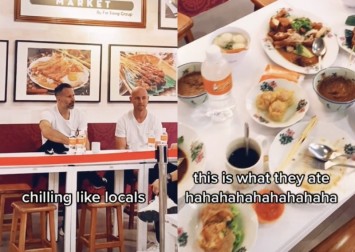 The ingredients seemed to roll off their tongues this time around, with Scott easily identifying lobster as the main protein.

When it got down to the final ingredients, however, Jake leaned on "salt" once again, but was rejected.

And while he did identify "milk" as one of the ingredients, when asked to define what type of milk it was, Jake stumbled, choosing soya milk instead of coconut milk.

With three strikes against Jake, Scott emerged the winner once again, correctly identifying tofu (or rather, tau pok) and beansprouts in the dish.

The penalty for losing? "Jake can buy you lunch," suggested the host.

However, he warned the pair that the "exchange rate is not good", informing them that "it costs 10 pounds (S$16.73) for a pint of beer", to an audible gasp from Scott.