Exchanging their vows in front of two computer screens and a blue backdrop was not how Jeremy Gan and Lim Ding Yi had envisioned their wedding to be like. Yet today (May 20), this was the setting as the pair made their union official.

The two were amongst the first to have their solemnisation done via video link in Singapore after Parliament passed the Bill on May 5. Their solemnisation took place in the morning in their new flat and was conducted over Webex.

They were advised to keep the ceremony small, as sensitive information, such as identification cards, would be shown over the camera. Hence, only family members were part of the Webex call.

To allow more friends and family to participate in the festivities, the duo also set up a second computer with a Zoom call while the ceremony took place, with about 60 people turning up. "It was more than we had expected, especially since we only sent out the Zoom invite the day before at midnight," said 28-year-old Gan.

The entire ceremony took 45 minutes, with the initial 10 to 15 minutes spent sorting out technical difficulties, according to the analyst. "But after that, everything was smooth sailing and we could all hear one another clearly throughout the ceremony."

A few days notice and a haircut the night before

Lim shared that as they had been only given their solemnisation date and timing on May 15, it was a rush for them to prepare for the ceremony.

The couple had been staying apart in their respective family homes since the start of the circuit breaker. Yesterday evening, after they completed their work, was the first time they had seen one another in person since April.

And yes, they had checked to ensure that they weren't breaking any rules. "We were told we can move to a new home, but once we do so, we can't visit our families anymore to minimise cross-infection," shared the 26-year-old programme executive.

They spent the night tidying up their marital home and preparing for their wedding today. One of the more unique things they did — the bride-to-be cut her groom's hair.

It was Lim's first time handling hair ever but "I think I can pass," she said of her results. 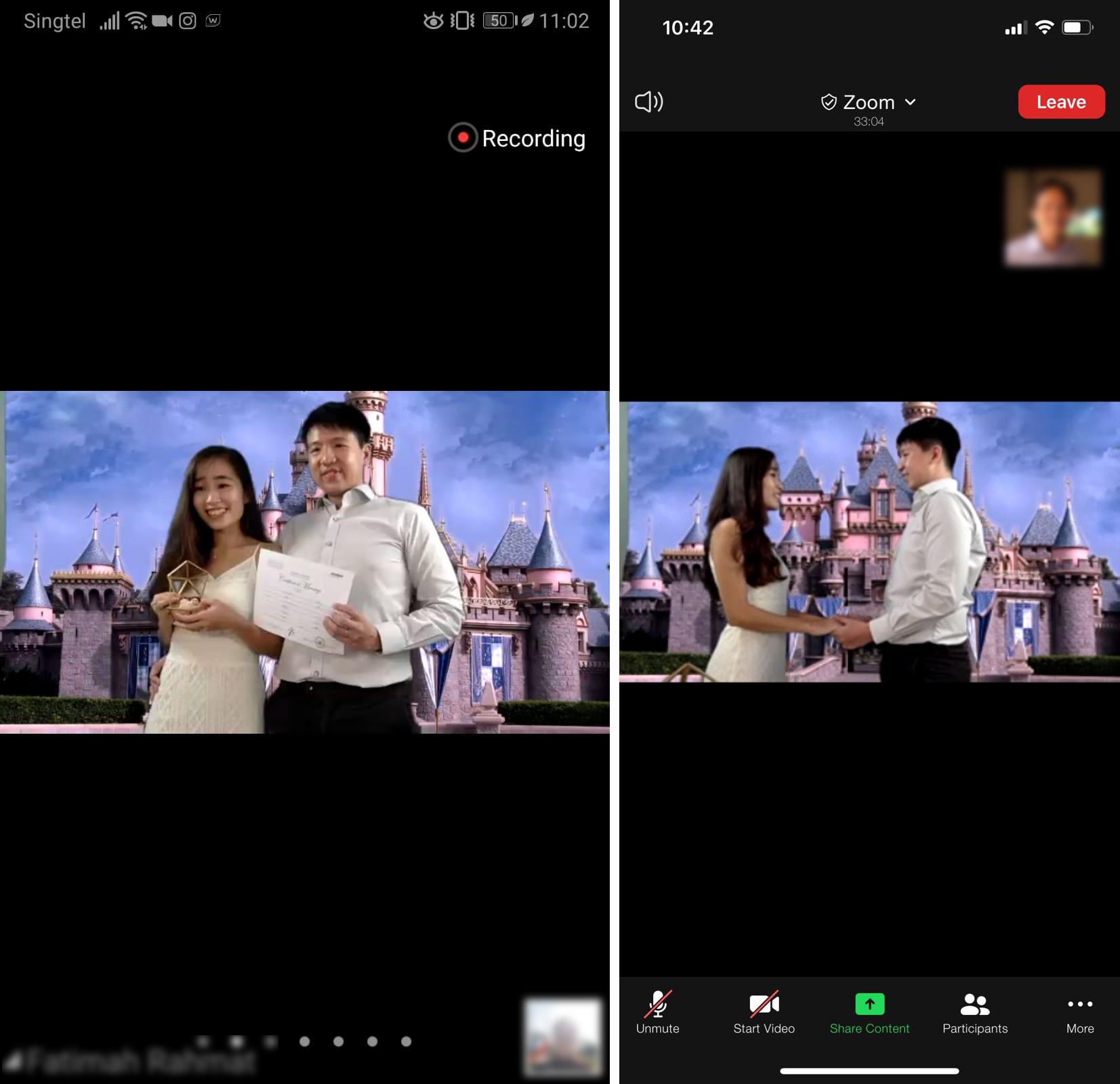 The couple's adventurous spirit explains why they decided to go ahead with a virtual solemnisation as they were game to try something new. And they tried their best to give their special day a unique touch with the blue screen set-up that they borrowed from a friend.

"For Zoom guests, they got to see us exchange our vows in front of a castle backdrop," said Lim. The castle is of significance to them as the proposal took place at Hong Kong Disneyland and they were supposed to visit Disneyland in the US for their honeymoon.

The pair had initially planned to have their wedding solemnisation and banquet on May 8 and had made their booking nearly a year in advance.

However in February, when the Covid-19 situation started to worsen, they started making changes to their initial plans. "The rules kept changing every few days, with the number of guests allowed constantly reducing," said Gan.

Despite everything, they held out hope that their May 8 date could still go ahead with a small ceremony. That is until the extension of the circuit breaker to June 1. 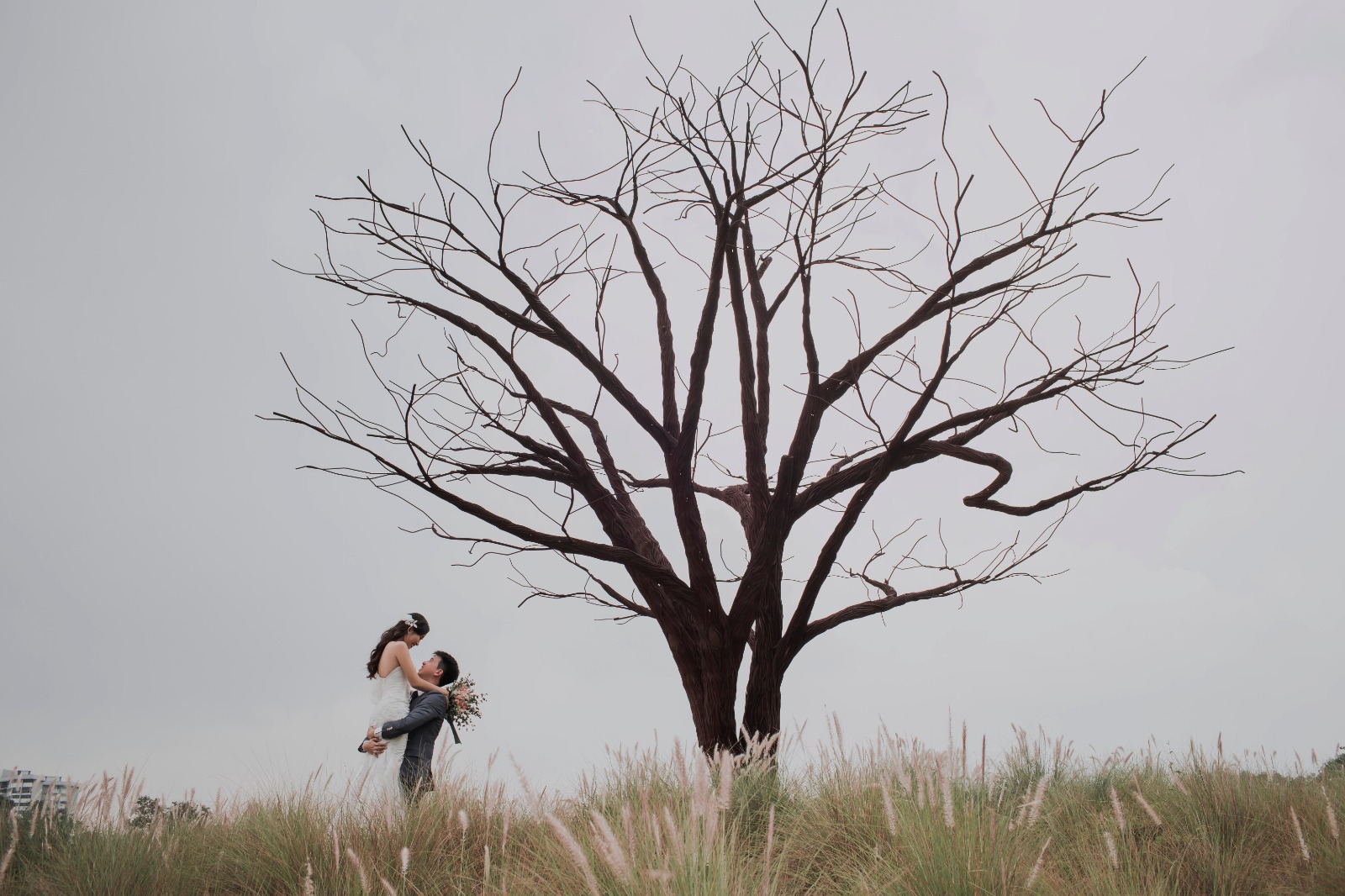 They added that officers from ROM and the Ministry of Social and Family Development (MSF), as well as their Justice of Peace, were very helpful with running through what to expect and how to best prepare for the ceremony. "They suggested decorating the place a bit, which we did and are glad we took their advice," said Lim.

Though it was announced yesterday that physical solemnisations would likely be allowed after June 1, the pair has no regrets going ahead with their virtual ceremony.

Sharing that they were usually game for new experiences, Lim said: "It was a new and novel method to get married and we didn't lose out as our friends and family were able to witness it. In fact, my parents were very supportive and excited that we were getting married on a virtual platform."

Said Gan: "With the current situation, we were tired of having things constantly change and decided, 'just give us a date and we'll make it the best day ever for us to get married.'"