Post-renovation, this XL-sized HDB flat became the ideal Japanese-style home (and weekend spot) for a family of four.

With its emphasis on everyday simplicity and functionality, Japanese retailer MUJI is pretty much synonymous with contemporary minimalism in the eyes of its supporters - and it's the reason why homeowner Pei Sze (who, naturally, is a fan) chose to base the new look of her jumbo flat on the brand's aesthetic.

"My husband and I love travelling to Japan, and also the look of Japanese homes. That's why I like MUJI," shares the mother of two.

"I like how it focuses on things like simplicity and practicality, but it also has this cosy vibe - because of that I wanted to bring the look back to my home."

This dream was eventually fulfilled when Pei Sze enlisted the help of D5 Studio Image designer Sharon who helped turn a lived-in Ang Mo Kio jumbo flat, which comprises of two conjoined units, into the spacious family home that it is today.

Here's how the transformation took place.

ON THE ORIGINAL LOOK OF HER HOME

Pei Sze (PS): I think the house is about 40 years old, so we had to re-do everything, from the flooring, to the windows, to the electrical wiring. We also made some big changes to the rooms.

Like for example, we hacked away some of the walls and widened the walkway that joins the two units.

ABOUT HER HOME'S NEW LOOK

PS: The theme of the house is Japanese minimalism and it's inspired by the MUJI brand.

My husband and I wanted a cleaner appearance because our previous home was done up in the Zakka-style, which looks messier even though it's a Japanese design style too.

I like how the house is an open and airy space with plenty of daylight and because of that it's a great place for us to hang out with our children during the weekends.

ON CHANGES MADE TO HER HOME

There was quite a bit of work done for the entryway.

Originally, there were two main doors; one is where the current entrance is and the other is where the green wall is. We sealed the doorway up before installing a bicycle rack in front of it.

The entryway's floor came with tiles, but we re-did it so that it would match the stretch of concrete screed in the living area.

We initially planned to cover the entire area with the same graphic tiles used for the stairs, but it would have looked too messy.

Furniture-wise, we kept things simple in the living room - just a custom-built TV console that has a stand for our Sonos speaker and a small, movable sofa, so that there would be enough room for our daughter and son to play around.

The Japanese-style platform was specially customised for our needs.

We wanted it to be more than just a usual cosy corner so our designer, Sharon, made sure that it came with storage solutions.

There are also a pair of tables that can be kept inside the platform. 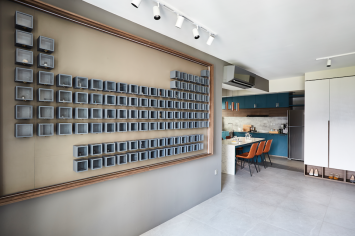 The dining area used to be a bedroom and when the walls were hacked away Sharon discovered that there was a pillar there. So, she had her people wrap it up and turn the space into another cosy corner.

Even though it looks like a built-in, the dining table isn't fixed in place.

There are wheels below and we can shift the table out so that the dining area becomes a kids corner, but usually we park it near the cosy corner's bench where we sit down for our meals or family gatherings.

Previously, there were four toilets in the house, that was too much for us, so we ended up asking Sharon to convert one of them into a laundry/storeroom.

I like the panelled design of the wood walls because it hides the door really well - when it's closed you can't tell it's there.

One big difference in the kitchen is the flooring, we chose marble-look homogeneous tiles instead of vinyl because they are a better fit for a cooking area.

And then for the backsplash, we saw something similar in D5 Studio's portfolio and we liked it immediately because of the black grout.

Sharon told us that the grouts have to be of a certain width for them to stand out, so the tiler probably had a hard time installing them for the kitchen and the laundry area outside.

Our requests for the kids bedroom were pretty simple, the only things we asked for were a platform bed for storage purposes and a small desk.

We also wanted magnetic boards installed, which is what the white panels on the cabinet doors are.

Before the renovation, the master bedroom was smaller than what it is now; we needed the space for the wardrobes and our son's crib.

The room was expanded by demolishing a storeroom, which used to be where the wardrobes are, and moving the bedroom entrance outwards into the passageway.

The bed and flip-up vanity/work desk were specially customised for our storage needs.

There are drawers below the bed and we purposely left a small gap in the base so that it looks as though the mattress is floating.

ON WORKING WITH D5 STUDIO IMAGE

Working with Sharon was really fun.

From the start, she would give us ideas on what to shop for, and she managed to make the entire process feel engaging by constantly giving us fresh inspiration throughout the three months it took to complete the renovation.

I feel that this home is a great place for my kids to grow up in, it's tidy, spacious and comfortable!

When we ask her if she wants to go out during the weekends, she would tell us that she prefers staying home - and as parents it really makes us happy that we are able to give her a place that she loves so much.