Given that we basically live on an island, it's interesting that we don't see as many coastal-inspired designed homes in Singapore.

And even though a coastal home design is not as popular here, it has actually been around for a long time. It may not have been as clear a label back then, but these designs were common with traditional homes situated near the coast.

While there may be variations, such as darker or lighter wood stains, the essence remains the same.

Any home with a coastal design exudes an atmosphere of serenity and fun. It's the same feeling you'd get when you're staying at a holiday home near a beach or lake.

For Mareenah (@mareenah) and her husband, they always had a soft spot for the coast. "Some of the fondest memories are of family holidays in Australia and our honeymoon spent at the beach in the Maldives," she recalled, "and there's no denying that those times had a big impact on our inspiration for our dream home."

She added that even way back then, she remembered looking at all the big, white coast homes, thinking they were simply alluring.

Her home is a resale HDB located in Pasir Ris and is just a block away from her parent's place. 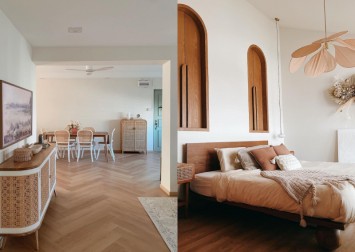 "We've always wanted to stay near them, but the units listed in the area are hard to get due to the racial quota," she said.

"So the moment this house was listed by a Malay seller, we did not hesitate to purchase it."

They were on the lookout for a well-used property with an existing open concept layout. While the couple wanted to revamp everything in the home that they'll purchase, they also wanted to save on the hacking costs.

She said that her unit was a perfect fit in all of their criteria, and it was love at first sight.

Currently, their home is occupied by her little family, which includes Mareenah, her husband, and their son. Let's discover the renovation journey they went through and how their coastal-themed home unfolded.

Mareenah and her husband were going for a simple renovation with minimal built-ins, so they only set their initial budget to $45,000. However, they ended up setting aside more as they predicted that costs could escalate.

"True enough, due to electrical wiring, mosaic tiling, and local carpentry sources during a period when manpower was limited, the renovation totalled close to $60,000," she said.

"And this doesn't even include the costs of appliances and furnishing."

The couple was looking for a perfect balance between modern and coastal. They decided to play around with pure, clean tones since it's easier for them to add a touch of colour whenever they feel like sprucing things up.

Soft curves are also prominent in their design as it helps soften up the space.

"Plus, it's a lot safer for our little one to run around," she added.

She admitted that they love arches but didn't wish to go overboard with them. Thus, they placed them in areas where they felt like there were too many right angles.

"A home meant for rest was what we wanted to achieve, so we had elements like rattan to make us feel like we're in a tropical retreat."

And while an open concept layout was on top of their list of priorities, they also wanted to preserve the home's original layout as much as possible. This would also help them save on the hacking cost.

Mareenah said that it was a dream factor for them to have the rooms clustered in a corner. As such, they had their master bedroom extend outwards to make room for an L-shaped wardrobe.

This setup will also allow the room doors to face one another when the corners are cropped.

Let's have a visual tour of how their coastal-themed home turned out.

Because they wanted to accommodate the open concept layout, the couple had to ensure that the shared spaces flowed seamlessly.

They had a choice to conceal the previously hacked wall in the entryway completely, but they built a half wall with an arch shelving instead.

"This helps make both the living space and entryway more breathable," said Mareenah.

So that the living room space could be functional as a conversation area, they moved the TV area to a less conventional spot.

Mareenah said that many guests tend to question their TV's location since it camouflages as a frame.

"We wanted to make it look more like a passing art over a sideboard." Thus, they installed the TV at a distance further away from the sofa.

With the large carpet, plush sofa, and comfy cushions – the living room is a really cosy spot to be in.

For the dining room, the couple wanted to preserve as much false ceiling as possible.

So Mareenah said they cropped the previous odd-shaped ceiling design to a box-shaped one. They also replaced the pendant light for a ceiling fan to make it more functional.

They chose the wooden flooring to be set in a herringbone design, which works well with the rattan wood furnishings.

It all comes together nicely to create the fun and peaceful vibe common in coastal-styled homes.

They were able to create a clear division between the kitchen and dining area with a curved kitchen peninsula, which also adds more usability to the space.

Since they opted for open shelving for the upper half of the kitchen wall, they had more closed cabinets created at the bottom half to compensate for the lack of storage space.

They also had to extend the kitchen area since they needed to allocate a corner for the laundry space. The attention to detail here is also noticeable, with the appropriately-themed tiles as part of the backsplash.

The couple wanted to make space for an L-shaped wardrobe, so they had to extend the master bedroom into the original living space.

We can't help but notice the irregularly yet flowing shape of the window, which is reminiscent of how water flows.

The room had an odd-shaped beam, so they used an arch partition to hide it. Plus, it ensured the home had sufficient space in case they needed a cot should they expand their family someday.

Their son's bedroom is filled with lively colours in contrast to the calm setup of their master bedroom. But even so, they made sure that the theme for the half-wall remained to have a joyful coastal vibe.

We love how vibrant the colours are, and just how neatly the toys are packed in different brightly-coloured crates.

For the common bedroom, Mareenah chose the Hemnes dresser and matching daybed from Ikea. It's simple yet matches well with the theme of the home.

And it's not just about the looks too – you can transform it into a double bed for when guests come over.

The room also had space at the foot of it for a well-sized study table. Like the rest of the home, the finishing styling pieces chosen are impeccable.

While they redid both bathrooms, they decided not to make any changes to the plumbing layout.

One of their bathrooms has a warm tone with terrazzo tiles.

The other bathroom is on the cooler side with its marble-look alike tiles.

Mareenah stated that the final outcome is similar to what they envisioned during the planning phase.

Even though the pandemic is known for its negative impact on most renovation projects, it was actually a boon for this couple.

"Due to the delays caused by the Covid situation then, the handover of keys only happened almost a year later.

"It gave us ample time to plan and design the space properly." Mareenah admitted.

The delay helped as they didn't have any 3D renderings back then and just played around with the ideas in their head.

They knew exactly what they wanted while discussing their thoughts, so it's only a matter of expressing it in a concrete plan.

Because of this, they were able to communicate it well with their renovation contractor, who executed their plan correctly.

Majestic is their main contractor who did the hacking, tiling, electrical, plumbing, kitchen, and carpentry. The couple sourced the other vendors themselves and coordinated with them so as to fit their timeline.

Doing so also helped them to cut down the renovation cost.

Their experience with Majestic was good.

"We love how easy it was for us to communicate our ideas to them," she said. "They're very professional and were able to let us know what is more functional and which is more aesthetically pleasing." 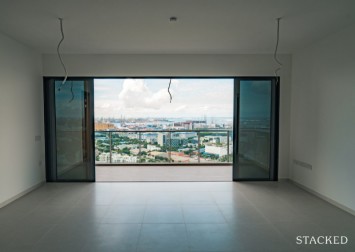 It's not common, but their renovation contractor enabled Mareenah and her husband to decide better on what design would align well with their lifestyle and everyday routine.

We asked her about their process of sourcing their furniture, and Mareenah replied that they had to carefully do this to make sure the pieces will be able to grow with them.

They also wanted to cut down on built-in furniture so they could bring them to the next house if they had to move in the future.

"Since our child was still young then, we did not go to many places while sourcing for furniture," she shared. "We did some research on the products online before visiting the stores to confirm our purchases."

All their customised furniture with rattan weavings are from Second Charm, while timeless furniture pieces such as bed frames, sofa, and chairs are from Castlery. Their decorative furnishings, like their Moroccan console and coffee table, are from Island Living.

"We also managed to score a couple of gems from Carousell and Marketplace, like the set of bedside tables and a pair of vintage chairs."

She said the rest are mostly from the ever-reliable Ikea.

For their favourite part of the house, it was hard to pick one, especially after the renovation.

Mareenah said they loved how their living room and the kitchen turned out, but if they really had to choose, it would be their living area.

"Our family spends more time there on a daily basis because it's simply cosy," she said.

"I especially love how open the shared spaces are so I could be cooking in the kitchen and my husband doing laundry, and at the same time we're able to watch over our son playing or watching TV."

It's the same experience when they have guests. While preparing food in the kitchen, they can easily host even if the guests are lounging in the living room.

The greatest challenge that Mareenah and her husband experienced during their renovation was keeping up with the timeline since they had to coordinate with Majestic and other vendors themselves.

While they did make some mistakes and had some flaws during the renovation period, they learned a lot along the way.

"We had a false wall arch partition done before the windows installation, so when we removed the windows, it ripped apart the sides of the partition."

The damage couldn't be undone, but she said they have learned to embrace it and other imperfections in a resale home.

The couple learned a lot, especially with regard to their timeline planning.

"Having gone through a renovation with a contractor, we learned to manage and plan different phases of renovation better."

She said if they have an opportunity to renovate their next home, they will plan the aircon trunking, plumbing lines, and electrical ahead of time.

Mareenah shares these invaluable insights with those who are looking to spruce up their homes.

"A house will always be a work in progress, so take your time to slowly transform your house into a home while fully living in it. The most inviting shared spaces are always both sculpturally appointed and thoughtfully undone."

And we couldn't agree more.