Malaysia election 2022: Woman contests as God of Prosperity because she has no candidate to vote for

Choy San Yeh (God of Prosperity in Cantonese) turns up to vote at the Malaysian general elections.

It's election season for our neighbours up north and with Malaysians heading to the polls today (Nov 19), one particular candidate stands out from the rest.

Instead of relying on her manifesto, Lian Choy Ling has been catching the attention of many with her chosen persona.

The independent candidate is running for the Seputeh seat under the moniker Choy San Yeh (God of Prosperity in Cantonese) in Malaysia's 15th general election.

Lian went all out by turning up fully dressed as the God of Prosperity when she placed her vote at SJK(C) Yoke Name in Taman OUG, as reported by Malaysian newspaper The Star.

Prior to this week, there was no inkling that the God of Prosperity would be participating in the elections.

Lian reportedly did not make an appearance on nomination day (Nov 5) as she had contracted Covid-19. Instead, a woman, said to be her twin sister, registered on her behalf, according to Sin Chew Daily.

Lian only introduced herself as a candidate on Nov 15 at the Seri Petaling night market in Kuala Lumpur.

With her loudhailer in hand, the 55-year-old tried to grab the attention of those walking by. 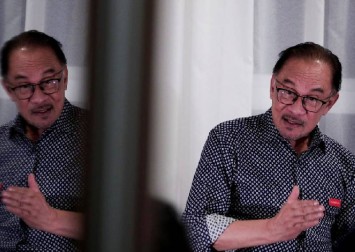 Lian said that she was contesting as she felt that there were no candidates to vote for.

When asked why she came out so late in the campaign, she told The Star that it was a strategy to get people interested in her.

"I think it has proven to be effective as now people remember the name Choy San Yeh," she said.

The accountant added: "It is my hope that I win this election with the least money spent and the least number of people on the team."